Support for Call to Lead Grows as Celebration Reaches West 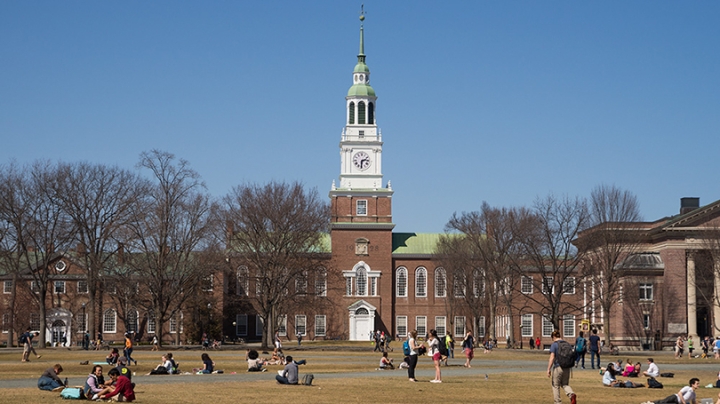 In less than a week, Dartmouth alumni, parents, and friends have made gifts and commitments of more than $100 million to support engineering, humanities, financial aid, entrepreneurship, and many other priorities through Dartmouth’s comprehensive campaign, The Call to Lead, said Board of Trustees Chair and Campaign Co-Chair Laurel Richie ’81 at a May 2 celebration in San Francisco.

“Already, many, many people in the Dartmouth community have stepped forward to answer the call,” Richie told more than 400 alumni and parents at the campaign gathering, which followed events in New York City on April 27 and in Hanover on April 30. “And they stand with us tonight as brilliant examples of what this campaign is all about.”

With these new gifts, Dartmouth has raised $1.6 billion toward its $3 billion goal. On May 2, President Phil Hanlon ’77 detailed several new gifts that will powerfully advance the College’s campaign priorities, including:

“We have a bold dream for Dartmouth—a sense of audacious ambition for this institution,” President Hanlon said. “The gifts announced today reflect the community’s support and resolve to achieve big things through the campaign.”

“Dartmouth has a way of educating thoughtful leaders—it’s about community, pride, passion, and changing the course of the world,” she said. “Dartmouth is also about exploring the world and achieving things together, both on and off campus. And, it’s about our fellow alumni, who are among the most committed and supportive in the world.”

The gift announcements in San Francisco reflected the growing presence and entrepreneurial spirit of Dartmouth alumni on the West Coast, said Rick Kimball ’78, a campaign co-chair and member of the board of trustees.

One of our goals through The Call to Lead is to enlist alumni and parents across the country, not only in supporting this vision financially, but in bringing it to life through internships and student engagement,” he said. “Whether you speak of the Bay Area venture and entrepreneur communities, the technologists in Seattle, or the entertainment industry in Southern California, Dartmouth alumni are leading with creative, influential voices.”

Since April 27, Dartmouth has announced:

Peggy Tanner ’79, a campaign co-chair and trustee, said Dartmouth has much to celebrate and many people to thank after the coast-to-coast events to launch the campaign.

“This has been a remarkable week of conversations with alumni, parents, students, faculty, and staff about the amazing collective potential made possible through The Call to Lead,” she said. “We’ve been overwhelmed with the support and the embrace of the very highest aspirations for Dartmouth. You can see the possibilities of what we can do when the whole community comes together like this. It energizes all of us for the important work ahead.”

Dartmouth plans additional campaign celebrations over the next year in at least 10 cities to ensure that all alumni and parents have an opportunity to participate.

At the San Francisco event, Richie called on the entire Dartmouth community to rally around the campaign vision.

“Tonight, together, let us send a bright flame of light out to alumni, parents, and friends, letting them know that Dartmouth’s future has never looked brighter,” she said. “To achieve that bright future, we need everyone to do their part. We need everyone, including you, to answer The Call to Lead.”