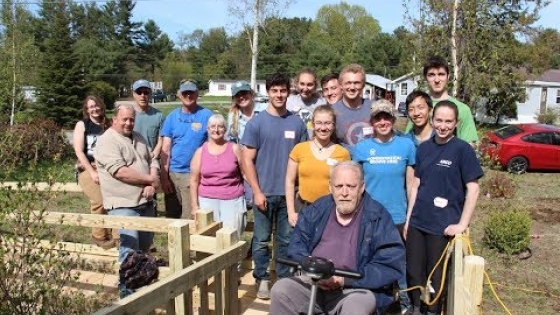 Volunteering With Cover is a video made by “COVER Stories” students about a group of Dartmouth Outing Club members making a home more accessible.
6/19/2018

College students can learn a lot by leaving campus and helping people whose homes are in need of repair, says Terry Osborne, a senior lecturer in the Environmental Studies Program and the Institute for Writing and Rhetoric who every spring teaches a course that gives his class an opportunity to do just that.

It’s called “COVER Stories: Community Building and the Environment.” Partnering with COVER, a nonprofit home repair organization based in White River Junction, Vt., small teams of students spend time off campus either helping to improve a property or working in the COVER store, which sells donated building materials and household goods at low cost. The students also interview COVER staff and clients to create stories, podcasts, and videos that COVER plans to include in its newsletters and on its website.

His students say the community service broadens their view of everyday life beyond Dartmouth.

“The educational idea behind this work is that by venturing beyond the classroom walls, not only are students reminded that there is a world beyond the Dartmouth campus; there is a world out there where the ideas they are studying are being applied in different contexts in complicated ways,” Osborne said at the last class, when they presented their final projects while sharing lunch with members of the COVER community.

“It’s always an amazing evolution. Many students haven’t had any experience with videography, yet in about six weeks’ time they develop projects that are aesthetically wonderful and have deep community resonance.”

One of those videos, shown above, by Michelle Wang ’21, Lizzie Thoni ’21, Sophia Domingo ’20, and Alex Wong ’21, shows members of the Dartmouth Outing Club helping to build a ramp for COVER client Ted Van Cleef, who tells them, “This is something I really need.” Before the ramp was built, Van Cleef says, he had to crawl to get to his car.

For Anoush Khan ’21, COVER opened a window into the lives of four people he might otherwise never have met. One couple, Terri and Rose Wheeler, was having trouble heating their drafty house, so a crew helped them weatherize it. 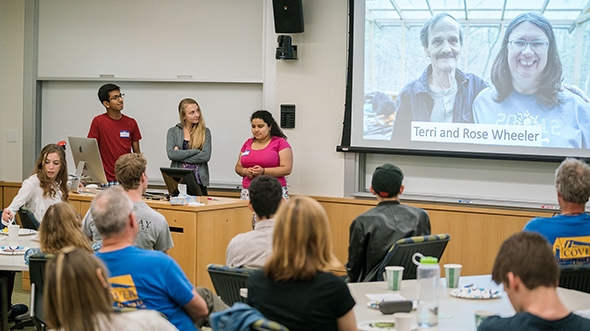 From left, behind podium, Anoush Khan ’21, Jamie Fenton ’20, and Meriem Fouad ’21 present an illustrated podcast they made for their “COVER Stories” class. (Photo by Eli Burakian ’00)

“For 40 years, Terri was a painter by day and a cook by night,” Khan’s team writes in their COVER story, which they turned into a podcast. “Since he was diagnosed with cancer, Terri has been out of work. Rose also doesn’t shy away from hard work, sometimes working 100 hours a week. She works at a mental health clinic in Vermont, always ready to help people.”

After COVER helped to lower their fuel costs, the Wheelers decide to return the favor by becoming volunteers themselves.

“‘COVER Stories’ proves that you can break through the Dartmouth bubble,” says Khan. “The campus can feel isolated from things that happen around it, and these interviews show that we are all part of the same group of people who don’t live far from each other.”

For another podcast, Khan’s team profiles Alice and Gary Lohutko, who needed an exterior ramp to make their home more accessible. Alice had become despondent about being housebound because of a disability. “When the work was finished,” the team writes, “Alice burst into tears. ‘I can’t tell you how much this has changed my life. I had no reason to live before.’” Thanks to the new ramp, the Lohutkos can get to medical appointments and to the local library.

Emily Baskin ’21 was on the team that interviewed workers in the COVER store. “Having seen the incredible impact that COVER has, our hope is that our media will help them raise money and raise awareness about what they do—maybe bring more foot traffic to the store—and help support the organization’s mission,” she says. “Many of us who worked with them in this course would like to continue working with them while we are at Dartmouth.”

Two COVER staffers, Miriam Jones and Kathy Partridge, came to the final class to share lunch with the students who had interviewed them for a video story. “It was such a joy to chat with them,” says Margaret Hubble ’21. “I hope our stories provide hope, so that if someone is going through a hard time, they’ll turn to COVER for support.”

Partridge says she was reluctant at first to participate in the class project but found Hubble surprisingly easy to talk to. Jones nods. “It’s easy to communicate over a shared task,” she says.

COVER Executive Director Bill Neukomm says the students are a welcome addition to COVER’s workforce. “It’s a great team effort. The home-repair projects are an opportunity to bring people together in a way that changes both the homeowners’ and volunteers’ lives. Everyone walks away with a different sense of their lives going forward.”

“COVER Stories” class is supported by the Dartmouth Center for Social Impact.