Focus on Faculty: Katherine Mirica on Chemistry as a Path to Improving Lives

The assistant professor talks about research, teaching, and looking at equations as poetry.

Katherine Mirica is an assistant professor of chemistry and head of the Mirica Group at Dartmouth College, a research laboratory that addresses challenges in health care, environmental stewardship, and microelectronics through innovations in materials chemistry. The Mirica Group has developed devices to detect toxic gases, “smart fabrics” that have the potential to offer protections for soldiers and emergency personnel, and other technologies. The recipient of numerous research fellowships and awards, Mirica joined the chemistry department in 2015.  She spoke recently with Dartmouth News about her research and about teaching at Dartmouth. (The interview has been edited for clarity and brevity.)

Let’s start by defining “materials chemistry.” Most people probably don’t know what it is.

It’s an emerging field that builds on the fundamentals of synthetic organic and inorganic chemistry, looking at the relationship between the structural properties of materials and their function. We use tools that chemists have developed to make materials from which new properties emerge.

Presumably you’re looking to make something useful and applicable to real life.

Yes. Materials chemists are interested not just in the structure of materials but also in their potential utility to humanity.

Are you on a quest for a holy grail?

There are many holy grails. My research is motivated in part by challenges in health care. We are faced with a growing, aging population, quality-of-life issues, and associated costs. I am particularly passionate about developing technologies that can enhance diagnostics and improve the quality of life for people living with chronic diseases.

Our current focus is on sensors, which we hope could help people monitor diagnosed diseases that require continuous management. For instance, ultimately one could do breath analysis. The metabolites that we exhale are related to our internal well-being. For a person with diabetes, there are actually signature volatile molecules exhaled that correlate with blood glucose levels. Potentially, you could have a noninvasive Breathalyzer for blood glucose based on its metabolism.

That’s a great example. Your research extends beyond health care, though, into many other fields.

Right, it’s very multidimensional, but there are some cross-cutting themes.

I’m holding a prop. Can you see what it is?

You’re smiling, so I think you know why I brought it. Can you explain how you use everyday materials such as No. 2 pencils in your laboratory?

When I look for solutions to problems, I try to think of very simple approaches that could potentially incorporate everyday experience. During my postdoctoral work at MIT, I was faced with a challenge that involved the integration of carbon nanotubes into a functional sensor. I was inspired by pencil drawing as a way to deposit carbon on surfaces; carbon nanotubes are related to graphite, one of the main components in a No. 2 pencil. So, we made a pencil out of carbon nanotubes that enabled the fabrication of sensors by drawing.

You’ve developed very small materials. Nanotechnology holds so much promise, and yet human-made nanoparticles introduce environmental and health risks. How do you evaluate those risks?

I think materials on the nanoscale are just an extension of materials on any other scale; they’re larger in scale than the atomic and molecular components and smaller than macroscale components. Biologically, much of the machinery of our bodies is on that nano scale. But when we make a new nanomaterial, we certainly have to consider its implications for society, both positive and potentially negative, and I think it’s really important to be aware of that and to take the necessary precautions and also do comprehensive studies to investigate risks that those materials pose.

Are you hoping to commercially develop any of the materials you’re making?

That would be exciting, but my current priority is to focus on the fundamental science and to be a teacher-scholar, and to focus less on being an entrepreneur. We patent as much as we can patent. We build up intellectual property. If my students ever wanted to venture out and take those patents and do something with them, that option would be open to them.

Your mother is also a chemist.  Did she inspire you by talking about her work?

I learned a little bit about what she was doing. I grew up in the Soviet Union, when it was still intact. My mother worked on classified research during that time in eastern Ukraine, in a very industrial town called Rubizhne. She was trained as a specialist in explosives chemistry. When the Soviet Union fell apart, the chemical plant where she worked switched from making explosives to making shampoos and commodities. The priorities at the very forefront of the Soviet agenda collapsed, and people had to find a completely different way of surviving.

So your family left Ukraine.

We left in 1996, right before I started high school.

What was that like? Did you speak English when you arrived in the United States?

I certainly wasn’t fluent. I was in ESL (English as a second language) classes for the first four months.

I wonder if you eventually turned to chemistry because it is a universal language.

It’s true. Watching my mom with very limited English adjust to her new life by being able to secure a job because of her knowledge of chemistry was very inspiring.

There are 118 elements in the periodic table. Which one best describes your personality?

My favorite element is bismuth, element No. 83. It’s the biggest relatively stable element, and it has a lot of unconventional properties. It’s relatively nontoxic among heavy metals, being a key ingredient in some medications, such as Pepto-Bismol.

What are your unconventional properties?

Just like bismuth, I consider myself to be relatively stable and nontoxic, yet highly versatile.

Do you think someday your versatility will lead you to discover a new element called Miricium?

That would be fun. I think my research is beyond elements, though. My group focuses on building materials from smaller molecular parts. We’re working on “self-assembly,” focusing on materials that make themselves in a very strategic way by harnessing the fundamental principles of chemistry.

Women are well represented in your research group. Do you encourage them to apply?

I do. I very actively recruit from Dartmouth’s Women in Science Program, which seeks to engage female undergraduates in research as soon as possible. Students interview for these competitive positions during the fall of their freshman year. By winter term, they’re in the lab, at the frontier.

You once said you admire the fabled physicist Richard Feynman, who was considered a great teacher. How do you teach general chemistry so that it’s engaging and fun?

I try to convey my excitement about the subject matter by doing a lot of experimental demonstrations. This way, the students can see the chemistry in action as we develop and discuss the intellectual tools for understanding that action. I also try to get the students to look at equations as poetry, as statements of truth that describe the physical world that we live in, just as poetry can be statements of truth about our soul. 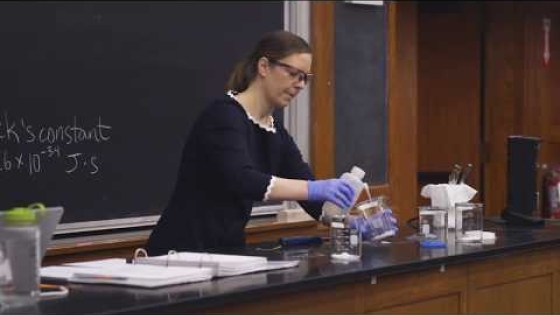 “There are many holy grails. My research is motivated in part by challenges in health care,” says Assistant Professor Katherine Mirica. (Photo by Robert Gill)
Written by
Kathryn Stearns
Share this
FacebookTwitterEmailCopy a link to this article
Articles