At the 2018 commencement ceremony, Frank J. Guarini received an honorary degree from Dartmouth. 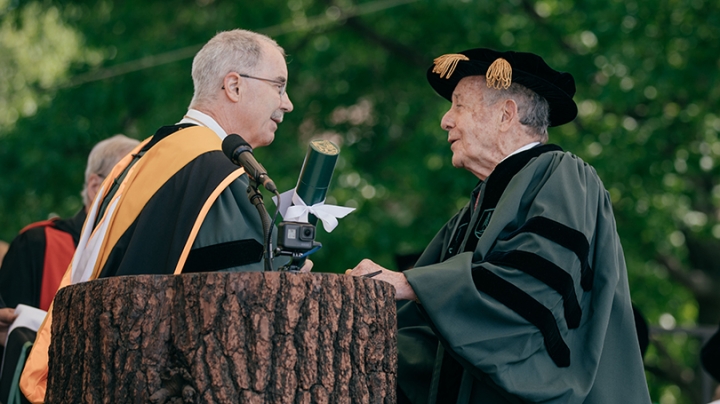 FRANK J. GUARINI, through your distinguished career in public service in the U.S. and abroad, you stand as an exemplar of international understanding, responsible leadership, and global citizenship.

A member of the Great Dartmouth Class of 1946, you valiantly served your country in WWII, where you earned a Naval Commendation Medal and Three Battle Stars. You went on to earn your law degree at New York University and continued your post-graduate studies in the Netherlands at the prestigious Hague Academy of International Law.

In two terms as New Jersey State Senator and in seven terms as a member of the U.S.  House of Representatives, you served your constituents and your country with sensitivity and diplomacy.

Armed with the message that “trade is the currency of peace,” you served on Congressional trade missions to every continent, promoting closer trade relations with all sovereign nations. You were actively involved in the enactment of Free Trade Agreements with Canada, Mexico and Israel; the Tokyo and Uruguay rounds of GATT; and the Caribbean Basin Initiatives that helped to establish a trade policy with our Caribbean and Latin American neighbors. At the same time, you worked to modernize our trade and tariff laws and became an outspoken advocate for fiscal responsibility.

In 1994, you were appointed by President Bill Clinton as U.S. Representative to the United Nations General Assembly. You extended your global impact through philanthropy.  Your belief in the power of your Dartmouth education led you to become one of the most generous donors in our institutional history, ensuring that those who follow not only have the same transformative experience, but the global perspective needed to succeed in today’s world.

For your outstanding contributions to international trade law, for your exemplary service as a veteran and elder statesman, and for your extraordinary commitment to educating and cultivating the next generation of global leaders, Dartmouth is proud to award you the honorary degree of Doctor of Humane Letters.