The sociologist and South House professor will serve a one-year appointment. 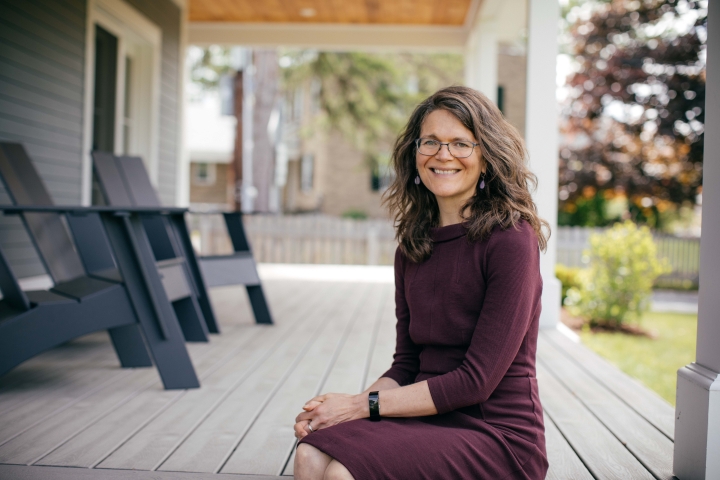 Professor Kathryn Lively will continue as house professor of South House during her tenure as interim dean. (Photo by Robert Gill)
6/13/2018
Body

Kathryn Lively, a professor of sociology and the inaugural house professor of the South House residential community, will serve a one-year appointment as interim dean of the College starting July 1, Interim Provost David Kotz announced today.

Lively is stepping in as Rebecca Biron, a professor of Spanish and comparative literature, returns full-time to teaching and research after a three-year term as dean.

“As a house professor, Kathryn has been integral to the successful launch of the College’s house community system,” Kotz says. “Her creative leadership demonstrates a profound commitment to student learning and well-being, and to creating a more inclusive and welcoming climate for all students on campus. I’m delighted that she has agreed to take on the role of interim dean.”

The dean of the College is Dartmouth’s senior officer responsible for undergraduate academic life, overseeing the division of student affairs and leading the house professors and Dartmouth’s six house communities.

“I’m very excited to take on this role, which is a unique opportunity to promote co-curricular life and the relationship between student affairs and academic success,” Lively says.

Lively will continue as house professor of South House during her tenure as interim dean. “I’m committed to the house system,” she says. “Over the past two years, we’ve seen a wonderful rise in the level of community and leadership within the houses. We’re seeing an increased sense of community within the residence halls, stronger friendships, and students taking part in creating the type of programming they want to participate in.”

Lively, who joined the Dartmouth faculty in 2002, earned her PhD in sociology from Vanderbilt University, and describes her research interests as being “at the nexus of identity, emotion, and culture.” Her recent research has focused on identity loss among elderly patients with Alzheimer’s disease and identity change among people who have experienced significant weight loss.

As interim dean, Lively will serve as a member of the president’s and the provost’s leadership teams, promoting the integration of academic life into the full range of student experiences, providing direction on student inclusivity and diversity issues, and participating in strategic planning.

Lively says her vision for the role has been shaped by her predecessor. “It will be a very hard task to fill Rebecca Biron’s shoes,” she says. “It’s under her leadership that the house system got started, on an incredibly short timeline. She created a team that allowed us to build teams within the houses and brought out the best in everyone. Through her, I’ve learned to keep my eye on the bigger picture and to remember why it is that we do this work. She’s been inspirational.”

Kotz agrees. “I’m grateful for the leadership Rebecca has shown during a time of great, positive transformation of student life,” he says.

Lively was selected as interim dean by a search committee that included Carolyn Gordon, the Benjamin Cheney Professor in Mathematics; Thomas Cormen, professor of computer science; Craig Sutton, associate professor of mathematics; Laura Hercod, chief of staff in the Office of the President and secretary to the Board of Trustees; and Dino Koff, director of financial aid.