Ricki Stern ’87: ‘Art Connects You to the World Beyond You’

The filmmaker spoke at the annual arts awards ceremony at the Hopkins Center. 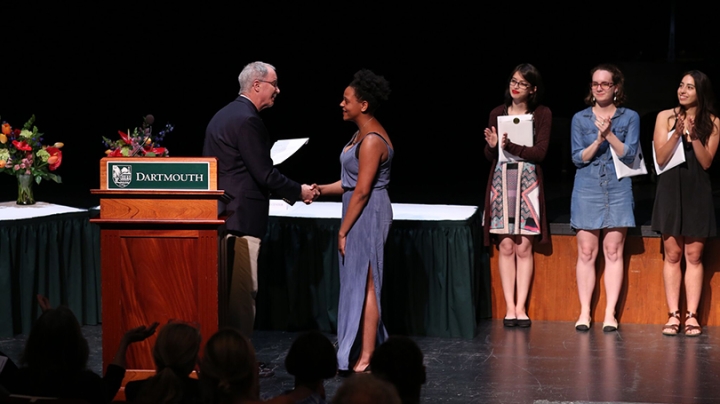 “Dancing, singing, filmmaking, theater, painting, sculpting—they’re the essence of your identity,” filmmaker Ricki Stern ’87 told student honorees in her keynote speech at the May 29 annual arts award ceremony at the Hopkins Center for the Arts. “You bring your creativity, your drive, your vision to whatever you do on campus.”

With her filmmaking partner, Annie Sundberg ’90, Stern has won critical acclaim for provocative documentaries, including Marathon: The Patriot’s Day Bombing, Joan Rivers: A Piece of Work, and The Devil Came on Horseback (about the conflict in Darfur). Yet in her address, punctuated by video clips, Stern said that she sees flaws in every film she has made. From trial and error, she says she has learned her craft.

“You are processing the world through your art, and that makes you vulnerable, but I encourage you to embrace this risk. Being willing to fail is essential to creating art,” Stern said.

Creative output enlivens Dartmouth every day, says Hopkins Center Director Mary Lou Aleskie. “This is a vibrant, strong, and vital arts community, and we are together making changes in the world by the stories we tell.”

“Today is about the present, as we celebrate and congratulate the students who have not only engaged but excelled in all that the arts have to offer,” said President Phil Hanlon ’77, as he listed the events he and his wife, Gail Gentes, attended this year at the Hop. “I say to the students, your unique self-expression enriches our campus in ways that are deeply meaningful and make Dartmouth a special place for us all.”

The ceremony showcased a few works of student art, beginning with an excerpt from Citrus, a senior fellowship project by Celeste Jennings ’18. It’s a choreopoem that uses movement, words, music, and costumes to explore the struggles and resilience of black women from about 1840 until the present. The scene Jennings chose to present is about the Little Rock Nine, African American students who, braving taunts and threats of violence, entered one of Arkansas’ racially segregated high schools in 1957.

“I’m from Arkansas,” she said. “I grew up with the Little Rock Nine story. I’m passionate about theater, costume, and about studying my family.” Both her mother and her father, who is the oldest of 14 children, come from small towns in Arkansas. “I am so interested in how my huge family has shaped who I am, telling me about what it was like growing up in poverty in the ’60s in the South.”

Jennings received from President Hanlon the prestigious Sudler Prize in the Arts, named for its benefactor. A lawyer from Chicago, Louis Sudler established an endowment providing an annual cash award to a student recognizing “outstanding excellence in the creative or performing arts.” The Sudler is always awarded to one of the Marcus Heiman-Martin R. Rosenthal ’56 Achievement Award winners, and this year, there were 10 of those.

The Sudler recipient is always kept secret until the end of the awards ceremony. When she heard her name, Jennings was thrilled.

“It’s a huge deal because they looked at all the students who got a Rosenthal Award, and it’s just really crazy that they chose me and my theater piece,” said Jennings after the ceremony. She plans to enter Citrus in playwriting contests and festivals. “Maybe I could even find someone to produce it,” she said.

“She can take that play straight to New York,” Aleskie predicted at a reception in the Jaffe-Friede Gallery following the awards event.

An exhibition of work by senior art majors will be on display at the Jaffe-Friede and Strauss Galleries in the Hop and at the Black Family Visual Arts Center through June 17.

See a full listing of the 2018 arts awardees at the Hopkins Center website.