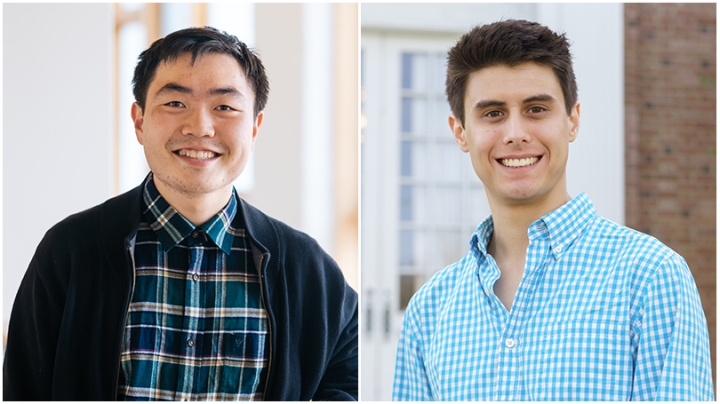 Christopher Kymn ’18 and Trevelyan Wing ’14 have been offered fellowships to study in Germany next year through the Deutscher Akademischer Austausch Dienst (DAAD), the German Academic Exchange Service.

The DAAD supports programs and funding for American and Canadian students, faculty, researchers, and others in higher education to study in Germany, promoting international cooperation.

Kymn, a double major in computer science and philosophy modified with neuroscience, will use the fellowship to earn a master’s of science degree in neurosciences at Ludwig-Maximilians-Universität in Munich.

Originally from Palos Verdes, Calif., Kymn spent his sophomore fall as an exchange student in Seoul, South Korea—an experience that whetted his appetite for study abroad. “I thought it would be nice to try studying in Europe after Dartmouth, and I knew that Germany had good neuroscience programs,” he says.

The program at LMU-Munich “intersects well with the education I’m fortunate enough to have had at Dartmouth,” he says. “I’m interested in brain circuits and the computational mechanisms behind them, the algorithms we might be able to derive from them, and what that means for bigger questions, like consciousness, free will, and emotions.”

At Dartmouth, he worked in the Brain Engineering Laboratory led by Richard Granger, a professor of psychology and brain sciences. “That has taught me not just more about computational neuroscience, but about how to be a responsible researcher and how I can perform original research that is meaningful and makes a contribution that can stand the test of time,” Kymn says.

He discovered an interest in teaching, served as an undergraduate teaching assistant in computer science and as a leaning assistant for a classics class on ancient philosophy. He is also a member of the Dartmouth Parliamentary Debate Team and has spent several summers as an instructor at high school debate camps.

His ultimate goal is to pursue a career in academia. “I want to be able to pursue research interests and collaborate with amazing people, but it would also be an opportunity to teach and share the knowledge that I’ve learned, and give back. That’s really exciting for me.”

“Germany is a world leader when it comes to renewables—key for achieving a low carbon future—and its energy transition is setting an example for other countries,” Wing says. “My long-term ambition is to work at the intersection of science and policy to help governments and other bodies adopt sustainable practices towards the end goal of creating a genuinely green global economy.”

Originally from Falmouth, Mass., Wing majored in history with a concentration in international relations, modified with environmental studies, earth sciences, and African and African American studies. Dartmouth, he says, “awakened my interest in environmental issues.”

“As a Great Issues Scholar freshman year, I had the opportunity to meet figures like Inuit activist and Nobel Peace Prize nominee Sheila Watt-Cloutier, who inspired me to study the far-reaching effects of climate change on human populations.” A Stefansson Fellowship allowed him to follow that inspiration to the Arctic. “I lived among indigenous reindeer herders to understand how climate change was impacting their way of life.”

He also led the Dartmouth Council on Climate Change and was selected by the U.S. State Department as an American delegate to the first UN Global Youth Summit in Costa Rica. After graduation, he received a Lombard Public Service Fellowship, which he used to highlight challenges facing native communities most affected by climate change. “I founded the Indigenous Youth Forum on Climate Change—a virtual initiative connecting young people worldwide to raise awareness, promote dialogue, and encourage knowledge exchange, and represented this organization at the 2015 UNESCO Indigenous Peoples and Climate Change conference as part of COP 21,” he says.

“None of this would have been possible without Dartmouth’s support, and the incredible opportunities it has afforded me through the years.”

To learn more about how to apply for DAAD fellowships and other programs, visit the Office of Fellowship Advising.