Analysis of the rare fossil provides new perspectives on walking and climbing.

“This particular fossil, because of its completeness, and because of its developmental age—being a child—is special,” Associate Professor Jeremy DeSilva says. (Photo by Eli Burakian ’00)
7/10/2018
Body

“For the first time, we have an amazing window into what walking was like for a 2½-year-old more than 3 million years ago,” says Associate Professor Jeremy DeSilva. “This is the most complete foot of an ancient human ancestor or extinct relative ever discovered.”

The tiny foot, about the size of a human thumb, is part of a nearly complete 3.32-million-year-old skeleton of a young female Australopithecus afarensis discovered in 2002 by anthropologist Zeresenay Alemseged in the Dikika region of Ethiopia.

DeSilva, one of the world’s foremost authorities on the feet of our earliest ancestors, says, “We’ve never had anything this complete from a child before.” 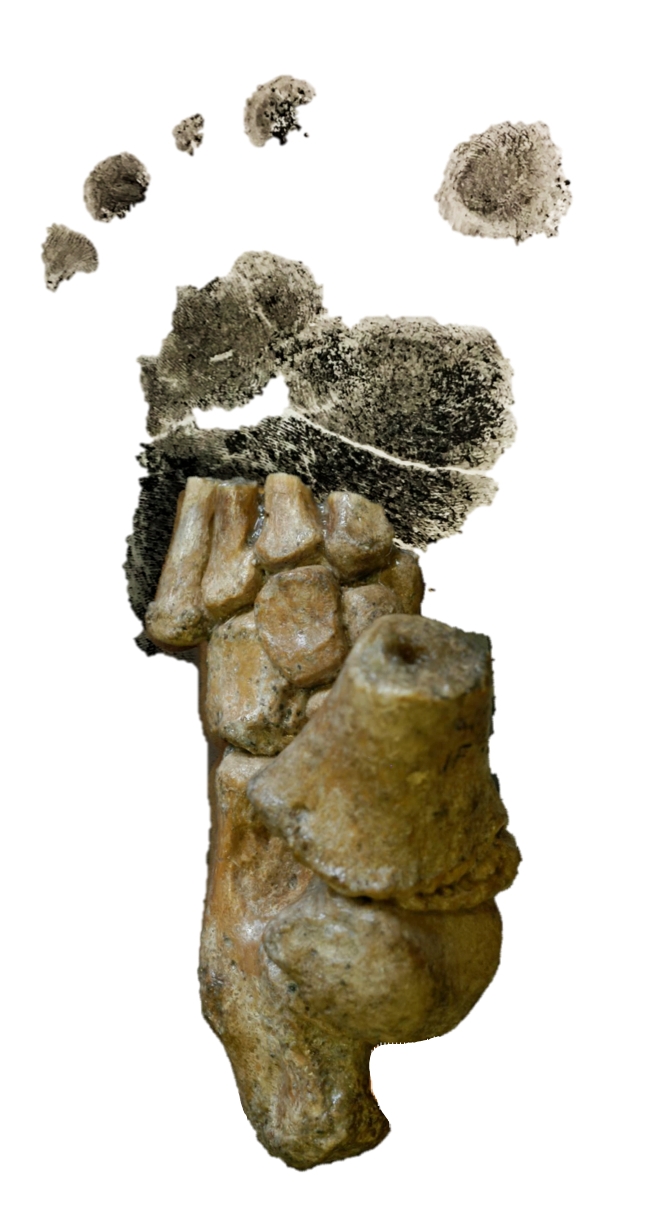 This is the 3.32 million-year-old Australopithecus afarensis foot from Dikika, Ethiopia, superimposed on a footprint from a human toddler. (Photo courtesy of Jeremy DeSilva)

As it is the same species as the famous Lucy fossil and found in the same vicinity, it is not surprising that the Dikika child was erroneously labeled “Lucy’s baby” by the popular press, though this youngster lived more than 200,000 years before Lucy. DeSilva, Alemseged, and their colleagues have just published their analysis of the foot in Science Advances.

“Fossils are just rocks,” says DeSilva. “We try to flesh them out and bring them back to life, and reconstruct what life was like for these things so long ago, and what anatomies were key to their survival. Understanding how they survived is critical for understanding ourselves.

“There is the thrill of the discovery itself,” he says. “And then there is the question of what it actually tells us about the evolution of humans—and that, of course, is what I get excited about.”

Based on the evidence of their bones, these ancient ancestors stood on their two feet and walked upright, he says. “The bones, and even footprints tell us that Lucy and her kind walked a lot like us. If you are a bad upright walker, you are going to get eaten by leopards and go extinct.”

The Dikika foot is one part of a partial skeleton of a 3.32 million-year-old skeleton of an Australopithecus afarensis child. (Photo courtesy of Zeray Alemseged)

But they did not die out. The fossil record shows that Lucy’s kind persisted for over a half-million years. “This tells us that whatever they were doing, they were doing it right,” says DeSilva. “The fossils show us they were walking on two legs and that they were quite good at that.”

He says at 2½ years old, the Dikika child was already walking on two legs, but there are hints in the fossil foot that she was still spending time in the trees, hanging on to her mother as she foraged for food. “To us, it looks like being in the trees, at least occasionally, was a regular part of their routine, especially for the kids. Also, if you were living in Africa 3 million years ago without fire, without structures, and without any means of defense, you’d better be able get up in a tree when the sun goes down.

“This particular fossil, because of its completeness, and because of its developmental age—being a child—is special,” DeSilva says. “I am beginning to see a day in the life of an Australopithecus group, kids and all, in ways I have never been able to before.”