Roberta Stewart holds a workshop for those who run the book groups, or want to. 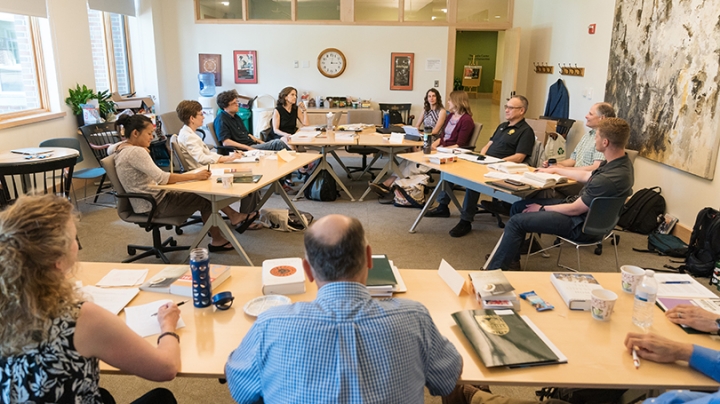 Professor Roberta Stewart, at left near back wall, leads a discussion on Homer’s Odyssey during a workshop that draws parallels between the epic poem and modern veterans’ experiences. (Photo by Eli Burakian ’00)
7/05/2018
Body

Twenty-two people from across the U.S. gathered on campus recently for five days to discuss Homer’s Odyssey. Their goal: to use the epic poem to draw parallels between war hero Odysseus’ long journey home after the Trojan War and the struggles veterans face today.

The group included a linguist, an archaeologist, a high school teacher, veteran clinicians and service providers, and Dartmouth student veterans and alumni, among others. They were there because a Dartmouth professor was inspired more than a decade ago to start a book group for veterans, focusing on the Iliad and the Odyssey.

Roberta Stewart, a professor of classical studies, got the idea to use Homer’s works as a basis for thinking about modern military veterans’ experiences in 2003 after noticing similar themes in both the ancient texts and an active duty serviceman’s blog posts. She has been leading book groups for veterans in the area since 2007, as a volunteer, co-facilitating each 15-week series with a veteran. Stewart’s aim is to facilitate veterans’ engagement with world literature that gives expression to the experience of war as a means to develop veterans’ own narratives of war and homecoming. She also wants to show how the humanities can speak to the significant problems of our world.

Word spread, and groups began to form in other places.

The workshop represents the first time that participants from across the country have come to campus to strategize about running the groups, thanks in part to funding from Dartmouth. Book group facilitators and would-be facilitators attended from Texas, Pennsylvania, Massachusetts, Connecticut, New York, New Jersey, Vermont, and Alaska.

“We brought together clinicians, academics, and military personnel, including Dartmouth veteran students and alumni, for an extended, intensive dialogue on the value of Homer’s Odyssey for homecoming,” said Stewart. “The workshop represents a pilot to test the ability to develop a national network of co-facilitators who work pro bono to run groups nationwide. The coming months will test the work that we did and the networks we established, which will hopefully touch a wider range of military personnel, including active duty and student veterans, among others.”

In a series of workshops, including a guest lecture by President Emeritus James Wright, participants spoke on topics that can be found in Homer’s work and are issues common to both current and ancient veterans—such as the influence of fate; agency of the individual; infidelity while partners are physically separated; the lack of knowing a family endures when someone goes missing in action; the suffering a community feels when someone is deployed; and the differences between cultures.

They also discussed one of the challenges of the book groups: getting veterans to open up.

“How do we ask questions so people don’t depart the conversation by getting lost in the library of their own trauma experiences?” asked Elisabeth Parrott ’95, a clinical psychologist at the Lowell Vet Center in Lowell, Mass.

Josh Cox ’15, a former Marine who was twice deployed overseas and is now a technician at Beth Israel Deaconess Hospital in Needham, Mass., has participated in several of the book groups. He attributes much of the groups’ success to the camaraderie that develops among the veterans as they work their way through the texts.

“I think it really is helpful, because you’re not in a clinician’s office where it’s very formal and there are these boundaries and these guidelines and it’s very structured,” said Cox. “I know when I’m in a psychologist’s or psychiatrist’s office, talking to them about that stuff, unless they’re a combat clinician who has actually seen combat, I don’t feel like there’s any way they could ever understand getting ambushed and the roar of machine guns firing at you, or picking up your friends’ body parts after an IED blast. But when you’re in a small community of other veterans who have had similar life experiences, you feel like you connect a little more.”

Cox also credits Stewart with knowing how to get the conversation flowing and knowing when to step back and create an environment where veterans can feel safe speaking about their pasts.

Stewart wants to make the workshop an annual occurrence at which members of the network she’s establishing gather to talk about their ideas and progress. She’s pleased that what she started 11 years ago as a single book group in White River Junction is reaching veterans across the country.

“It was personally gratifying to experience the interest and commitment for building a reading program for veterans,” said Stewart. “The intellectual energy was fireworks.”

Julie Bonette can be reached at Julie.Bonette@dartmouth.edu.