The visit to Congress started with an early-morning rendezvous and photo session on the Capitol steps. 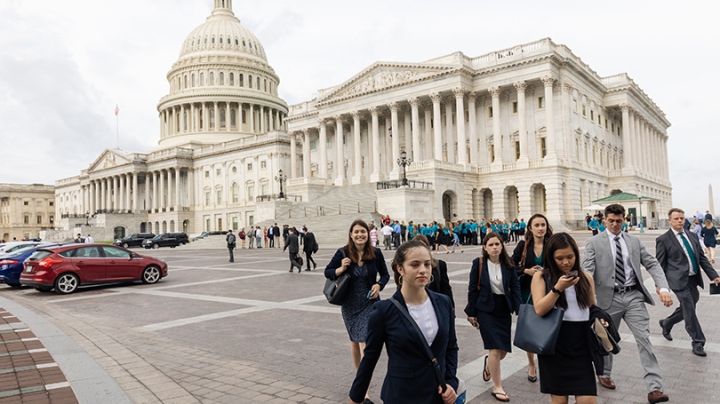 Students head for meetings with lawmakers in the House and Senate on a trip to Capitol Hill with the Rockefeller Center’s First-Year Fellows program. (Photo by Seamore Zhu ’19)
7/11/2018
Body

The day on Capitol Hill started with visits with Sen. Angus King ’66 (I-Maine), and Rep. Ann Kuster ’78 (D-N.H.) and was capped with a free-for-all search by each of the 25 First-Year Fellows to find their hometown member of Congress and hand-deliver a personal constituent letter.

The students were participating in the Nelson A. Rockefeller Center’s week of civic training in Washington, D.C., which serves as an orientation for their eight-week internships in federal agencies, nonprofits, and NGOs over the summer.

King welcomed a group of students into his office for a discussion about public policy, partisan politics, and the challenges of politics in the nation’s capital. He told the fellows that the key to crafting successful policy is to remember that the point is to help people, not members of a party or a constituent group.

Of his decision to remain an independent in the Senate—there are only two, King and Sen. Bernie Sanders of Vermont— King said, “It has enabled me to form relationships on both sides, which is one of the reasons I came here—to try to foster a little bit more bipartisanship. It’s really hard, though, in this polarized climate.” 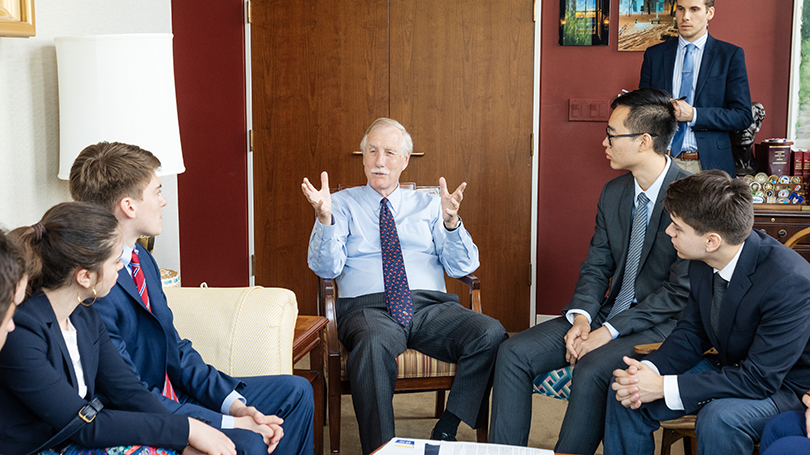 He spoke to the students for more than half an hour. Waving off an aide who was motioning to his watch, King offered the students some parting advice about their time at Dartmouth.

“Drink it in. Get all the experiences you can gather,” King said. “The other piece of advice is, rather than choosing courses, choose professors. Find out who the really good professors are—even if you’re not fascinated by what it is they’re teaching—and take that class.”

The Foundations of Leadership

Each year some 25 First-Year Fellows are selected to take part in summer internships with public policy mentors—the majority of whom are Dartmouth alumni. It is the foundation of the Rockefeller Center’s public policy and leadership curriculum that includes programs such as the Policy Research Shop, the Rockefeller Global Leadership Program, and the culminating Rockefeller Leadership Fellows designed for seniors.

Rockefeller Center Director Andrew Samwick, the Sandra L. and Arthur L. Irving ’72a P’10 Professor of Economics, started the civic skills training for the First-Year Fellows 14 years ago to give the students a solid understanding of the structure and professional standards of public policy organizations, to help them be successful in their internships.

Speaking to the fellows at a reception with Dartmouth alumni and mentors from the Washington area at the close of the week of training, Samwick said, “After this week, when I can assure you that you will learn many things every day, you have to be on your own, you have to be a little bit more judicious, and you have to pick the opportunities that you can find to help your organizations to help public policy be just a little bit better.”

“And one of the nicest things about Washington is that there are many, many people here trying to do exactly the same thing.”

Navigating the Halls of Power

The visit to Congress started with an early morning rendezvous and photo session on the Capitol steps. Then the fellows broke into two groups—bound for the House or the Senate—and headed to meetings with lawmakers Kuster and King, and visit the office of Sen. Kirsten Gillibrand ’88 (D-N.Y.), who was not able to attend the meeting. Then the first-years set off on their own, letters in hand, to find the office of their hometown member of Congress within the sprawling Capitol Hill building complex.

Stephen Karol ’21 of Canton, Mass., was racing through the Hart Senate Office Building, looking for the office of Sen. Elizabeth Warren (D-Mass.). He carried a letter urging Warren to oppose a proposed concealed-carry reciprocity bill.

“It would allow people who get a concealed weapon permit in one state to carry in states that have stricter permit laws, like Massachusetts,” Karol said. “I’m pretty sure she opposes it, but I wanted to let her know that I support that position.”

Karol walked into Warren’s office, explained why he was there, and asked to see the senator. The staff assistant who greeted him said that Warren was not in the office, but she went off to see if Warren’s legislative correspondent, Zak Doenmez, could meet for a moment. She returned with Doenmez’s card, gave it to Karol, and took his letter with a promise that he would hear from Warren by letter. 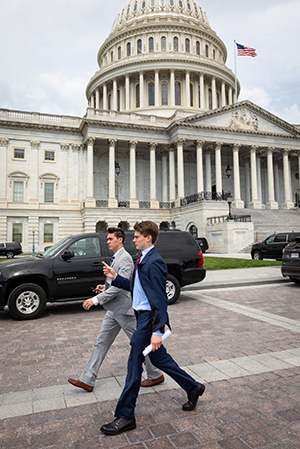 Harish Tekriwal ’21, from Richmond, Va., caught up with Karol and Walter Cook ’21 as they rushed past the Capitol Dome toward the Rayburn House Office Building, where Cook planned to deliver a letter to Rep. Greg Meeks from New York’s 5th Congressional District in support of additional FEMA funding for the victims of Hurricane Sandy.

Tekriwal described the scene when he delivered his letter, about managing deficit spending, to the office of Sen. Tim Kaine (D-Va.).

“When I walked in a lot of people were huddled in a circle and there was a lot of commotion. They were in very, very intense conversation. Eventually, one of the staff looked up and said, ‘Can I help you?’ I told him I was delivering a constituent letter. He said, ‘The Senator is busy right now, just leave it on the desk. I’m really sorry, please come back another day.’ ”

The Meaning of Public Service

Rockefeller Deputy Director Sadhana Hall, who oversees the center’s leadership curriculum, and Associate Director of Curricular and Research Programs Ronald Shaiko, who guides the public policy curriculum, have led the civic training program since it started.

“This program would not exist without them,” Samwick says.

Shaiko says that the day on Capitol Hill—which breaks up the week of seminars, panel discussions, and small group workshops—has two objectives, to underline the idea that it is every citizen’s right to engage with their public officials, and to help the fellows understand how the conduct of the least senior staffer reflects on the institution they are working for.

“Our 25 fellows had 25 different experiences today, some positive, some not so positive. We know this is going to happen every time we do this,” Shaiko says. “When we debrief, we ask, how far up the food chain did you get? Did you see your member of Congress, even though you were not an invited guest? Then we also ask, how were you treated?”

“We want to plant a seed, so when they start as a new intern on Monday morning, they know they have to be at their best when they’re interacting with people, not only with their cohort in the workplace, but also with the people who come through the door, without making judgements about who is important and who is not, and who has a right to be there,” he says. “Everyone has a right to be there.”