The $7.5 million expansion and renovation will provide enhanced training facilities. 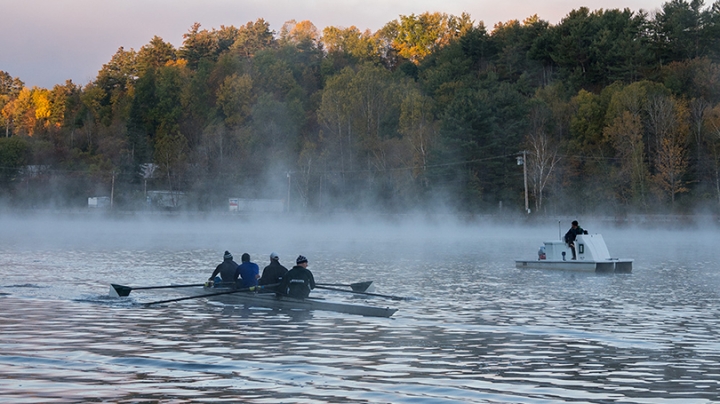 An early-morning rowing practice is underway on the Connecticut. (Photo by Eli Burakian ’00)
7/09/2018
Body

A $7.5 million expansion and renovation of the Friends of Dartmouth Rowing Boathouse will provide enhanced training facilities that could make up for what has often been rowers’ inability to get on the water in time for the Feb. 1 start of the spring crew season.

The challenges of getting adequate training time on the water put Big Green rowers at a disadvantage when compared to their peers, say Dartmouth rowing coaches.

But that disadvantage could be greatly reduced by these improvements; work on them is scheduled to begin this summer.

At their June meeting, College trustees approved a design for the facility, located on the banks of the Connecticut River. In addition, the College received site plan approval from the town planning board on June 5.

The upgraded facility, which is scheduled to be ready for use in fall 2019 under the current building timetable, would include state-of-the-art moving-water rowing tanks to better simulate rowing on the river, an improvement over the existing still-water tanks in Alumni Gymnasium.

“This facility would help us recruit and also overcome some of the challenges in gaining water time,” says Wyatt Allen, coach of men’s heavyweight rowing.

Andre Hunter ’83, president of the Friends of Dartmouth Rowing, says, “Our programs are stronger than ever, and this addition to the boathouse will help us stay on an upward trajectory.”

About 120 athletes participate in rowing in spring and fall seasons. There are three varsity teams—one for women and two for men, lightweight and heavyweight crews.

“Crew is a very technical sport, and you want your tanks to simulate the actual technique of rowing,” says Wendy Bordeau, head coach of the women’s team.

The project will be funded entirely through gifts, as will an endowment supporting the operation and maintenance of the facility.

“This generosity shows the alumni commitment to the sport,” says Allen, adding that special thanks go to Hunter and to Bill McNabb ’79, a member of the Dartmouth Athletics Advisory Board, who both led the fundraising effort.

The existing boathouse, which opened in 1986, was not built to be a training center, but a social space with a fireplace and carpeting and a place for boat storage. Over the past 30 years, the boathouse has evolved into a training space equipped with several dozen indoor rowing machines, called ergometers.

“The nature of the sport has changed,” says Deputy Athletics Director Robert Ceplikas ’78. “There used to be very limited rowing at the high school level. Now every college team is trying to recruit experienced first-year rowers.”

In addition to the expansion, the proposed work includes renovations to the existing boathouse to improve ventilation, life-safety systems, and other upgrades. The existing building will continue to house training ergometers, locker rooms, and boat storage, while the addition will contain space for ergometers, new rowing tanks, and a multi-use lounge that will connect the two buildings. An outdoor patio will allow rowers to move the ergometers outside for training exercises.

“The renovations will consolidate all of our training facilities down at the river, in spaces that are designed specifically for rowing,” says Bordeau.