As director, Palacios will mentor students and support Native activities on campus. 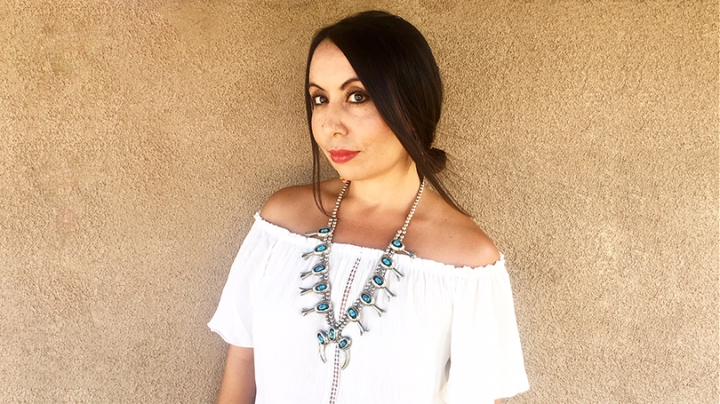 Sarah Palacios has been named director of the Native American Program (NAP), Interim Dean of the College Kathryn Lively announced today. She begins the role Aug. 8.

“Sarah brings a passion for Native issues and especially for helping Native students bridge their cultural identities and their academic studies,” says Lively. “I’m delighted that she will be joining the Dartmouth community.”

NAP was founded in the 1970s, when the College rededicated itself to its founding mission of educating Native students. NAP partners with the College and tribal communities nationally to “assist in students’ personal, social, intellectual, and ethical development so they can become life-long learners and responsible leaders,” according to the program’s mission. Dartmouth has the highest rate of Native American undergraduate enrollment and the most Native American alumni in the Ivy League.

An enrolled member of the Pueblo of Pojoaque, Palacios is a 2005 graduate of Stanford University, where she majored in cultural psychology and wrote an honors thesis on Native American health and identity.

In December 2017, after what she describes as “one of the scariest experiences of my life”—when she and her 6-year-old daughter were evacuated during the Thomas Fire in Ventura County, Calif.—Palacios found herself reevaluating her career trajectory. The experience brought home to her the realization that she wanted to put her skills toward “giving to a community that I truly believe in and making a world that matters to me and to my daughter better. In that moment, I thought, I really want to work for a Native community. I want to give back.”

Not long after, she learned of the opening for the NAP director at Dartmouth. “I submitted my resume, cover letter, and application that same day,” she says.

Palacios will mentor students and serve as an adviser to Native American student organizations on campus. Her responsibilities include developing co-curricular programs, facilitating interactions between faculty and students, advising the Native American House living learning community, and celebrating the Native community at Dartmouth through events from first year orientation through commencement—including the student-led powwow that annually draws about 1,000 participants and spectators to the Green. In addition, she will collaborate with partners throughout campus to promote initiatives in support of Dartmouth’s commitment to culture competence and inclusion.

But her first job, she says, will be to listen. “Going in, I want to spend quite a bit of time talking with the community to get a sense of what the community needs and wants. I want Native students to feel like this is their home away from home—that this is their family, that they can thrive, and that they don’t ever have to choose between their cultural identity and pursuing an academic experience.”

Liz Agosto ’01, the senior associate dean of student affairs, chaired the NAP director search committee. In a message announcing the hire, she said, “Sarah joins us as a student-centered colleague with a deep commitment to the wellness and academic achievement of Native students, a passion for collaboration, respect for diverse points of view, and a strong desire to work as part of our community.”