What is Causing More Extreme Precipitation in the Northeast?

Hurricanes and Tropical Storms Are the Primary Cause

July 31, 2018 – From Maine to West Virginia, the Northeast has seen a larger increase in extreme precipitation than anywhere else in the U.S. Prior research found that these heavy rain and snow events, defined as a day with about two inches of precipitation or more, have been 53 percent higher in the Northeast since 1996. A Dartmouth study finds that hurricanes and tropical storms are the primary cause of this increase, followed by thunderstorms along fronts and extratropical cyclones like Nor’easters. The findings are published in the Journal of Geophysical Research.

“Our study provides insight into what types of extreme storms are changing and why. We found that hurricanes were responsible for nearly half of the increase in extreme rainfall across the Northeast. A warmer Atlantic Ocean and more water vapor in the atmosphere are fueling these storms, causing them to drop more rain over the Northeast,” explains Jonathan M. Winter, an assistant professor of geography at Dartmouth and co-author of the study. “Other research has demonstrated that these two conditions have been enhanced in our warmer world,” added Huanping Huang, a graduate student in earth sciences at Dartmouth and the study’s lead author.

The findings demonstrate that 88 percent of the extreme precipitation increase after 1996 was caused by large storms in Feb., March, June, July, Sept. and Oct. 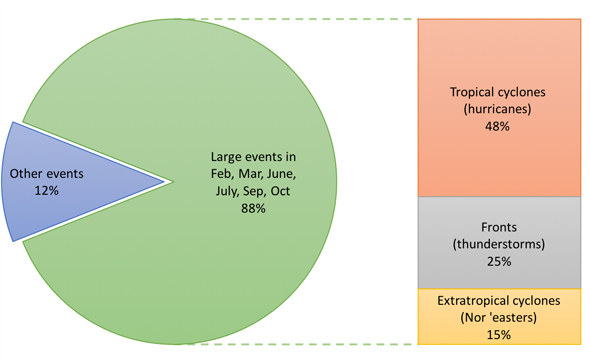 Overview of the causal mechanisms of the increase in extreme precipitation in the Northeast since 1996.
Graphic provided by Huanping Huang, Jonathan Winter, and Erich Osterberg.

These results build on the team’s earlier research by examining what caused the increase in heavier or extreme precipitation beginning in 1996. The researchers analyzed precipitation data from 1979 to 2016 across the Northeast— Maine, New Hampshire, Vermont, Mass., Conn., R.I., N.J., N.Y., Pa., Md., DC, Del., and W.Va. in conjunction with data pertaining to daily weather maps and oceanic and atmospheric fields.

Winter is available for comment at: Jonathan.M.Winter@dartmouth.edu. Huanping Huang and Erich C. Osterberg in earth sciences at Dartmouth also served as co-authors of the study.