Bones From Inuit Gravesites Are Returned in Repatriation Ceremony

The College returned the contents of gravesites excavated by a Dartmouth anthropologist in 1967. 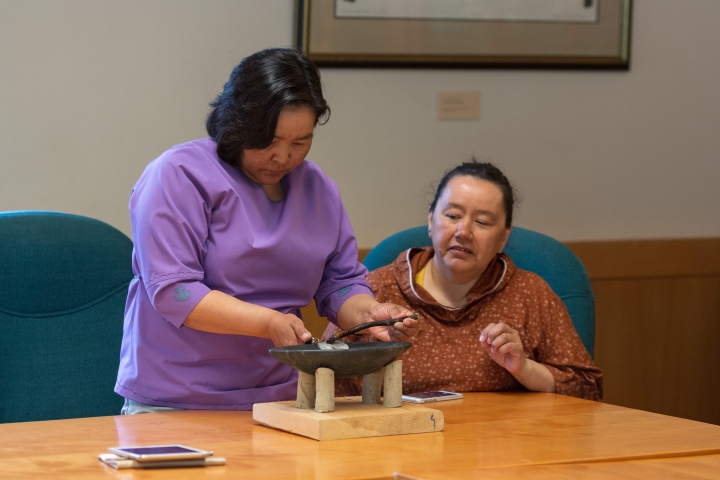 Rhoda Kokiapik, the executive director of the Avataq Cultural Institute (left), and Nancy Palliser, coordinator of the Avataq Local Cultural Committees, light a “qulliq,” a traditional lantern, as part of a ceremony accepting Dartmouth’s return of Inuit remains. (Photo by Rob Strong ’04)
8/29/2018
Body

A delegation from the Avataq Cultural Institute, the Inuit cultural organization of Nunavik, Northern Quebec, arrived on campus this summer for a solemn task: to take possession of human remains excavated from Inuit gravesites more than 50 years ago by Professor Elmer Harp, who died in 2009.

“Everyday life within the Avataq Cultural Institute is full of interesting things,” says Rhoda Kokiapik, the institute’s executive director. “One such moment was when we found out that human remains were kept at the Dartmouth College in Amiajikani—a term used by Inuit when they say, ‘in the States.’ We traveled to Hanover to honorably receive these centuries-old human bones on behalf of Inuit of Northern Quebec, also known as Nunavik.”

Deborah Nichols, an anthropologist and the William J. Bryant Professor, who helped organize the repatriation ceremony, says the remains came to Hanover in 1967, when Harp—then chair of the anthropology department, which he co-founded—led a National Science Foundation-funded survey of the eastern shore of Hudson Bay.

There, in a place he called “Desolation Cove,” Harp and his team excavated two gravesites—estimated to be between 200 and 400 years old—and brought what they found back to Dartmouth.

“The practice of archaeology is much different today than it was in 1967,” Nichols says. Such an excavation, she says, would not be done today. For one thing, in the United States, the 1990 Native American Graves Protection and Repatriation Act (NAGPRA) now protects Native cultural objects and remains and sets rules for their return to tribal communities. Dartmouth’s anthropology department, in conjunction with the Hood Museum of Art, has long since inventoried its collections to comply with NAGPRA, and follows a strict professional code of ethics in the handling of indigenous artifacts and remains.

But Harp’s collections were no longer at Dartmouth when these inventories were done, Nichols says. Harp retired in 1978, and at the time, the College did not seek to keep his research collections. So his collection, including the bones from Desolation Cove, went home with him, where they stayed for the rest of his life.

“After his death, his son, Doug Harp, called me up and said he had some collections and materials of his father’s that should come to the department,” Nichols says. The department received the materials in 2014.

“We had no desire to hold on to them—it wasn’t ethically appropriate for us,” Nichols says. “I thought they should be returned to Canada.”

The effort to do so took four years. Repatriations are by nature long and difficult, as other institutions of higher learning—including, in recent years, Princeton, Harvard, and Yale—have found. In a particularly high-profile repatriation process in 2011, Yale returned artifacts taken a century ago by famed explorer Hiram Bingham from Machu Picchu, an Inca site in the Andes Mountain. 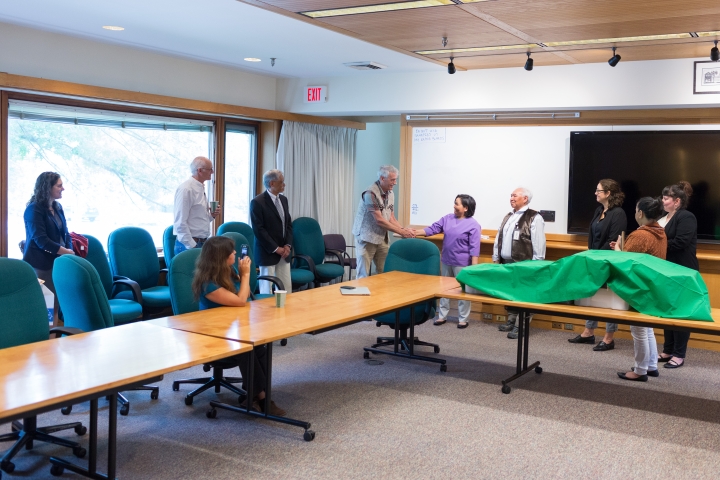 William Fitzhugh ’64, curator of archaeology and director of the Arctic Studies Center at the Smithsonian’s National Museum of Natural History, shakes hands with Rhoda Kokiapik, executive director of the Avataq Cultural Institute, while Avataq President Josepi Padlayat and others from Dartmouth and the Avataq Institute look on. (Photo by Rob Strong ’04)

When Nichols realized the materials included bones from Inuit gravesites, she began the process to return them. But the process was complicated by the fact that Canada does not have an equivalent of the regulatory structure of NAGPRA. Nichols, with the help of Dartmouth’s Office of the General Counsel, had to figure out both how to legally return the remains, and, importantly, whom to return them to.

For the latter problem, Nichols enlisted the help of a former student of Harp’s. William Fitzhugh ’64 is the curator of archaeology and director of the Arctic Studies Center at the Smithsonian’s National Museum of Natural History and one of the world’s leading archaeologists of the Arctic. Fitzhugh was a graduate student at Harvard when he accompanied Harp on the 1967 Hudson Bay expedition. And he happened to be teaching as a visiting professor at Dartmouth in the winter of 2015.

“Bill was involved in the excavations, so he knew exactly where they were from. And he has worked in Canada for much of his career, so he knew who to contact to identify the appropriate organization to repatriate the remains to,” Nichols says. The Ministry of Canadian Heritage determined that the Avataq Cultural Institute was the organization best positioned to find the right local Inuit community to receive the remains, and Nichols and Fitzhugh began a correspondence with the institute to arrange a time and place for the formal return. They finally were able to schedule the meeting in June.

In preparation for the meeting, forensic anthropologist Bruno Frohlich, a visiting professor, worked with two students—Holly Patterson ’19 and Jack Mourouzis ’18—over the past spring term to analyze the remains and write a report detailing what the collection contained. Although there were no complete skeletons, they were able to determine that the bones belonged to “at least six individuals, but most likely representing a much higher number of individuals,” according to the paper. They identified six individuals: two adult women, two adult men, an infant, and a child under the age of 6. 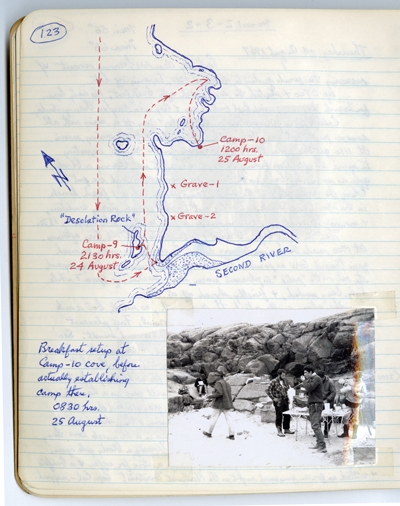 During their stay, representatives from the Avataq Institute visited Dartmouth Library’s Rauner Special Collections Library, where they saw selections from Professor Elmer Harp’s papers, including this hand-drawn map of the gravesites where Harp found Inuit remains in 1967. (Photo courtesy of Dartmouth Library)

The eight-person delegation from the institute arrived in Hanover in June, and shared a meal with a group from the anthropology department, Native American studies, and the Hood, as well as Fitzhugh, Doug Harp, and a representative from the Canadian Consulate in Boston.

N. Bruce Duthu, the Samson Occom Professor of Native American Studies, opened the gathering with an acknowledgement that Dartmouth is in the ancestral homeland of the Abenaki people. “Bruce also offered them the gift of an Abenaki basket, and we introduced ourselves and just ate and talked for the next couple of hours,” Nichols says.

The repatriation ceremony was held the following day. “I acknowledged at the outset that I had never done this before,” Nichols says. “Their president acknowledged they’d never done it before, either.”

Assistant Professor of History and Native American Studies Maurice Crandall, who is a citizen of the Yavapai-Apache Nation of Camp Verde, Arizona, offered a greeting and a prayer in Yavapai. Then people had an opportunity to speak.

“Bill Fitzhugh talked about the nature of the research they were doing during the 1967 survey, and the circumstances under which they found the burial sites and decided to excavate them,” Nichols says. “Bill’s remarks openly acknowledged inappropriate past examples of burials excavated in the Arctic by Smithsonian scholars that have been repatriated, and he offered his personal apology. The field has changed considerably since 1967, and he spoke thoughtfully about this.”

Josepi Padlayat, the institute’s president, spoke about learning of the remains, and about “the relationships they were establishing during this visit with Dartmouth,” Nichols says. For example, the delegation had an opportunity to meet with curators from the Hood, which has a large collection of objects from Nunavit; to visit Dartmouth Library’s Rauner Special Collections Library, home to extensive Arctic collections, including Harp’s papers and records of his research in the Hudson Bay region; and to meet faculty in anthropology and Native American studies.

Nichols says she thinks the repatriation may have a secondary positive outcome. “Dartmouth reestablished connections with a community we haven’t connected with since Elmer worked up in the region,” she says.

As part of the repatriation ceremony, the visitors from the institute lit a traditional Inuit soapstone lantern known as a qulliq, and representatives of the College and the institute signed official documents drawn up by the general counsel’s office. The remains were formally transferred to the Avataq representatives in sealed boxes, the bones carefully wrapped in acid-free tissue paper.

“The College counsel’s office was absolutely fabulous. They made contact with the Canadian consulate’s office in Boston and provided guidance about what needed to be in the paperwork,” Nichols says. Following the consulate’s advice, Nichols photographed the contents of the boxes so they wouldn’t need to be opened at the border. A representative from the Canadian consulate called the border customs officials ahead of time to ensure the party would have no difficulty crossing.

Now back at the Avataq Cultural Institute, the bones have one last stage in their journey, Kokiapik says. “We plan to return these remains this summer to their rightful resting place.”