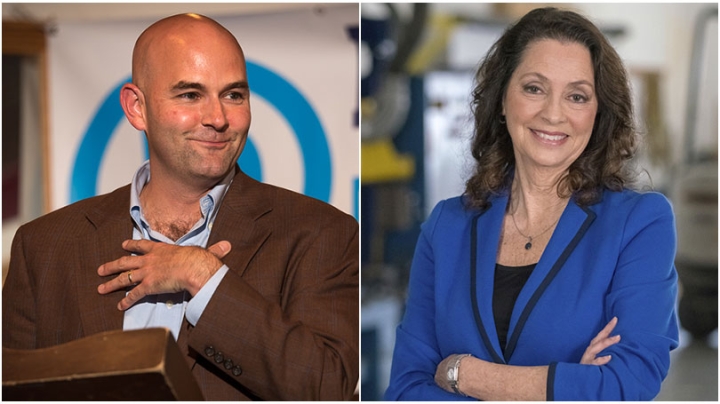 New Hampshire Democratic gubernatorial candidates Molly Kelly and Steve Marchand will talk about their priorities at Dartmouth next week, ahead of the Sept. 11 primary.

The event, hosted by the Nelson A. Rockefeller Center for Public Policy and moderated by senior lecturer Charles Wheelan ’88, will allow both candidates to talk about their policy positions and respond to questions from the audience. The forum is set for 5-6 p.m. Monday, Aug. 13, in Alumni Hall at the Hopkins Center for the Arts.

Kelly, who has served as a state senator from Keene and surrounding towns in Cheshire County, and Marchand, a former mayor of Portsmouth, are competing in the Democratic primary that will decide which candidate will go on to challenge Republican Gov. Chris Sununu in November. This will be the first bid for reelection as governor for Sununu, who was elected in 2016. (Sununu is an ex-officio member of the Dartmouth Board of Trustees, which reserves a seat for the New Hampshire governor.)

Wheelan will pose questions to the candidates and facilitate the question-and-answer period with the audience at the forum. The event is being held for the benefit of students and is free and open to the public.

In addition, Wheelan will invite the students from his summer class, “The Economics of Public Policymaking,” to attend. He advises his students at all candidate forums and debates to “listen to how candidates speak about tradeoffs,” he says.

In addition to the Rockefeller Center, the forum has support from Conferences and Events, the Hopkins Center, Safety and Security, and the Office of Student Life.

The College provides equal opportunities for all candidates and parties; the College cannot directly support or endorse a candidate or party; and no political fundraising is allowed to take place at events hosted by the College.