Anne Hudak has more than a decade of experience in athletics and student affairs. 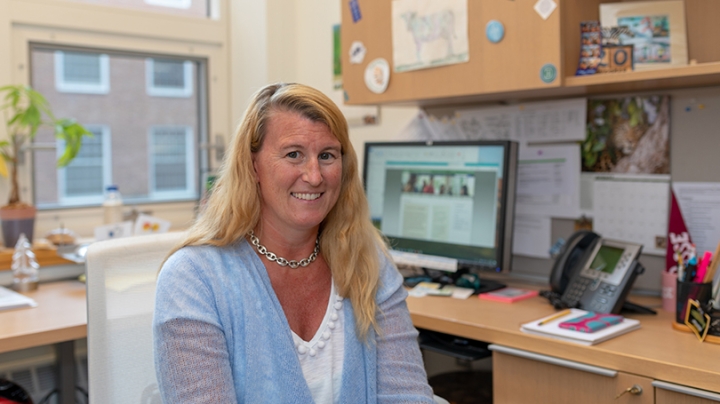 Assistant Dean Anne Hudak, who has worked with Dartmouth students in academic affairs and athletics for more than a decade, has been named assistant dean for undergraduate veterans.

In this newly created position, Hudak will support all enrolled and transfer student veterans, including the current cohort of 36 undergraduates. She will also work with admissions on veterans’ recruitment. Hudak starts her new job on Sept. 1.

“We are excited to have such an experienced professional serve in this capacity,” says Dean of Undergraduate Students Brian Reed.

Hudak says her work with undergraduate veterans, like her work in Peak Performance and in the undergraduate dean’s office, will focus on support in students’ academic, social, and community life at Dartmouth. She has already reached out to the veterans on campus in a letter announcing the new assistant dean position.

“When I was introducing myself in this new position, I let our undergraduate veterans know that I think of every student as having a puzzle. Every student has different pieces that they need to fit into that puzzle in different ways. I am excited to help our vets fit the pieces together,” Hudak says. “The challenges can be very different for 18-year-old first years and our vets who are bringing a wealth of experience and different perspectives.”

Dartmouth has long welcomed and supported student veterans, which was made a priority under the leadership of then-President James Wright. Since becoming a president emeritus, Wright has continued working to encourage veterans to attend college and has helped recruit veterans to come to Dartmouth. The College has also participated in the Posse Veterans Program.

Naming a dean to work with veterans continues the evolution of Dartmouth’s work to support veterans, Wright says.

“Dartmouth has a proud record of recruiting and enrolling veterans,” says Wright. “The administration has affirmed its commitment to extend that record through the appointment of Anne Hudak. She is an excellent choice to work with admissions to help recruit veterans and to provide support for our enrolled veteran students. This community is the better due to their presence.”

Director of Admissions Paul Sunde says he looks forward to working with Hudak to recruit and support veterans.

“With her years of experience supporting undergraduate students and her familiarity with the needs of our veteran students, Anne is well positioned to serve as Dartmouth’s inaugural assistant dean for veterans,” Sunde says.