Laura Ray to Be Interim Dean of Thayer

The search will begin soon for a dean of the engineering school. 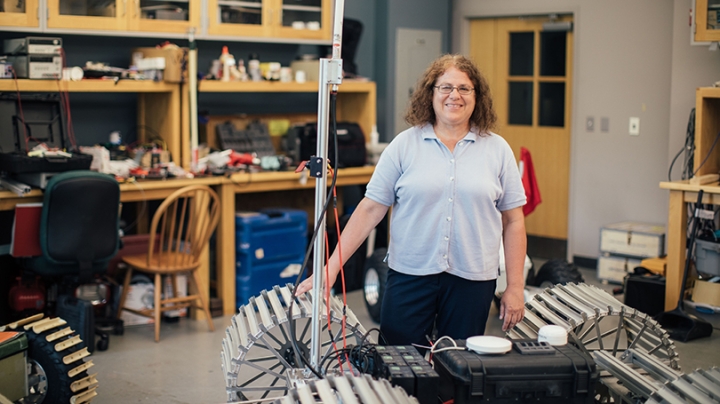 Laura Ray, whose research includes developing robots to support science in polar regions, will take over as interim dean at Thayer School of Engineering in late October. (Photo by Robert Gill)
8/12/2018
Body

Laura Ray, a professor of engineering whose NASA- and National Science Foundation-funded research includes developing robots to support science in polar regions, will serve as interim dean of Thayer School of Engineering while an international search is conducted for the next dean.

“Professor Ray is one of Thayer’s most experienced senior faculty members, a talented scholar, teacher, and entrepreneur. I am confident that the engineering school will be in great hands under her leadership this coming year,” says Joseph Helble, Thayer’s dean of 13 years, who will begin his new role as Dartmouth’s provost at the end of October.

Ray, who has been at Thayer for 22 years, developed the proposal for the first position hired in Dartmouth’s academic cluster initiative, the Thomas E. Kurtz Chair in the William H. Neukom Academic Cluster in Computational Science. She also chaired the search committee that in 2015 hired scientist Rahul Sarpeshkar to hold the Kurtz chair.

A senior fellow in Dartmouth’s Society of Fellows, Ray will begin as interim dean on Oct. 29 and serve through June 30, 2019, or until a new dean is in place.

“I’m very excited about the appointment,” says Ray. “My role as interim dean will be to keep the momentum going at Thayer and make sure that the next dean can hit the ground running.”

A search advisory committee, to be chaired by Thayer’s Eric Fossum, the John H. Krehbiel Sr. Professor for Emerging Technologies, has been appointed. Fossum is also associate provost for entrepreneurship and technology transfer and director of Thayer’s PhD Innovation Program.

“Joe Helble has brought national prominence to Thayer, and we intend to appoint a successor who will continue to innovate and strengthen the engineering school,” says Interim Provost David Kotz. “We look forward to assembling a talented pool of candidates for this key position.”

Helble helped make Thayer a national leader in educating women in engineering, created the first engineering PhD innovation program in the country, and during his tenure enrollment at the school has nearly doubled.

The next Thayer dean will play an important role in shepherding expansion on the west end of campus, where the engineering school is located. The $200 million project will integrate engineering, computer science, and the new Magnuson Family Center for Entrepreneurship in a facility that will be linked to the MacLean Engineering Sciences Center and Cummings Hall. The project timeline has construction beginning early in 2019, pending town approval of permits.

“The provost has assembled an excellent search committee and we are committed to gathering top-notch teacher-scholar-leader candidates in the best tradition of Thayer School’s 150-plus years of history. We seek those candidates, who, with their passion and new ideas, will amplify the substantial groundwork that has been laid for the west end expansion for engineering, computer science, energy, business, and entrepreneurial thinking,” says Fossum.

Working with Fossum on the search committee will be Margie Ackerman, an associate professor of engineering; Duane Compton, dean of the Geisel School of Medicine; Christine Cook, chief financial and administrative officer at Thayer; Anne Gelb, the John G. Kemeny Parents Professor (in mathematics); Ashifi Gogo, Thayer ’10, the first graduate of Thayer’s PhD Innovation Program and founder and CEO of Sproxil, Inc., a product-verification tech company; Liz Lempres ’83, Thayer ’84, a member of the Thayer Board of Advisors and the Dartmouth Board of Trustees; Lee Lynd, the Paul E. And Joan H. Queneau Distinguished Professor in Environmental Engineering Design; Terrance McGuire, Thayer ’82, chair of the Thayer Board of Advisors; Petra Bonfert-Taylor, a professor of engineering; Kristen Virkler ’18, Thayer ’19, president of Dartmouth’s chapter of the National Society of Black Engineers; and John Zhang, a professor of engineering. The search firm Isaacson Miller will assist the committee.

The committee will begin its work immediately and identify candidates over the next several months. Those interested in making nominations for the dean’s position or submitting their own name can do so by contacting Elizabeth Dorr at Isaacson Miller. The Isaacson Miller team, led by IM partner Kate Barry, will be on campus in September to hold listening sessions with the Thayer community.