Locales in this year’s series range from the barrooms of Manhattan to the top of El Capitan. 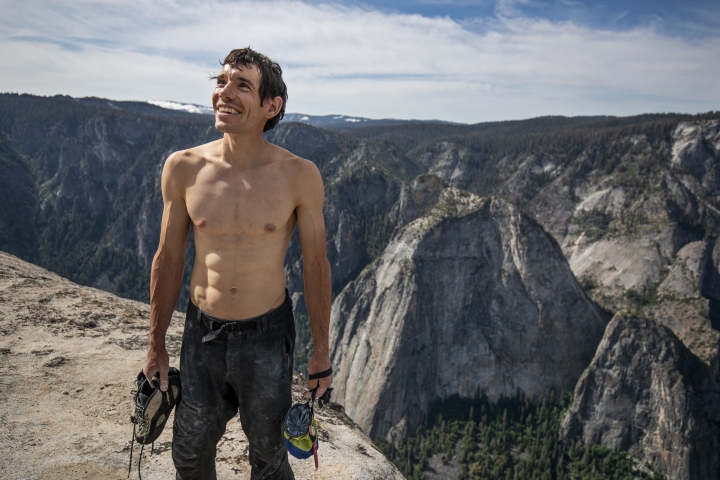 In Free Solo, Alex Honnold sets out on a multi-year journey to do the impossible: “free solo” El Capitan. (Image courtesy of the Hopkins Center for the Arts)
8/31/2018
Body

For the 33rd consecutive year, the Hopkins Center for the Arts opens its film season with films straight from the famed Telluride Film Festival. This year’s lineup has seven selections instead of the usual six.

Telluride at Dartmouth takes place Friday through Thursday, Sept. 14 through 20, at 4 and 7 p.m. in the Hop’s Spaulding Auditorium. Tickets go on sale to Hop members on Sept. 5, and to the general public on Sept. 6.

In this year’s crop, Melissa McCarthy stars as an author-turned-con-artist in a true-life comedy drama (Can You Ever Forgive Me?); Hugh Jackman stars in a dark political comedy about Sen. Gary Hart’s abortive run for the presidency (The Front Runner); Rachel Weisz and Emma Stone fight tooth, nail and each other for favor in the 1700s English court of crazy Queen Anne (The Favourite); a modern Nordic spin on the Ugly Duckling tale takes a surprisingly humanist turn (Border); a teenage boy dreams of being a (transgender) ballerina (Girl); a modern crime drama involving a dog groomer unfolds in southern Italy (Dogman); and a rock climber is followed by a documentary team as he attempts a nearly impossible feat on Yosemite’s El Capitan (Free Solo).

The Telluride Film Festival, occurring each Labor Day weekend in Colorado, is considered one of the premier arts events in the country. Each year, hundreds of cinema lovers flock to Telluride to immerse themselves in a three-day celebration of film. Telluride consistently presents a remarkable and diverse slate: the rare and unknown, restored gems, retrospectives, and the latest (and greatest) from the upcoming season. The New York Times calls Telluride “the smallest, most original, and most stimulating of the major festivals.”

Telluride at Dartmouth was born 33 years ago through a long-standing relationship between the festival and the College. Each year, six films come directly from Colorado for special advance screenings at the Hopkins Center. This is a unique opportunity for the Dartmouth community to get a sneak peek at the latest international films—often months before they’re released.

Can You Forgive Me?

Nicole Holofcener and Jeff Whitty adapt this true, small-scale story from the memoir of Lee Israel. A once-respected author falling into obscurity, Lee tries to save herself by tapping into her gift for forgery. Director Marielle Heller masterfully renders the book-lined apartments and shadowy barrooms of Manhattan’s Upper West Side and captures the ache of being alone and unglamorous in your 50s and, powerfully, the humiliation of poverty after a life of middle-class accomplishment. Melissa McCarthy, in a dramatic turn, is so unaffected, unsentimental, and precise in her depiction of Lee, in all of her self-absorption and misanthropy, that you momentarily forget she’s one of Hollywood’s most successful comedians. Of course, her exchanges with Richard E. Grant, playing an equally clever, equally desperate con man, are wildly funny. (U.S., 2018, 1 hour, 47 minutes)

With Thank You For Smoking and Up in the Air, writer-director Jason Reitman displayed a gift for weaving charged political and social themes into intelligent and entertaining comedy-dramas. His latest take is on the 1988 tabloid scandal that derailed Gary Hart’s presidential campaign. Hugh Jackman is convincing as the senator who is perhaps too interested in ideas and policies to succeed in a changing media culture. Vera Farmiga is quietly heartbreaking as his wife, and J.K. Simmons plays the campaign manager unable to persuade the candidate to turn himself into a TV commodity. As tabloid journalism and political journalism merged for the first time, Sen. Hart was forced to drop out of the race—events that had a lasting impact on American politics and the world stage. (U.S., 2018, 1 hour, 52 minutes); courtesy of Sony Worldwide

In the early 18th-century English court, Queen Anne (Olivia Colman) is chronically infirm but mercurial, and her long-time consort, Lady Sarah (Rachel Weisz)—a vindictive and shrewdly magnetic friend—manages parliamentary factions on the Queen’s behalf. Enter Abigail (Emma Stone), a young woman fallen on hard times seeking to restore her lost privileges. Director Yorgos Lanthimos (The Lobster), with superb support from the splendors of Sandy Powell’s costumes, the production design of Fiona Crombie, and the candlelit cinematography of Robbie Ryan, has fashioned a sumptuous comic melodrama that never loses its savage edge. The witty, foul-mouthed script finds a way to merge Barry Lyndon and All About Eve to exhilarating effect. Colman, Weisz, and Stone exuberantly perform their triangular dance of intrigue, desire and power, as if they were inventing the Game of Thrones. (UK/US/Ireland, 2018, 2h); courtesy of Fox Searchlight.

In the riveting first scene, Tina (Eva Melander), a troll-like customs officer, demonstrates her preternatural sense of smell: It allows her to detect guilt and rage. After catching a child-porn smuggler, she gets promoted to detective, and then this poignant fairy tale takes a wonderfully disconcerting leap. Tina encounters Vore (Eero Milonoff), who, despite similar physical irregularities, insists—with outlandish comic urgency—on their beauty. Swedish-Iranian director Ali Abbasi adapted the ingenious script from John Ajvide Lindqvist’s (Let the Right One In) novella, and he skillfully blends passionately erotic and supernatural elements with thinly veiled commentary about the status of outsiders in today’s Sweden. It’s filled with surprises, absurdity and soulful moments. But it’s Melander’s stunningly engaging performance that makes Border a mesmerizing experience. (Sweden, subtitled, 2018, 101m); courtesy of Neon.

This extraordinarily passionate and compassionate film follows Lara (the superb Victor Polster), a young transsexual teenager whose medical progress is complicated by the grueling physical challenges of training to be a ballerina. Lukas Dhont’s storytelling, with its lyrical, balletic elegance, seeks out every nuance and conflict arising from the physical and psychic challenges Lara must endure. Frank van den Eeden provides the agile, sensuous cinematography, and Polster, who was named Best Actor by the Cannes Un Certain Regard jury, and who was just 15 at the time of filming, embodies Lara’s obsessive dedication to her dreams. Polster’s commitment serves as the fuel for the film’s heartbreaking beauty and clarity. As writer and director, Dhont deservedly won Cannes’ Camera d’Or for Best First Feature. (Belgium, subtitled, 2018, 1h45m); courtesy of Netflix.

Marcello (Marcello Fonte) is an elfin, sweet-tempered dog groomer who clearly has a deep affection for man’s best friend. To afford scuba-diving trips for his daughter, he also deals a little cocaine on the side, a neat arrangement until one of his friends and customers, Simone, a former boxer, forces Marcello into assisting in robbing a neighbor. Simone (Edoardo Pesce, reminiscent of DeNiro’s Jake LaMotta) is a short-tempered, dangerously impulsive thug, and he forever disrupts the fragile equilibrium of gentle Marcello’s life. In the manner of a classic western, Marcello must ultimately take revenge. Writer-director Matteo Garrone returns to the impoverished, besieged small-town southern Italian atmosphere of Gomorrah, blending shocking violence with heart-melting tenderness. Fonte, a prison guard whom Garrone discovered in a play, won the Cannes Best Actor award, demonstrating both his loving, nurturing side, and, when his honor is tested, a capacity for brutality. (Italy, subtitled, 2018, 1 hour, 43 minutes); courtesy of Magnolia.

When they hook Alex Honnold up to an MRI, they find limited activity in the amygdala, the brain’s emotional center. He’s a man needing more than daily life to activate him. And so he climbs. Already one of the most celebrated rock climbers in history, Honnold sets out on a multi-year journey to do the impossible: “free solo” El Capitan, the legendary 3,000-foot wall in Yosemite. To free solo means climbing without ropes. To climb without ropes means that any mistake will be fatal. This vertiginous film, by Elizabeth Chai Vasarhelyi and Jimmy Chin, uses an arsenal of mountain-film tricks to capture each perilous step. As with their award-winning climbing film Meru, this is a film about much more than sport—the filmmaking team explores the calculus of risk in our lives, revealing Honnold’s inner life and the powerful arrival of love in his precarious world. (U.S., 2018, 97 minutes); courtesy of National Geographic.