Behind the Scenes at the Telluride Film Festival

Dartmouth students got to see 15 films in three days and meet directors and actors. 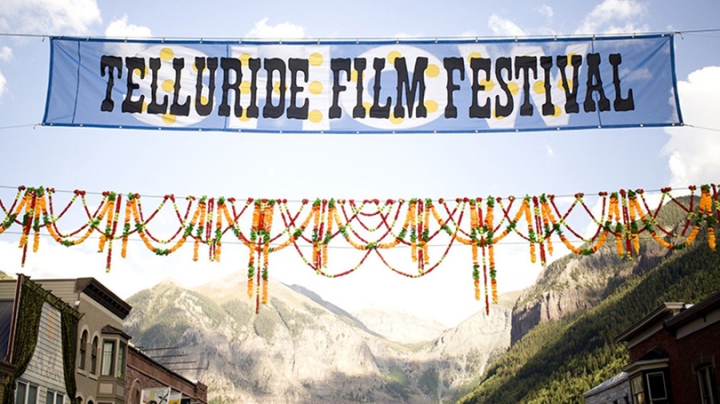 For the past week, Upper Valley audiences have been flocking to the Hopkins Center for the Arts to see films that came to Hanover straight from the acclaimed Telluride Film Festival, held on Labor Day Weekend in Colorado. But a few lucky Dartmouth film buffs didn’t have to wait for the new releases to reach campus. Esther Jeong Yun ’18, Sia Peng ’20, and Jordyn Fitch ’20 were among 50 college students chosen from around the globe to participate in the festival’s annual student symposium.

With free passes, the students watched five films a day and were invited to exclusive conversations with directors, producers, actors, and writers in what the festival website describes as “one of the most beautiful and majestic places on the planet.”

“We slept for about three hours a day, because screenings ended at 1 a.m. and there were early morning breakfast roundtables,” says Peng. “But it didn’t feel exhausting because we really enjoyed the process.”

A double major in film and computer science, with a minor in human-centered design, Peng is using a Stamps scholarship to support her research into virtual reality and film. She says her Telluride experience made her realize how much she loves movies. “I’m not sure I will be in the film industry in the future,” says Peng, “but I know that I will always be paying attention and trying to participate in films and going to festivals.”

At Telluride, Peng says, “you are either watching films or talking about films. Strangers standing behind you in a coffee line join in the conversation about a film you just saw, even though you don’t know each other.”

One film that created a lot of buzz was Girl (playing at the Hop Sept. 18 at 4 and 7 p.m.). “It’s about a girl born in a boy’s body who’s trying to become a ballerina. Some viewers thought it was problematic that the director is not transgender,” says Peng. “I thought it was a great film, though.”

Fitch agrees. Before meeting Girl’s 27-year-old director, Lukas Dhont, she wondered whether the story of a transgender woman should be told by someone who had not shared that experience. “But he explained that though he was not a trans person, he felt comfortable telling the story because he respected the struggles the main character goes through,” says Fitch. “And he made sure that there were trans voices in the production and the writing process.”

Another high point for Fitch was talking with Hirokazu Kore-eda, the director of Shoplifter, which won the Palm D’Or at the Cannes Film festival. “He was such a soft-spoken man. He would just whisper to his translator, but say the most wise and inspiring things,” Fitch says.

Both Fitch and Peng would like to return to Telluride as volunteers. They would be following in some now-famous footsteps. During a visit to the Hop last January, director Barry Jenkins (Moonlight, 2016) recalled attending the Telluride Festival as part of the student symposium. “Jenkins returned the following year as a volunteer, cleaning toilets—literally,” says Associate Professor of Film and Media Studies Jeffrey Ruoff, a film historian and filmmaker. “He continued to volunteer, working his way up the ladder until he was a programmer of short films. The climax of his Telluride ascension came when he was asked to host the Q&A of the 2013 world premiere of 12 Years a Slave, which was later awarded an Oscar for best picture.”

Ruoff says Bill Pence, Telluride’s co-founder and the Hop’s former film director, started the student symposium with early financial support from Steven Spielberg, and it “continues to feed the original cinephile spirit of the festival.”

Unlike other festivals, says Ruoff, Telluride builds suspense by keeping its film roster secret until just before opening night. “Without press conferences, red carpets, paparazzi, a market for sales agents and buyers, or a juried competition, Telluride has nevertheless consistently been able to draw growing numbers of international stars, directors, and industry professionals to a small village in Colorado,” Ruoff writes in his monograph Telluride in the Film Festival Galaxy.

Telluride at Dartmouth ends Thursday. The Telluride Pass is sold out, but single tickets may still be available on the website.