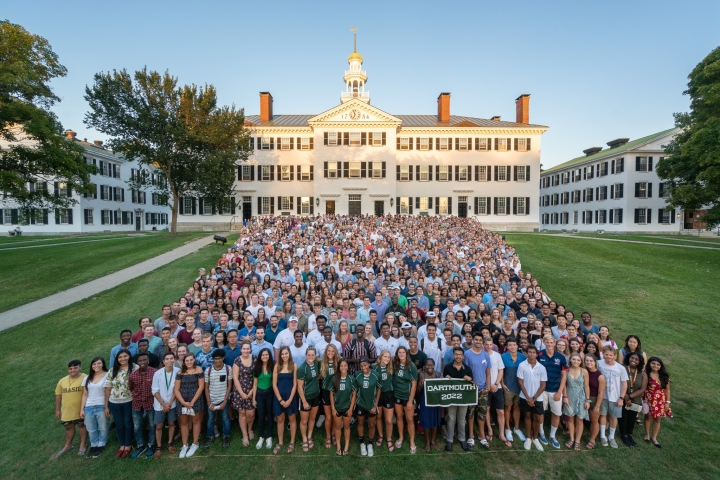 The Class of 2022 stands for its official portrait on the lawn in front of Dartmouth Hall. (Photo by Eli Burakian)
9/12/2018
Body
Image

(Graphic by Arnt Bjorkman III)
As they begin classes today, Dartmouth’s 1,169 newest students have come to Hanover from all corners of the globe. The members of the undergraduate Class of 2022 make up the most geographically diverse class to matriculate at the College, hailing from 57 countries—almost one-third of the world’s nations.

“This is a global moment for Dartmouth. Our worldwide footprint continues to expand as prospective students, and certainly our first-year students, understand that we are an institution with a global perspective,” says Lee Coffin, vice provost for enrollment and dean of admissions and financial aid.

In the last two years, Dartmouth has sharpened its message and expanded its geographical outreach, with admissions officers traveling extensively in the U.S. and overseas to represent the College in communities that are visited every year and in some locations that haven’t been visited before.

“More students than ever are attracted to our excellence and our reputation for teaching,” says Coffin. “The students who begin classes this week know that they will receive an outstanding liberal arts education from some of the world’s finest scholars.”

Coffin says the admissions staff traveled more broadly overseas, visiting 50 countries and more than 1,000 high schools in the U.S. and abroad. The outreach included emerging markets in Latin America and the Asia-Pacific region, as well as expanded travel to schools in California, Florida, and Texas.

Also in the last year, faculty members have helped tell Dartmouth’s story to high school students in events on and off campus.

“Putting a faculty member in front of prospective students is one of the best advertisements for Dartmouth there is,” says Barbara Will, the A. and R. Newbury Professor of English and associate dean for the arts and humanities. “It is a terrific way for students to experience the excitement of sitting in a class with professors who are truly passionate about their work.”

Professor Steve Swayne says he participates in open house events to provide “a perspective on what study of the humanities brings to a liberal arts education.” Students often write to tell him that he’s “opened up new horizons in their educational outlook,” says Swayne, the Jacob H. Strauss 1922 Professor of Music.

In addition to the record number of countries members of the Class of 2022 call home, students come from each of the 50 U.S. states. Another record this year is the percentage of accepted students who matriculated, known as the yield. This year’s yield as students begin the school year is 61 percent, Dartmouth’s highest ever, up from 58 percent at this time last year.