Moving them to an off-campus site is “the right thing to do,” says President Hanlon. 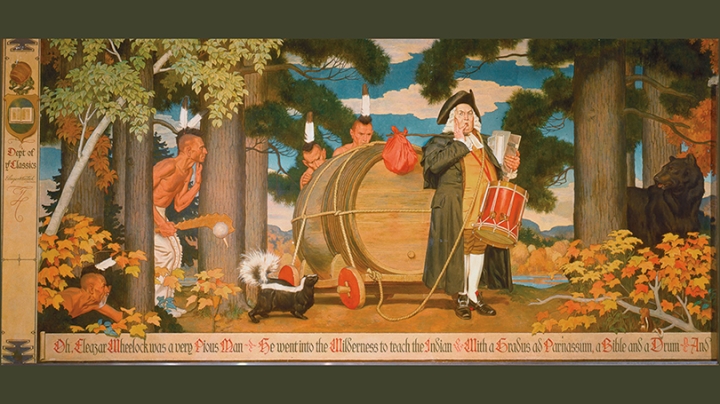 Following the recommendation of the Hovey Murals Study Group, comprising students, faculty, staff, and alumni, President Philip J. Hanlon ’77 has decided to move the murals from their present location in the basement of ’53 Commons to an off-campus Hood Museum art storage facility.

Relocation of the four painted scenes will not change access to the artwork, painted in the late 1930s on the walls of a long-closed room in the basement of the Class of 1953 Commons, Dartmouth’s main dining facility. But the relocation will move the works away from the center of campus, making a highly trafficked building more welcoming to all people and opening a closed space for future use.

“The derogatory images in the Hovey murals convey disturbing messages that are incompatible with Dartmouth’s mission and values,” President Hanlon says. “Moving them off-campus to Hood storage is the right thing to do.”

Created in 1938-39 in response to the Epic of American Civilization mural cycle painted by José Clemente Orozco in the Dartmouth Library’s reserve reading room in 1932-34, the Hovey murals consist of four painted scenes depicting Dartmouth’s founding, inspired by a drinking song written by Richard Hovey, Class of 1885. In contrast, the Orozco murals are considered one of the finest examples of mural painting in the country, and in 2013 the reading room, renamed the Orozco Room, was designated as a national historic landmark.

Interim Provost David Kotz, who convened the Hovey study group in April to inform a recommendation to President Hanlon, says the murals will remain under curatorial supervision by Hood staff and will continue to be accessible to faculty who want to use them in their teaching and research.

“The murals have been viewed as part of more than 50 courses, taught by 28 faculty members, since 2011,” says Kotz. “As an institution of higher education, we recognize the murals’ value as a teaching tool. For that reason, faculty access to the works will not change. However, we also recognize that the murals are deeply insulting to Native Americans and to many others in the Dartmouth community.”

The study group’s recommendation is “compelled by our institutional commitment to diversity and inclusion, our historic charter commitment to the education of Native American students and our dedication to preserving even offensive art works for critical examination and research,” the group said in its recommendation.

Juliette Bianco ’94, deputy director of the Hood Museum, and N. Bruce Duthu ’80, a professor of Native American studies, chaired the study group. In a joint statement, they said that they supported moving the murals.

“We are pleased with President Hanlon’s decision. In addition to their disparaging treatment of Native Americans, the murals objectify women and belittle their intellectual capacity. We believe the murals should be moved, but as an artifact of Dartmouth’s history and a work of art, however contentious and disrespectful, they should be conserved,” the co-chairs said.

The Hood’s staff will direct conservation work on the murals as needed after the move, Bianco says, adding that such work is routine following the move of art that has been in one spot for many years. The murals have been in place for about 80 years.

The Hovey murals will be moved this fall from the basement of what used to be Thayer Dining Hall. They were located there in what was a faculty dining room, called the Hovey Grill. (Thayer Dining Hall was renovated and reopened seven years ago as ’53 Commons.)

The former grill room was locked beginning in 1979, and the murals were covered with boards from the early 1980s to the 1990s. Since 2011, access to the murals has been restricted to use for teaching by faculty and museum staff.

“Native Americans have long pointed out that the caricatures in the Hovey panels reflect white fantasies and stereotypes but bear little resemblance to Native peoples past or present,” Colin Calloway, who holds the John Kimball Jr. 1943 Professorship and teaches in Native American studies, wrote in a book of essays by College faculty about the murals. The book, The Hovey Murals at Dartmouth College: Culture & Context, was published by the Hood in 2011 and is available online.

The group heard from Hood Associate Curator of Native American Art Jami Powell, who wrote that removing the murals from ’53 Commons “is not about erasure or censorship, it is about accountability” to Dartmouth’s pledge to advance diversity and inclusion as part of the institution’s 2016 Inclusive Excellence initiative. “This is a moment where the sincerity of that commitment will be tested.”