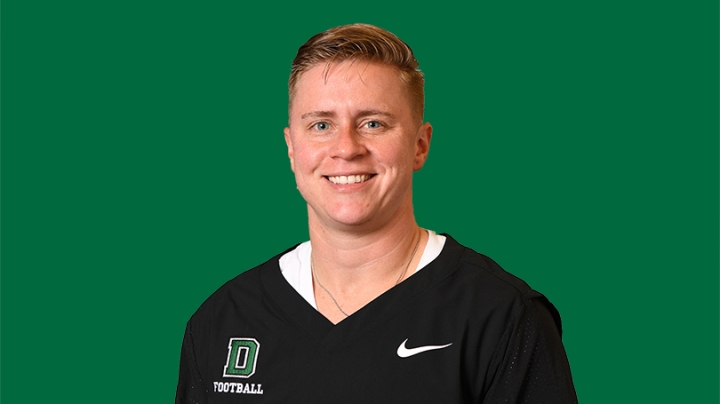 Callie Brownson has been hired as offensive quality control coach for the Big Green. (Photo by Gil Talbot)
9/12/2018
Body

Buddy Teevens ’79, the Robert L. Blackman Football Coach at Dartmouth College, today announced the hiring of Callie Brownson to be the offensive quality control coach for the Big Green. With the hiring, Brownson becomes the first known full-time female football coach at the Division I level.

“Callie is as good as anyone I’ve ever had in terms of her skill set, preparedness, attention to detail and passion,” Teevens said. “Players came up to me after a few days of preseason wondering if I would consider hiring her. She is a forward-thinking individual, very broad-minded. We had an opening, the preseason was kind of like a tryout and she excelled—on and off the field—every day.”

Brownson originally came to Teevens’ attention at the Manning Passing Academy where she served as one of 16 female coaches for the first women’s clinic held at the prestigious camp. She made such a strong impression on Teevens that he invited her, along with Chenell “Soho” Tillman-Brooks, to come to Hanover for a two-week internship during the preseason.