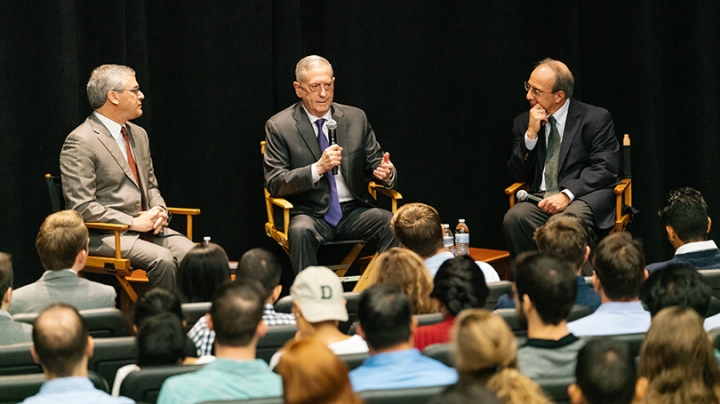 During a visit to campus on Friday, U.S. Secretary of Defense Gen. James Mattis told Dartmouth students to live up to their “irreplaceable role as citizens.”

In his third visit to the College, Mattis spoke to foreign policy students and student veterans about the U.S. military’s role in protecting the Constitution and the American people. “Dartmouth has a long, long history of service to our country,” he said, commending those from the College who served in the military from Revolutionary times to the present day, as well as leaders including John Sloan Dickey, president of Dartmouth from 1945-70, who served in the State Department during World War II. “We have to have people who are unapologetic of the values we stand for,” Mattis said.

Mattis’ lecture, hosted by the John Sloan Dickey Center for International Understanding, was delivered to the students of Professor of Government Michael Mastanduno’s “U.S. Foreign and Military Policy” class as well as more than 100 student veterans, ROTC students, and undergraduates in the Dickey Center’s War and Peace Fellows Program, led by Associate Professor of Government Ben Valentino.

In his remarks on the secretary of defense to a crowd of 200 people in the Loew Auditorium of the Black Family Visual Arts Center, Dickey Center Director Daniel Benjamin noted, “President Kennedy used to like to say, ‘If you took all the economists in the world and laid them end to end, you would not reach a conclusion.’ I think if you took all of the pundits, journalists, politicians on both sides of the aisle today and laid them end to end you might reach the conclusion that the one person who best embodies American values in public life and who represents our continued hope for the furtherance of freedom, democracy, and human rights is Secretary of Defense Jim Mattis.”

In his introduction of Secretary Mattis, President Philip J. Hanlon ’77 noted that in the fall of 2013, after stepping down as commander of Central Command under President Barack Obama, Mattis came to the College as the Class of 1950 Senior Foreign Affairs Fellow at the Dickey Center.

“On that earlier occasion, I remember him telling me how much he enjoyed engaging with Dartmouth students. I’m not surprised by that, but I am delighted he has come back for more,” said Hanlon. 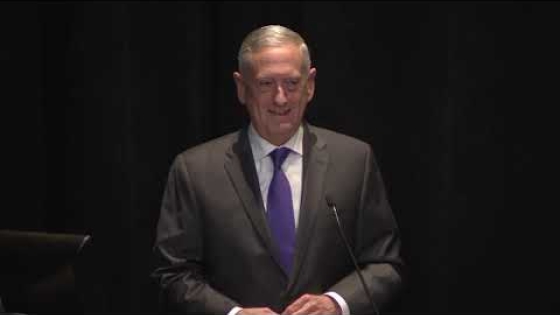 Mattis described his mission as secretary of defense as threefold. First, to restore military readiness.

“There should be no misunderstanding that democracies can fight like the dickens if they have to do so,” he said.

Second, to build and expand partnerships and alliances. “I have now visited my 60th country. It has amazed me that everywhere I go, from NATO, to Sweden and Finland, to Mexico, to India, Vietnam—I can go on and on— they want stronger relations with the United States.”

He acknowledged that the headlines may not reflect that reality. “That’s part of the political scrum that I try to keep the Department of Defense out of. We defend America. We do not take sides on the political piece of it. In fact, the young men and women who join, by and large, they look past the hot political rhetoric and they rally to the colors, and they are there because they want to be.”

In addition, Mattis said, he works very closely with the State Department because it is his fundamental belief that foreign policy must be formulated by the civilian government and supported by the military.

Lastly, Mattis spoke about reforming and modernizing the DoD. The department must spend appropriations correctly, he said, so that “it creates lethality, it links us more with our allies, it takes into account space and cyberspace.”

He also emphasized the need for accountability. “Believe it or not, the DoD—17th largest economy in the world, I’m told—has never had an audit. Well guess what, I don’t have stress, I create it. We’re doing an audit this year.” And he said he wants that practice to outlive his tenure.

During the question-and-answer period following the lecture, a student asked Mattis about the perception by some that he is the “adult in the room who often works to check the president’s worst impulses,” and whether the secretary sees his role in that way.

“The short answer is no,” Mattis said. He pointed to the top people around him as dedicated to doing what is best for the country, often sacrificing the compensation and renown they would find outside of government. Administration officials have open and frank discussion with the president, said Mattis.

Allyson Block ’19, a Dickey war and peace fellow working on issues related to public health for displaced people, said it was a remarkable opportunity to meet with the secretary of defense in a small group where he welcomed all questions.

“I came away with the sense that he is a very measured and thoughtful man who is really led by his moral character. It was really incredible to hear how the depth and breadth of knowledge that he has of history, and his dual identity as a scholar and a military man, lead him in his engagements. Really impressive.”