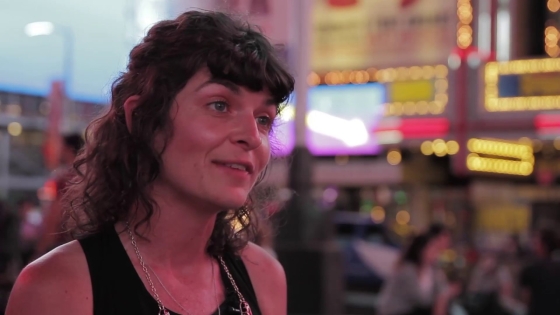 Mack transformed patterned fabrics into strobe-like light shows, “as if capturing a garden in bloom within a single moment,” writes the Museum of Arts and Design. Mack was one of nine artists featured in the Museum’s exhibition, “Surface/Depth: The Decorative After Miriam Shapiro.”

“The magic of animation often relies on delight and wonderment among audiences,” Mack says. “The opportunity to create this sense of wonderment in a public setting is thrilling to me.”

Mack says that she makes her collage-like 16mm films from recycled materials—fabrics, jewelry, construction paper—“to interrogate boundaries between art and craft.” She says she wanted the Times Square piece to bring pleasure, in troubled times, to one of the world’s most frenetic commercial crossroads.

“In our wounded world, amid major humanitarian crises, I think the artist’s role becomes increasingly unclear,” says Mack. “But, here in these midnight moments, this daily three-minute respite from commerce, we can trade advertisements for products for advertisements of pleasure. Here the work appears to the general public as an antidote to the ‘feeds’ which provide no nourishment, but instead create anxiety and alienation.”