A Conversation on Sexual Misconduct in Field Research 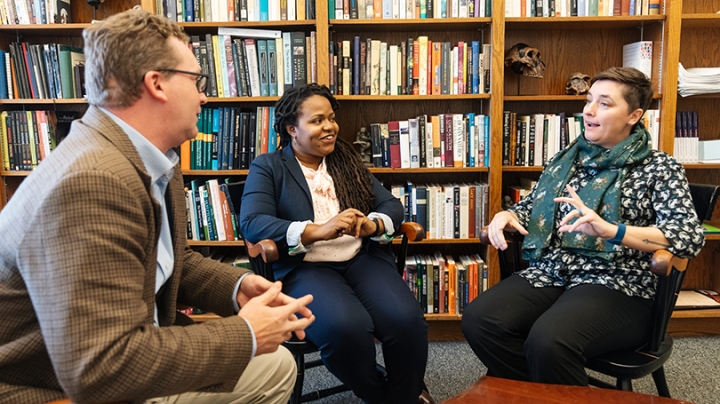 Last week the Ecology, Evolution, Ecosystems and Society (EEES) graduate program hosted two scholars whose work on the nationwide problem of sexual misconduct at anthropology and other field research sites has sparked soul-searching within the sciences about how to improve gender equity and inclusivity in the training of new scholars.

In 2014, Robin Nelson, an assistant professor of anthropology at Santa Clara University, and Katie Hinde, an associate professor in the School of Human Evolution at Arizona State University, were two co-authors of a paper that surveyed anthropologists’ and other scientists’ experiences of harassment and assault in the field. Since then, they have published a follow-up based on interviews with participants in the original study, and have consulted with academic and other institutions around the country on strategies to make field sites safer and more equitable.

Associate Professor of Anthropology Jeremy DeSilva says the work Hinde, Nelson, and their colleagues are doing on sexual misconduct is changing their discipline for the better. “The impact this has had in just four years is inspiring,” he says. “They have moved mountains. They didn’t just expose this problem; it’s led to actual solutions.”

That’s why DeSilva invited Nelson and Hinde to lead a series of workshops with graduate students, postdoctoral fellows, and faculty in EEES and other programs at the Guarini School of Graduate and Advanced Studies on setting positive norms at field sites—and having hard conversations when incidents arise.

“If you want your students to perform their best, they have to feel welcome and they have to feel safe. It’s not only the right thing to do, it’s in the best interest of science,” DeSilva says. “We’re taking steps toward making this a better and more inclusive place. And we don’t want this to be just a checking of the box—OK, we’ve done our diversity training. That doesn’t change a culture, and that’s what we need to do.”

Before the workshops began, DeSilva, Nelson, and Hinde spoke with Dartmouth News.

Why host these workshops?

Jeremy DeSilva: In academia, we’ve created a culture where not everyone feels comfortable and that their work is respected, and that reality has been exposed by the work that Dr. Nelson and Dr. Hinde have done. It was a sobering paper that’s created an important conversation in our discipline.

What inspired the original paper?

Katie Hinde: All of us knew colleagues who navigated difficult paths in their training. These stories break our hearts, but they also demonstrate a place where there isn’t equal opportunity, and people weren’t talking about it broadly. We needed it to be visible and we needed our field to be better.

What was most striking about your findings?

Robin Nelson: Two thirds of the women reported having experienced harassment in field settings. A smaller percentage experienced assault. And very few were satisfied with the resolution to their situation.

KH: Importantly, people reported that these things were happening from within their research teams. The women in the study were more likely to experience it from up the hierarchy of the research team, and men were more likely to experience it from peers. Research has shown that the long-term consequences are greater within a power differential, so this is an impediment to equal opportunity for women. Fewer than 25 percent of participants had ever encountered a sexual harassment policy at a field site. Fewer than 50 percent had encountered any code of conduct. This lets us know that important preventative dialogues were not part of community field-site management.

What’s the impact—to individuals and to academic research?

RN: We’re impoverished when we lose people, and we do lose people. There was a subset of our participants who had changed their research trajectory or left academe altogether.

KH: Recovery from traumatic experiences can take time, and at critical stages of finishing your dissertation and competing on the job market, there’s not a lot of forgiveness.

RN: We think quite a bit about the brain power we lose as we push people out. The metaphor is often a leaky pipeline, but it’s not leaky. We are literally pushing people out of the field by ignoring these larger issues.

So how do you change the culture?

RN: We have to have a conversation. We’re thinking proactively about how to set up two dynamics: the appropriate rules for participation in a research experience, and how to create an environment that allows people to come forward if your best efforts fail.

What happens in the workshops?

KH: We start out defining key concepts so we’re all on the same page. Then groups work through scenarios that reflect real-life experiences.

RN: One of our goals is to help folks get a baseline level of comfort having a hard conversation, so they can act as better allies and bystanders.

What’s been the response at Dartmouth?

JD: It’s been very positive. There’s recognition that this conversation has to happen. We’re a relatively new graduate program, and we need to have these conversations now.

RN: Not a lot of people get to this before there’s a problem. For Dartmouth to say, ‘OK, we have a growing EEES program; how do we set the stage for this to be an inclusive space?’ is very forward-thinking, and frankly, refreshing. And these grad students will inform the next grad students about the culture, so it will pay itself back.

This work on sexual misconduct is not your primary area of research, is it?

KH: I study maternal and child health, and I’m particularly interested in lactation and breastfeeding.

RN: I study parental investment and child growth in communities in the Caribbean and Caribbean migrants living in Canada. This is a side project for us, and we have grappled a lot with how much time and energy it takes to do it well.

RN: Yes. We know a lot of information about the worst situations people have ever been through. It’s a lot to carry. But we feel a tremendous amount of responsibility to our community.

Anything else to add?

RN: That’s huge. A lot of graduate students ask what they can do to protect themselves, but it is not their responsibility. It is on the senior people in the research group to set up a safe and inclusive research space. We have to demand that.

JD: I’ll add that my colleagues here are quite modest about the impact of this work. I think generations from now the scientific community is going to look back at this paper as one of the most important papers of the 21st century. This leaky pipeline of people who are being pushed out of the sciences—we’re losing them because of our behavior. This paper has exposed this problem, and you didn’t stop there, you’re coming up with solutions. It’s welcoming a whole generation of new scientists into the field that would have been lost without your work.