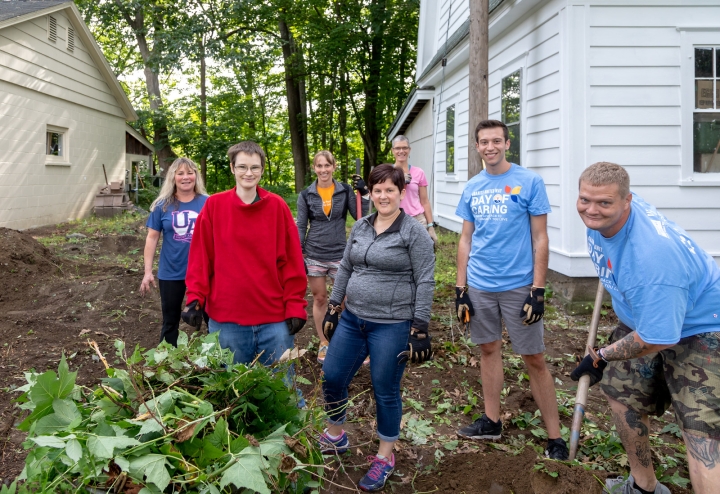 As a talent acquisition consultant in the Office of Human Resources, Roberto Martinez has a full schedule both in and out of the office. Yet it was important for him to take some time last month to join two of his office mates for a few hours at the Lebanon Opera House, prepping dressing rooms to be painted later in the day by another group of Dartmouth volunteers.

The Sept. 7 Day of Caring, a day of volunteering organized by the Granite United Way, was Martinez’s first time using Dartmouth’s volunteer time-off policy to spend part of his workday serving the community.

“People often think they have so much work to do and don’t want to leave it,” Martinez said. But he thinks volunteering is rewarding because it has an impact beyond the Dartmouth campus.

Martinez’s colleague Monique Henriques agreed. Working alongside Martinez, she applied painter’s tape to the walls as she talked about how important it is to work with colleagues in a culture where community service is highly valued.

“This is another checkbox on the list of reasons to work at an institution like Dartmouth, because I love to give back,” she said. “To have your employer stand behind that—that’s huge, because it lets you know that you’re part of a community that wants to help people.” 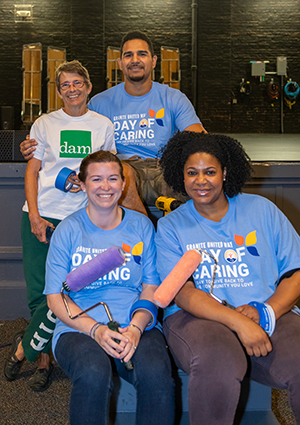 Clockwise from top left: Dartmouth’s Marion Simpson, Roberto Martinez, Monique Henriquez, and Brooke Sullivan volunteered their time at the Lebanon Opera House. (Photo by Lars Blackmore)
United Way chapters across the country have organized Day of Caring projects for the past two decades. The Granite United Way, which includes Dartmouth and Upper Valley communities, hosted six community projects on its Day of Caring, with more than 3,000 individuals volunteering across New Hampshire and Vermont—a record-breaking number of participants.

Volunteering their time is one way Dartmouth staff and faculty serve their neighbors throughout the year. Another is the campus-wide giving campaign for the Granite United Way, now in its fourth decade, which funds projects run by area nonprofits that enrich and empower the community. The 2018 campaign begins Oct. 23.

A number of College employees have a history of supporting organizations in the Upper Valley. Shelley Wirasnik, director of events and facilities at the Tuck School of Business, spent the Day of Caring morning landscaping the grounds at the Upper Valley Haven with volunteers from Tuck, the Geisel School of Medicine, and the Dartmouth Library.

Wirasnik’s volunteering is inspired by a tradition started by a friend of hers who used to celebrate her birthday by collecting donations for the Haven and organizing a group to cook a meal for residents. After her friend moved to Florida, Wirasnik kept the project going.

“It’s very rewarding,” she said. “I love giving back and I love making a difference. It means a lot.”

“We wouldn’t be able to get most of the work we do done without our volunteers,” said Kerri Weeks, a staff member at the Haven who was overseeing gardening projects on the Day of Caring. “It means a lot that everybody is thinking about other organizations in the community and the needs that are out there.”

Last year, the Dartmouth community raised more than $290,000 for the United Way, funding that was distributed to more than 48 programs and designated nonprofits serving regional needs, including the Haven, WISE, Hartford Community Restorative Justice, and Willing Hands. This year’s campaign again seeks to raise $300,000, which is critical funding for the network of social services for Dartmouth’s most vulnerable neighbors.

Rebekah Henson can be reached at Rebekah.Henson@dartmouth.edu.