In an Early Encore, Morphy May Bloom for Halloween

The colorful, smelly corpse flower is likely, once again, to draw crowds of visitors.

Amorphophallus titanum, a rare plant known to its many local fans as “Morphy,” will soon give an earlier-than-expected encore performance in Dartmouth’s greenhouse atop the Class of 1978 Life Sciences Center.

The so-called “corpse flower” last bloomed in late September of 2016 and appears ready to flower again as soon as October 30, for about three days.

Morphy could inspire an eye-catching Halloween costume. In fact, the huge pot is already decorated for the holiday, surrounded by spidery gauze crawling with plastic spiders. A fake phantom arm reaches out of the soil, holding a sign that says, “Help me.”

The plant is over 5 feet tall and is currently growing about 3 inches a day. The last time it bloomed, it topped out at nearly 8 feet. The tuber, called a corm, weighs about 80 pounds. The stalk—some see it as phallic, others compare its shape to a French baguette—is ringed with a ruffled collar, called a spathe, which, when open, will be lime green on the outside and deep red on the inside. The spathe is not, technically, the flower. The tiny flowers will be hidden in the bulging stalk. As in 2016, Greenhouse Manager Kim DeLong plans to cut a square window in the plant to give spectators a good view of the flowers.

“Last time Morphy bloomed, we had 5,000 visitors in two weeks,” says DeLong. “One family flew in from Colorado just to see it.”

DeLong says Jane Hill, an associate professor of engineering at Thayer School of Engineering, and G. Eric Schaller, a professor of biological sciences, are doing research on Morphy’s growth cycle. Grown from seed in 2003 by a horticulturist in New Hampshire and acquired by Dartmouth in 2007, Morphy first bloomed in July 2011. Flowers typically form about every seven years. DeLong isn’t sure why Dartmouth’s specimen seems to have pulled into the fast lane, but she has a theory about the growth spurt.

“It’s at maturity now,” she says, “and with such an enormous corm, it can efficiently store a lot of the energy it gets from its leaf through photosynthesis.” A recent leaf grew so tall it nearly hit the greenhouse ceiling before dying off. DeLong says Morphy, whose natural habitat would be the Sumatran rain forest, gets biweekly fertilizer in the greenhouse, heaters in the soil, lots of water, and no harmful pests, and all that tender care might further support fast-track fertility.

Morphy’s slightly morbid nickname alludes to the way it smells when it blooms—kind of like rotting flesh. There’s a good reason for the stench. Natural pollinators, flies and beetles, like it. (Spectators apparently don’t mind it, either.)

“To me,” says DeLong, “it sometimes smells like a dead rat, and other times like a dirty baby diaper. I figure the odor shifts to attract different pollinators. The last time it bloomed, when I got home, my cat wouldn’t get near me, the smell on my clothing was so strong.”

But DeLong says she won’t mind getting a little stinky as she watches the corpse flower unfold. Meanwhile, she’s  preparing her crew to welcome another bevy of admirers.

As in 2016, the greenhouse is open to the public year-round and will have special extended “Morphy” hours to showcase the flowering process. Visit the greenhouse website for the most up to date information. 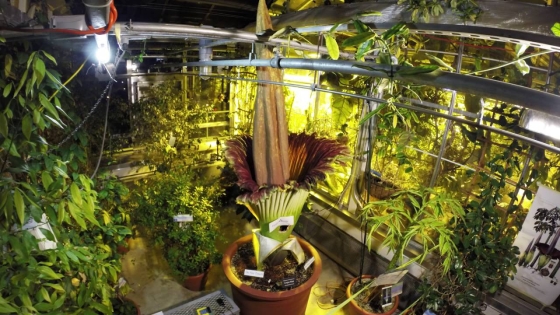 Remote video URL
In late September 2016, “Morphy,” a rare corpse flower in the Life Sciences Greenhouse at Dartmouth, bloomed. Here is a time-lapse video of the flowering.
Written by
Charlotte Albright
Share this
FacebookTwitterEmail
In the News