Experts from government, history, and sociology to discuss “what might change.” 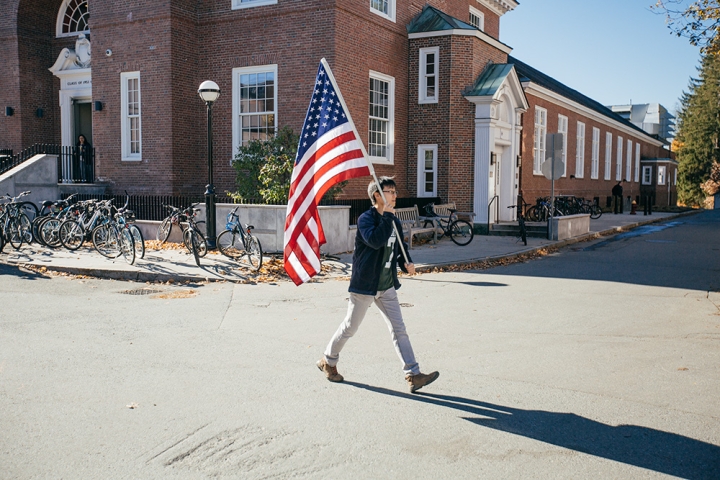 A student carries the American flag on election day in 2016. Voters across the U.S. go to the polls Nov. 6, and on Nov. 8, a panel of Dartmouth faculty will analyze the mid-term election results at a Rockefeller Center event. (Photo by Robert Gill)
10/31/2018
Body

The Nelson A. Rockefeller Center for Public Policy will host a post-midterm panel on Nov. 8 with sociology, government, and history faculty discussing what the election results could mean for the country.

Titled “2018 Mid-term Elections: What Might Change as a Result?” the event will feature Associate Professor of History Leslie Butler, the Class of 1925 Professor of Sociology John Campbell, and Professor of Government Dean Lacy. Linda Fowler, the Frank Reagan Chair of Policy Studies, Emerita, will moderate the discussion, which begins at 5 p.m. in Rockefeller Center room 003.

By the time the panelists meet on Thursday night, some of the close races across the country may still not be settled, Lacy says, “But I think we’ll be able to see whether traditional patterns like the president’s party losing seats at midterm continue to hold.”

If current polls are accurate, he says, “We’ll probably be talking about a new Democratic majority in the House but the same Republican majority in the Senate, but that’s hard to predict.”

Fowler says whether precedent and polls are borne out by voters on Nov. 6 comes down to one word: turnout.

The level of turnout by young people, independent women, Latinos, and college-educated suburban voters, will play a major role in whether the 2018 midterms cut into Republican majorities in Congress and among governorships, Lacy and Fowler agree.

The panelists plan to break down the results in key races and analyze national trends, discussing what it means for the two parties, the Trump administration, and the country, Lacy says. Campbell and Butler will add historical and cultural perspectives to the political discussion.

The event, organized as a resource for the entire Dartmouth community, is free and open to the public. The Rockefeller Center will also record the discussion to post on the center’s website.