“They have the power to make bits of history very real,” says the Dartmouth Library’s Jay Satterfield. 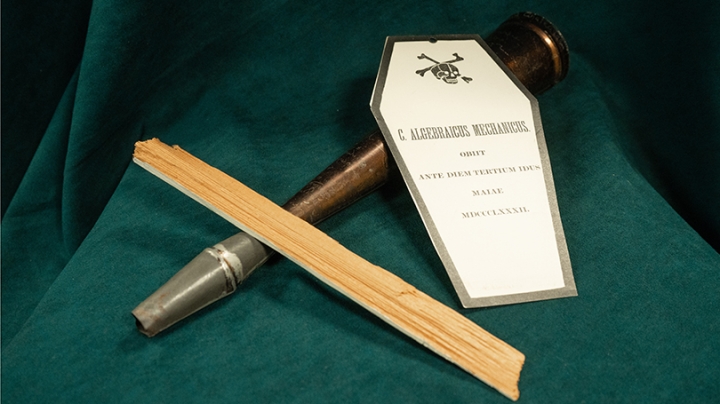 Library staffers and students have unearthed 25 tangible pieces of history—one per decade—and are creating a podcast about each artifact for an online series. (Photo by Eli Burakian ’00)
10/12/2018
Body

What better way to mark Dartmouth’s 250th anniversary than by mining for treasures in the Dartmouth Library?

Library staffers and students have unearthed 25 tangible pieces of history—one per decade—and are creating a podcast about each artifact for an online series called Hindsight Is 20/19. The audio programs are part of the College’s yearlong program of commemorative events and special projects beginning in January 2019.

The podcasters are digging for the stories behind the artifacts to learn what each one has to say about Dartmouth’s long history. “We’re going to talk about things that are amusing and serendipitous, and we’re also taking on some hard-to-discuss issues,” says College Archivist Peter Carini. “Context is key. Something that looks completely meaningless can acquire vast amounts of meaning once you know the context of it.”

A Broken Goalpost, a ‘Math Burial’

Some items that initially seem nondescript turn out to be cherished relics. The prop for one of Satterfield’s podcasts is a splintered, weather-beaten piece of wood, seven inches long, half-an-inch wide, and a quarter-inch thick, with cream-colored paint on one side. “If you found it by your woodstove, you’d think it was a great piece of kindling,” he says.

Yet the shard is at least 80 years old, and since 2009 has been swathed in linen and stored in a custom-made clamshell box. It’s part of a goalpost from a famous Dartmouth-Yale 1935 football game. Satterfield also found a vintage article in the College newspaper, The Dartmouth, reporting that Dartmouth’s 14-6 win broke a 50-year losing streak to its Connecticut rival, and a letter inviting the victors to the 1938 Rose Bowl.

“But get this,” says Satterfield. “Dartmouth turned it down.”

The Rose Bowl would require preparation during the last weeks of classes, he says, “and Dartmouth President Ernest Hopkins felt that a trek across the continent by train right after Christmas break would hurt the young men’s studies.” Nevertheless, Satterfield concludes in his podcast, from that game forward, Dartmouth was known as an Ivy league institution where rigorous academics and athletics coexist.

Among the most intriguing centerpieces for a podcast is a printed program—in the shape of a coffin—for a “math burial.”

“From the mid- to late-19th century, students had to take mathematics their first two years, and after they finished those courses, they’d have a huge party and bury their math books,” Satterfield explains. When college officials banned such interments, math-averse students built a bonfire and burned the texts.

College pranksters also sounded off, long ago, with an early morning ritual called “the horning of the faculty.”

“Hundreds of students tooted horns outside the houses of their least favorite teachers—maybe they graded hard, or gave a lot of work, or were strict disciplinarians,” Satterfield says. One of those tin antiques has been preserved and will herald another podcast.

The researchers are also combing through documents that mark turning points in College history, one of which was the ruling in a U.S. Supreme Court case, Dartmouth College v. Woodward, which allowed the College to remain a private institution rather than become a state university. The ruling has great legal significance, finding that the U.S. Constitution’s contract clause prohibits states from impairing a contract—in this case the College’s charter.

Podcaster Laura Barrett, director of education and outreach at Dartmouth Library, says the Dartmouth Case, as it is known, still shapes the College’s identity today as a close-knit academic community. But it used to be much smaller. A focal point of her research is the October 1817 College catalog, a broadside that lists 99 students, five professors, one lecturer, two tutors, and two resident graduates— a total of 109 people.

Artifacts such as those held in the Library’s Special Collections and Archives, says Satterfield, “have the power to make bits of history very real.” The podcasts will be distributed on the Library website through 2019, beginning in January, and through external podcast sites, including iTunes.