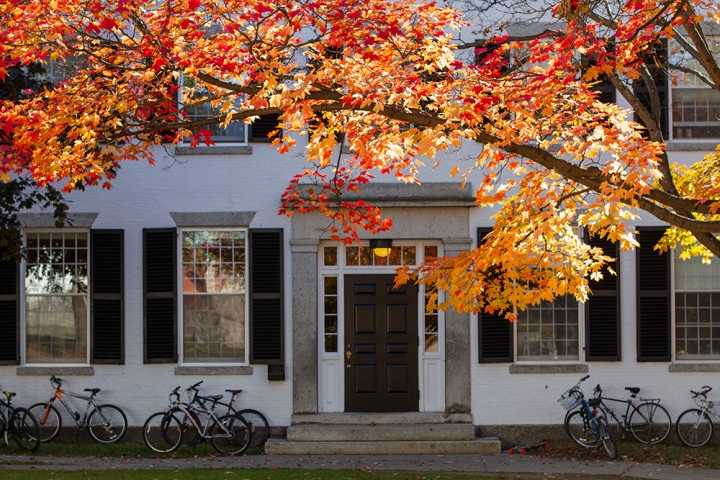 The Dartmouth LGBTQIA+Alum Association (DGALA) is partnering with Dartmouth Library to mark the College’s sestercentennial with an oral history project called SpeakOut.

A team of students guided by Caitlin Birch, the digital collections and oral history archivist at the library’s Rauner Special Collections Library, have been interviewing DGALA members and other alumni about their College experiences.

The project is part of the College’s 250th celebration, which begins in January 2019. The goal, says Birch, is to record and preserve the history of Dartmouth’s LGBTQIA+ community. “We’re seeking a complex history built from many perspectives, and the project is open to all members of the Dartmouth community—anyone who’s studied and/or worked here, queer and not,” says Birch.

“The 250th anniversary gives us an opportunity not only to celebrate the history of Dartmouth, but also to make the narrative of this history richer, more vibrant, and more diverse by adding oral histories such as the SpeakOut project,” says Susanne Mehrer, Dartmouth’s dean of libraries.

Birch says the idea for SpeakOut came from LGBTQIA+ Alum president Brendan Connell, Jr. ’87. “Some of their older members are passing away, and he realized how much history was passing with them that hadn’t been captured in any form.”

Connell, who majored in history at Dartmouth, is the chief operating officer at the Academy Museum of Motion Pictures, scheduled to open in Los Angeles in 2019. He is also a member of the executive committee of Dartmouth’s alumni association.

“I was not out as a gay student at Dartmouth,” Connell says. He recalls the 1980s, at the height of the AIDS crisis, as a time when many gay men and women felt the sting of stigma, not only in college, but in their own homes and hometowns. “But there were some brave members of Dartmouth’s community that I very much admired for their openness and willingness to fight that fight,” says Connell.

After graduation, Connell moved to Cape Cod and became a social worker. “That’s when I came out,” he says. “Later, at NYU Law School, I became more aware of movements for LGBTQIA+ rights, and came into my own as a gay man. When I started getting involved in DGALA in the late 1990s, I wanted to do my part, if belatedly, to make life better for community members in Hanover.”

Since he was a student, Connell says the College has made progress in creating a rich academic and social life for the LGBTQIA+ community. “There’s a survey  that ranks the top 30 LGBTQIA+-friendly colleges in the U.S., and Dartmouth made that list,” he says. “I’m really proud of that, not just for my part but for everyone at the College that’s been working hard to reach that goal over the years. Of course, there’s always more work to be done.”

“I first became involved with SpeakOut my freshman year,” says Mac Neill. “DGALA had a pizza dinner for any queer students interested in talking with them. I was excited because I had just taken an amazing class called ‘The History of Sexuality,’ and I wanted to do more research about that at Dartmouth.”

Some of that research, he says, shows that LGBTQIA+ students once felt unwelcome at Dartmouth. “There was a dark time in the 1980s when gay students were outed against their wishes, and ostracized.”

But Mac Neill says the College social climate has changed with the times, and homophobia, for the most part, is a thing of the past. “When I first got here I felt a little at sea,” he says, “but I can say now that I have found my place.”

In fact, Mac Neill has become a leader in the LGBTQIA+ community on campus. “I’ve helped start a group that had been dormant, called Dartmouth Spectra. We hold events open to all students to encourage solidarity in the queer community at Dartmouth.”

Mac Neill spent time conducting research in the archives at Rauner to learn about Dartmouth history and prepare for SpeakOut interviews. “I am learning that you have to come to each interview with an open mind, because being in college is different for everyone,” he says. “As much as we try to pick out common trends and build the history of our community, we are also finding that people diverge in many directions from the larger narrative, and lead their own interesting, individual lives.”

Jay Satterfield, Rauner’s head of special collections, says the audio interviews will be important additions to the library’s resources. “Within all archives,” he says, “there are things that are not well documented, either because nobody cares about them, or documents have been destroyed, or because of oppression. We call those archival silences. Then history changes, and opportunities come along to record that information.”

Dean of Libraries Mehrer says, “We are finding a variety of ways to add to the story of Dartmouth, especially in this anniversary year, and to share previously untold stories in engaging formats.”

When complete, the recordings and transcripts will be available online through Dartmouth Library. Birch says volunteers are still invited to participate in SpeakOut.