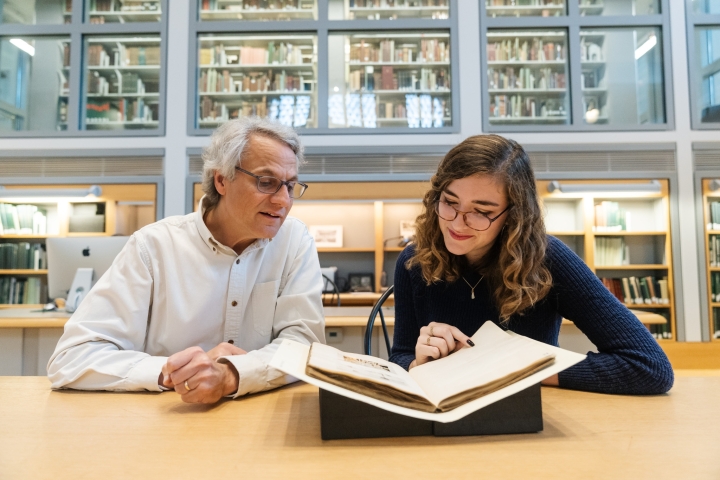 One hundred sixteen women on Dartmouth’s Faculty of Arts and Sciences hold tenure, according to 2017 data. That’s 115 more than there were in 1964, when Hannah Croasdale, an associate professor of biology and an authority on freshwater and marine algae, became the first tenured female faculty member in College history—more than three decades after being hired.

Dartmouth has honored the botanist with the Hannah Croasdale Award, given annually for academic excellence to a graduating PhD recipient who best exemplifies the qualities of a scholar. But Caroline Cook ’21 wants to shine a bigger and brighter spotlight on the trailblazing scientist.

This summer, as Dartmouth’s first historical accountability research fellow, Cook wrote a research paper and made a video about Croasdale’s life and work, drawing on materials she found in the Dartmouth Library.

“I’m on a crusade,” Cook says. “I’m telling everyone her story, and also the stories of other women who have gotten us to this point at Dartmouth.”

Cook holds the inaugural fellowship in the new Historical Accountability Student Research Program which, funded through the Provost’s office, offers four term-long, full-time research fellowships for students who want to explore the Rauner Special Collections Library’s holdings and create original content based on primary sources. It’s part of Dartmouth’s Inclusive Excellence initiative, which is aimed at fostering a culture of inclusion.

Historical accountability fellows, students who choose their own topics, will soon be joined by paid interns, whose research projects related to historically undertreated topics in Dartmouth’s history will be determined by faculty, Special Collections Education and Outreach Librarian Morgan Swan, and Institutional History Research Specialist Myranda Fuentes. Fuentes was recently hired by the library to mentor students and interns.

“As a first-generation, low-income recent graduate of Columbia University, I am excited to join this diversity initiative,” says Fuentes. “Not many schools are as willing as Dartmouth is to engage students in confronting difficult issues in their institutional histories.”

Says Swan, “Too often the narrative of an institution, culture, or place is controlled by people of privilege, and you get a monolithic, backward-facing view of a history. What we are doing here is providing varied perspectives, purposefully making history complex and difficult, and struggling with harsh realities of the past in order to prepare us to make wise decisions for the future that will benefit everyone.”

In her research, Cook learned that Croasdale patiently scaled obstacles many women scholars faced at Dartmouth and elsewhere in the first half of the 20th century. “She came here in 1935, and she was an example of administrative and systematic barriers to promotion,” Cook says. “She became world-renowned as a botanist. Yet she didn’t view herself as a pioneer. She genuinely did not understand why so many other women, including her students, looked up to her in the early 80s.”

Research Professor of Biological Sciences Celia Chen ’78  was one of those students.

“Hannah was my advisor for my senior thesis when I was an undergraduate at Dartmouth and later she became a dear friend,” says Chen. “I was so lucky to have been mentored by her. In fact, she was one of only four female professors I had in four years here.”

Croasdale shattered the glass ceiling off campus, too. She was the first female volunteer firefighter in Hanover where, with tragic irony, her own home burned down in 1989.

The year Croasdale got tenure—1964—was a turning point for female faculty at Dartmouth. That year, E. Lucile Smith, a professor of biochemistry at the medical school (now the Geisel School of Medicine), was promoted to full professor without tenure. She received tenure in 1966.

As Cook finishes her fellowship, two other students will begin historical accountability projects this winter. Samantha Koreman ’20 is set to research accessibility on campus as it relates to people with mobility issues, and Anneliese Thomas ’19 plans to investigate the experiences of black students in the 1960s and ’70s, says Fuentes.

A fourth fellowship is available, and Swan says there is still time to apply.