“I have deep feelings about this institution and want to make it better,” Kotz said. 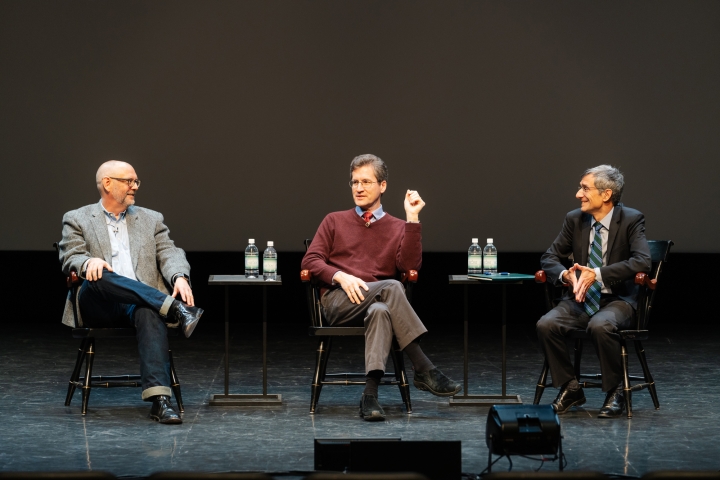 Interim Provost David Kotz was recognized at today’s town hall meeting for his leadership and service during the past year as he prepares to turn over the job to Thayer School of Engineering Dean Joseph Helble, who steps in as provost on Oct. 29.

Kotz says he knew before he began as interim provost that the job would be a challenge—as well as an opportunity to be of service to Dartmouth, a place he has loved for 36 years since his days as a member of the Class of 1986.

“I have deep feelings about this institution and want to make it better,” Kotz said. “I’m also a hiker and a camper, and I have a sense of ethics that you leave a campsite cleaner and nicer than when you arrived. So that’s the way I’m trying to leave the provost’s office for Joe, a little bit neater and cleaner than when I arrived.”

Kotz and Helble shared the Spaulding Auditorium stage at the Hopkins Center for the Arts with Executive Vice President Rick Mills at a town hall meeting on Wednesday. More than 150 members of the Dartmouth community attended the noontime meeting, billed as a conversation with the “once and future provosts.”

Helble thanked Kotz for his collaboration and friendship during Helble’s 13 years as Thayer dean, which drew a sustained round of applause from the gathering.

“I have thought of him as a colleague, friend, and collaborator previously, but he has been truly gracious and generous in giving of his time, his service to the College, and in helping me think about both the transition and the issues that will be facing me.”

Mills praised Kotz’s work. “Speaking for my team, all of us found working with Dave a true pleasure this past year. We will miss him. I’m sure working with Joe will be fabulous, but it’s been an honor and a pleasure.”

When a member of the audience asked Kotz for the top three items still on his to-do list, the interim provost said his list was too long to pick only three.

“The to-do list, which now I’m calling ‘the Joe list,’ is about 20 or 30 items long at least, and my main task for the next week or so is to get that organized in a way that I can efficiently transfer it to Joe,” Kotz said.

Written by
William Platt
Share this
FacebookTwitterEmail
In the News