The College was represented in races for federal and state legislatures, governorships. 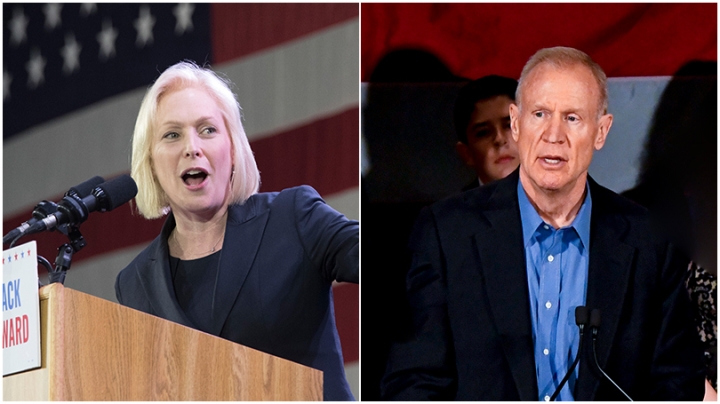 The Nelson A. Rockefeller Center for Public Policy will host a post-midterm panel on Thursday titled “2018 Mid-term Elections: What Might Change as a Result?” featuring sociology, government, and history faculty. The discussion begins at 5 p.m. in Rockefeller Center room 003.

Dartmouth alumni swept the U.S. House and Senate Tuesday and had mixed results in governors’ races, while Hanover elected a Dartmouth undergraduate to the New Hampshire House and returned an alumna to the State Senate in Concord, where they join new Democratic majorities in both chambers.

Democrat Garrett Muscatel ’20 took one of four seats representing Hanover and Lyme in the New Hampshire House, while fellow Dartmouth student Baronet “Webb” Harrington, a Republican, fell short in the five-person race. Democrat Sen. Martha Hennessey ’76 won reelection to the State Senate. Garrett and Hennessey head to Concord in January after New Hampshire voters split the ticket, flipping both houses to Democrats while returning Republican Chris Sununu to the governor’s office. New Hampshire governors are ex officio members of the Dartmouth Board of Trustees.

In U.S. Senate races, Democratic Sen. Kirsten Gillibrand ’88 won reelection by a 2 to 1 margin in New York; independent Sen. Angus King Jr. ’66 received more votes than his Republican and Democratic challengers combined to win a second term representing Maine; and Democrat Tina Smith, Tuck ’84, won a special election in Minnesota to hold the seat she inherited from Al Franken after he resigned earlier this year.

None of these congressional races were viewed as critical in the midterm battle for control of Congress, which saw the Republicans retain the Senate and brought in a new Democratic majority in the House.

Another New Hampshire state position that is selected not at the ballot box, but by majority vote of the New Hampshire House, is secretary of state. Democrat Colin Van Ostern, Tuck ’09, is widely viewed as the favorite to replace longtime Secretary of State Bill Gardner when the new Democratic majority convenes. Gardner, who has been the guardian of New Hampshire’s first-in-the-nation primary since he was first elected in 1976, has drawn the enmity of many Democrats with his participation in the Trump-inspired “voter integrity panel” and his support for Republican-backed legislation tightening voter registration requirements in the state.