Can Xylophones ‘Talk’? Yes, in Africa, and Soon, at the Hop 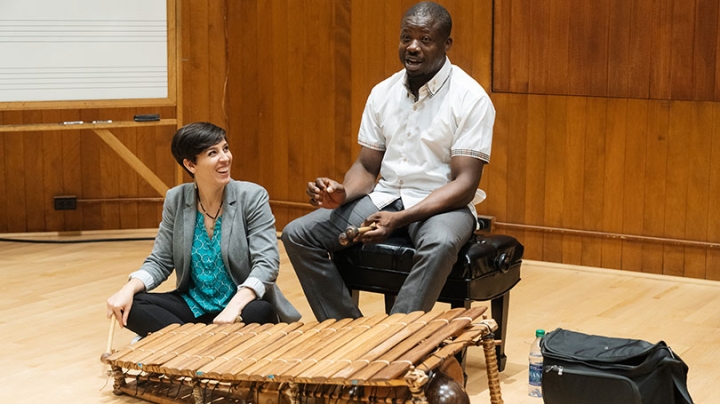 Laura McPherson, assistant professor of linguistics, and musician Mamadou Diabate lead a balafon workshop for students at the Hopkins Center for the Arts. (Photo by Eli Burakian ’00)
11/02/2018
Body

This fall, on Wednesday afternoons, the syncopated rhythms of balafons—African xylophone-like instruments—have been spilling out of Faulkner Recital Hall in the Hopkins Center for the Arts. It’s a call-and-response improvisation. In a lilting voice, Mamadou Diabate, one of Burkina Faso’s most illustrious musicians, recites a traditional lyric, and beginning players—students and a few faculty— try to find those notes on their balafons, creating a tune that sounds a lot like what they have just heard Diabate say.

In this way, the performers are doing more than adding melody to lyrics. They are directly translating speech into song. 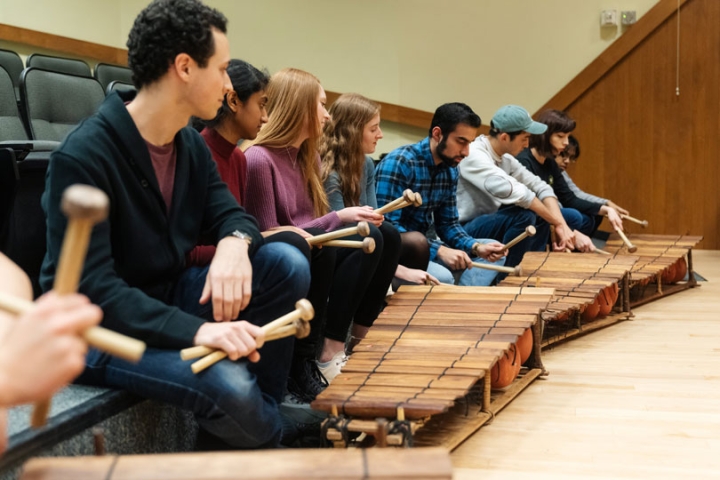 Students play balafons in a workshop about the connection between music and language in Burkina Faso. (Photo by Eli Burakian ’00)

Assistant Professor of Linguistics Laura McPherson and Theodore Levin, the Arthur R. Virgin Professor of Music, are also practicing on balafons. With Diabate, they’re co-teaching a class called “The Language-Music Connection.” Diabate’s band, “Percussion Mania,” will perform at 7 p.m. Wednesday, Nov. 7, in Spaulding Auditorium at the Hopkins Center for the Arts.

It’s no coincidence, says McPherson, that balafon notes closely approximate the sounds of Seenku, an unwritten language that is still spoken, but is endangered, in Burkina Faso.

“Seenku—also known as Sambla—is a complex tonal language,” she says. “You have to pronounce the pitch right in order for words to mean the right thing.” For example, she says, the Seenku word for “wood” is phonetically just like the word for “dry,” but the speaker distinguishes them by altering vocal pitch.

In 2013, doing field research with language teachers in Burkina Faso, McPherson began exploring the connection between music and speech. “If you need to pay close attention to pitch when you speak, what do you do when you sing?” she asked. Her teachers brought her recordings of Diabate playing the balafon.

“At first, I thought, that doesn’t really answer my question,” says McPherson. Then came the “aha” moment. When native Seenku speakers told her, “We know what the balafon is saying,” she realized how closely music and speech are tonally connected in their language.

The following year brought a non-violent revolution in Burkina Faso, and McPherson didn’t return. But she did go to Europe, which is where she tracked down Mamadou Diabate, who was living in Vienna. “He was so famous, I didn’t think he’d answer my email,” she recalls.

But he did, and invited her for a visit. They have been working closely together ever since to keep the Seenku language alive in music and in speech.

McPherson has a grant from the National Science Foundation to support that work. “My job as a linguist is to document the grammatical structure of Seenku and to figure out how the tonality works,” she says. “The tones are clearer on the balafon than in everyday speech, so if I had not met Mamadou, I’d be about three years behind in my research. I feel like the richest person in the world for having learned so much from him about his culture, traditions, language—everything.”

Diabate says he owes a debt to McPherson for bringing him and his band to Dartmouth and renewing worldwide interest in the music of his country. Speaking in French, with McPherson translating, he says he had not thought of his tradition as remarkable until she helped him hear how music functions in his culture as a surrogate language—a language that pre-dates the colonial rule that sought to replace his native Seenku with French.

“Laura has opened my mind,” Diabate says. “She is a jinn—a spirit who knows everything without having to ask.”