Faculty Panel Digs Into the Midterms at Post-Election Forum 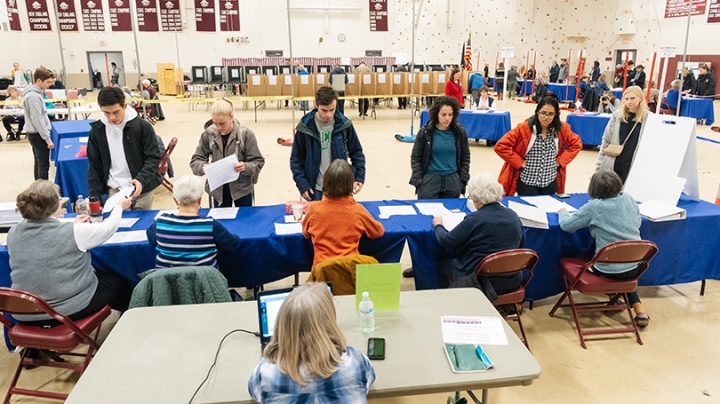 Dartmouth students joined voters across New Hampshire in a record midterm election turnout Tuesday, according to the secretary of state’s office. (Photo by Eli Burakian ’00)
11/08/2018
Body

The midterm results, with Democrats regaining control of the House and Republicans adding seats to their slim majority in the Senate, were true to longstanding American political tradition, faculty from government, history, and sociology agreed in a post-election panel discussion this week.

“The framers of the Constitution put a lot of thought into having presidential elections every four years and these midterm congressional elections in between them. This creates a phenomenon called midterm loss,” said Professor of Government Dean Lacy, showing a chart of midterm seat losses for the president’s party dating back to the early 20th century.

“This is the only thing that Donald Trump’s done that’s predictable. His seat losses in 2018 are exactly on that regression line.”

More than 100 students, faculty, alumni, and community members turned out for the discussion hosted by The Nelson A. Rockefeller Center for Public Policy, with the crowd spilling into an overflow room next door with a live-stream video of the discussion with Lacy, Associate Professor of History Leslie Butler, the Class of 1925 Professor of Sociology John Campbell, and moderator Linda Fowler, the Frank Reagan Chair of Policy Studies, Emerita. 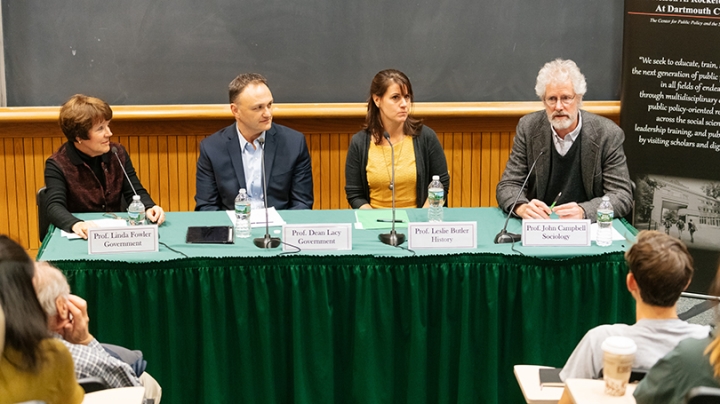 Fowler dug beyond the top-line numbers to set up the discussion, noting that Democrats took seven governors’ races, gained a majority of attorneys general seats around the country, and picked up more then 300 seats in state legislatures, turning around but still not erasing the party’s losses during the Obama presidency.

And there were many counter-intuitive results such as voters restoring the franchise to felons in Florida by a margin of more than 60 percent while the Senate and governor’s races in the state remained too close to call.

The heated rhetoric of the 2018 midterms, with dire warnings of immigrant invasions and denunciations of cultural elites, has also been part of American politics for more than 100 years, said Butler. Nativist parties stirred up fears of Irish and German immigrants, the “America first” movement dates to the mid-19th century, and Andrew Jackson railed against Eastern elites before the Civil War, she said.

Campbell, whose new book American Discontent: The Rise of Donald Trump and Decline of the Golden Age explores sociological conditions that helped Trump win the election, also sees the current political climate as developing over decades. Politics arising from anger about economic stagnation, racial scapegoating, and an economic approach based on tax cuts, spending cuts, and deregulation, have been around for decades.

“These factors were still very much in play in the midterms,” Campbell said. And these trends have deepened political polarization. “They did not go away on Tuesday and arguably we’re going to see more of this for a while.”

Butler also sees historic echoes in the current debate over the election process, with some politicians pressing for stricter registration rules, calling for purging of voter rolls, and making unfounded claims of widespread voter fraud.

“I think the technical term is shenanigans,” Butler said. “That’s another through-line of American history—a real deep and pervasive ambivalence about anything actually approaching what we might call universal suffrage.”

A student asked if the increased voter turnout, particularly among young people, was cause for optimism.

Fowler applauded Dartmouth students Garrett Muscatel ’20, who was elected to one of four seats representing Hanover and Lyme in the New Hampshire House, and Baronet “Webb” Harrington, who fell short in the same five-person race, for their participation and enthusiasm, and all of the panelists agreed that high participation among young people and women was a vital infusion for the country.

“Democracy is a habit. It’s a muscle. You learn it, you work it,” Butler said. “This goes back to Alexis de Tocqueville. We learn the habits of democracy by engaging in democracy. Self-governance can’t be taught it has to be learned on the job.”