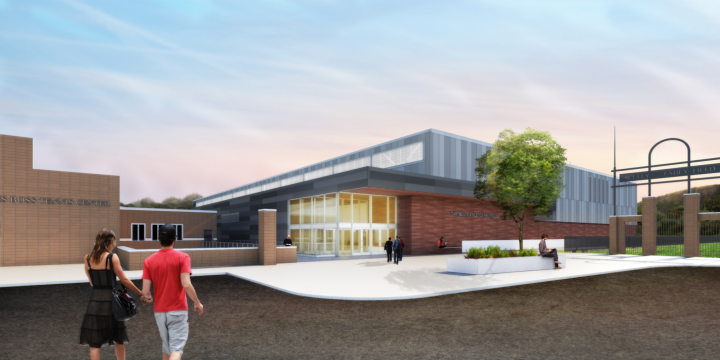 An artist’s rendering shows the indoor practice facility, to be located next door to the Boss Tennis Center.
11/05/2018
Body

Dartmouth is moving forward with construction of an indoor practice facility, creating much-needed space for athletic teams to use when the cold weather forces them off outdoor playing fields.

Resuming the construction process on the long-planned indoor facility comes as the result of the New Hampshire Supreme Court’s reversal today of a lower court decision upholding the denial of the project, which has been in the planning stages for more than three years.

The 4-0 ruling says that evidence does not support the September 2017 New Hampshire Superior Court decision upholding the town of Hanover’s planning board denial of site plan approval for the facility, which is planned for land adjacent to the Boss Tennis Center and is currently used for outdoor sports practice.

“(T)he evidence does not reasonably support the trial court’s findings. The certified record confirms that the board based its denial of Dartmouth’s application upon subjective and personal feelings and the trial court unreasonably adopted a rationale not supported by the record to affirm the board’s decision,” says the decision, written by Associate Justice Patrick Donovan.

College officials hailed the ruling and said they are considering proposals from construction managers to move the project forward.

“We are gratified by the decision of the Supreme Court of New Hampshire that will allow for the construction of an indoor practice facility as part of Dartmouth’s athletic complex. We look forward to working with the town of Hanover and the planning board as we advance construction planning,” the College said in a statement.

Athletic Director Harry Sheehy said, “This a great day for our dedicated student-athletes and coaches, who work tirelessly to represent the College and the Upper Valley community with pride. We are enormously grateful to our institutional colleagues for their support and perseverance, and, most of all, to our donors for their patience and extraordinary generosity.”

The College wants to build the indoor facility to increase practice time for teams and for use by club sports and other recreational activities. At the northernmost Ivy League institution, Dartmouth’s athletes don’t have as much practice time as some of their competitors due to a lack of indoor space, Sheehy said. The facility, with artificial turf, is to be used year-round by soccer, football, lacrosse, softball, and other teams.

The 70,000-square-foot facility, to be funded entirely through gifts to the College, would be built near the similarly sized Boss center and Thompson Arena. Also in the area are a number of outdoor playing fields and tennis courts. 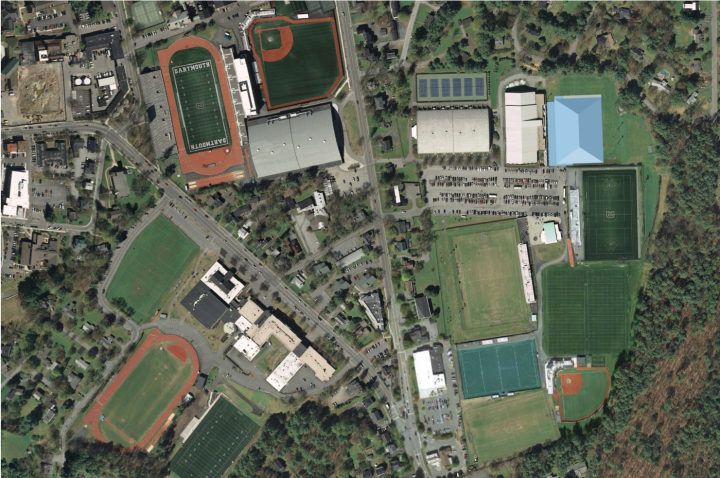 An overhead view of athletic fields and buildings shows the future location of the practice facility, marked by a blue roof.

The town planning board did not dispute that the design and siting of the facility met all the requirements of the town’s site plan regulations and its zoning ordinance. However, in its 4-1 denial of the permit, some board members relied on “general considerations” in the town’s site plan regulations, arguing that the building had some impact on abutters and was inconsistent, in their view, with the “harmonious” or “aesthetically pleasing” development of the town, according to the board’s decision.

Dartmouth officials strongly disagreed, noting that the planning board staff recommended approval of the project with conditions, and that the only specific impact noted was a disputed increase in shade on several properties for a few hours a day during a small period each year. Dartmouth appealed the planning board’s ruling to the Superior Court and the court upheld the planning board’s decision, prompting Dartmouth’s appeal last September to the high court.

At the time, Dartmouth Executive Vice President Rick Mills said the potential impact of the decision extended well beyond the College and was “relevant to others in the state committed to responsible development based upon clear and definite standards of design and review.”

“We are concerned about appropriately defining the scope of a planning board’s power to interpret and apply zoning and planning regulations, where plans under consideration are in conformity with zoning and regulatory requirements. It is for this reason that we have appealed,” Mills said at the time.

The high court’s ruling addressed the College’s concern, saying that sustaining the planning board decision would “sanction a denial of a property owner’s site plan application simply because board members felt that the owner’s permitted use of its own property was inappropriate. Such a finding would render zoning ‘obsolete, as it would afford no protection to the landowner,’ ” said the decision, citing legal precedent.

The case before the Supreme Court was Trustees of Dartmouth College v. Town of Hanover, but the town did not file a brief in the case. Concord, N.H., attorneys represented abutters of land where the facility is to be built, opposing the appeal and appearing as intervenors in the case.