At the Hop, a Re-Envisioned ‘Coriolanus’ Knits Together Past and Present

Shakespeare’s play is a focal point for classes, field trips, and public conversation. 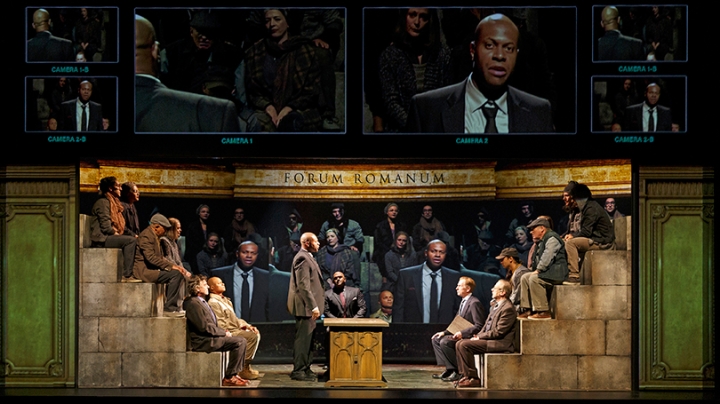 Economic inequality, political machinations, a dangerously divided electorate. Terrible news, not just these days, but in Roman times, and in 17th-century England. In one of his last tragedies, Coriolanus, William Shakespeare tells the cautionary tale of a warrior-turned-politician doomed by his failure to show concern for ordinary citizens. Re-envisioned as a fast-paced, multi-media production, Coriolanus moves this month from the Stratford Theater Festival in Stratford, Canada, where it had its world premiere, to the Hopkins Center for the Arts

“The transfer of this production from Stratford to Hanover is a watershed moment for the Hop,” says Mary Lou Aleskie, the Howard L. Gilman ’44 Director of the Hopkins Center. “We want to use this cutting-edge work as an opportunity for a yearlong conversation about the political themes of the play, about how technology can enhance theatrical storytelling, and how classical theater is relevant today.”

In Stratford’s critically acclaimed production, director Robert Lepage sets the rise and fall of a fifth-century Roman general in a contemporary, media-crazed world. The New York Times describes the Stratford production as both “riveting and troubling,” with innovative effects “used so incessantly here, with such technical skill and in such striking combinations, as to render them newly expressive.” Onstage, sliding boxes and panels create “stage equivalents of pans and tracking shots, irises, close-ups and letterbox effects,” says the Times.

At Dartmouth, Coriolanus is a springboard for multidisciplinary learning. Earlier this fall, a group of students and faculty took a road trip to Stratford to meet artists, see plays, take part in scholarly discussions, and watch the filming of the play.

Film and media students are making a documentary about the residency. Students from English courses are writing a series of essays and program notes, interviewing actors and moderating post-show discussions. Theater students are shadowing members of the company and serving as liaisons between them and the campus community. School groups from surrounding communities will attend matinee performances Nov. 29 and 30 in the Moore Theater.

Leading up to opening night, in a series of conversations at the Top of the Hop, Dartmouth faculty and Stratford actors will address issues raised by the play: modern media in the digital age, female power in Shakespeare’s works, the color-conscious casting of the production, gender roles on the battlefield, and Oedipal complexes in literature.

On Nov. 29, C.J. Astronomo, a technical director from Stratford, will wrap up the Top of the Hop talks with “21st-century Storytelling: The High-Tech Design and Transfer of Coriolanus.” A free, public, kick-off party for the production will follow, featuring refreshments and chances to mingle with actors and crew.

The Stratford Festival presented its first season in 1953, using an innovative stage that revolutionized Shakespearean performance and inspired the design of several major venues worldwide. Since then, the festival has attracted more than 28 million theatergoers from around the world.

“Both Stratford and the Hop regard this adventurous production as an opportunity to take much further a rich creative and educational connection made a generation ago between the two organizations,” says the Hop’s Aleskie.

For a complete schedule of activities and to learn more about the production, visit the Coriolanus website. 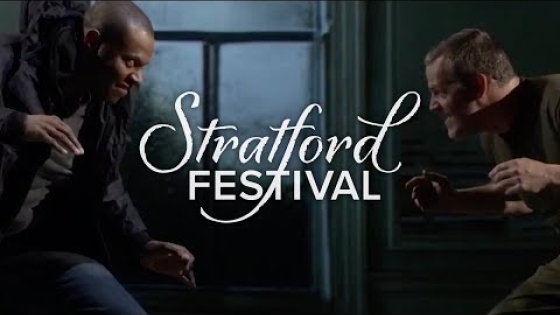