On the Menu: Empanadas and Learning

A Spanish project on food and sustainability culminates in a food truck on the Green. 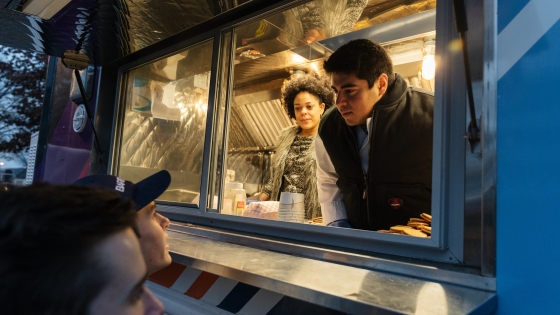 What happens when Dartmouth’s Spanish language program teams up with the Experiential Learning Initiative, the Office of Sustainability, La Casa, and the Organic Farm for an immersive, term-long project?

Deliciousness, that’s what—in the form of empanadas, congri (rice and beans), caldo Gallego (Galician soup), and rema de calabaza (cream of pumpkin soup), all researched and prepared by students, and served to the public at a food truck that pulled up in front of Dartmouth Hall on a drizzly November afternoon at the end of fall term.

Students in the fall sections of Spanish 1, 2, and 3 participated in the project known as “The Sustainability of Language and the Language of Sustainability,” designed and implemented by the senior lecturers in the Department of Spanish and Portuguese.

“Since the beginning it was very clear for us that we needed to consider not only the Spanish language as a sustainable resource, but all the persons, places, and objects involved in it,” says Senior Lecturer Natalia Monetti. “Because of that, we planned to integrate all the available resources on campus connected to the Spanish language and food. We invited the O-Farm, the Office of Sustainability, La Casa, and of course the Department of Spanish and Portuguese. All the activities designed were based on the experiential learning approach in order to make students engage intellectually, emotionally, creatively, and physically in a direct experience.”

Students took a field trip to the Organic Farm to see where their food came from, integrated the farm produce they saw into recipes for Hispanic-style foods, and cooked the recipes at La Casa, the Spanish-language affinity house.

“For some students, this was their first opportunity to be in a kitchen doing something productive while practicing a language,” Monetti says. “Besides peeling, cutting, and cooking while following instructions in Spanish, the students needed to wash the dishes and document the cooking process. We also listened to some cool contemporary Spanish music.”

Finally, they got to serve their creations to the Dartmouth community—who had to order food in Spanish (assistance provided as needed).

“There are very few occasions, other than final exams, for students in multi-section courses to get together, let alone interact with students in the levels above or below,” says Roberto Rey Agudo, language program director in Spanish and Portuguese. “Experiential-learning projects provide students the opportunity to develop a sense of pride and ownership in their participation in the language sequence.”

Monetti says she and her colleagues hope to do a similar project next year.

Additional sponsors of the project include the Dean of the Faculty and the Dartmouth Center for the Advancement of Learning.