Two visiting alumni tell a QSS class how they use data in hockey and baseball. 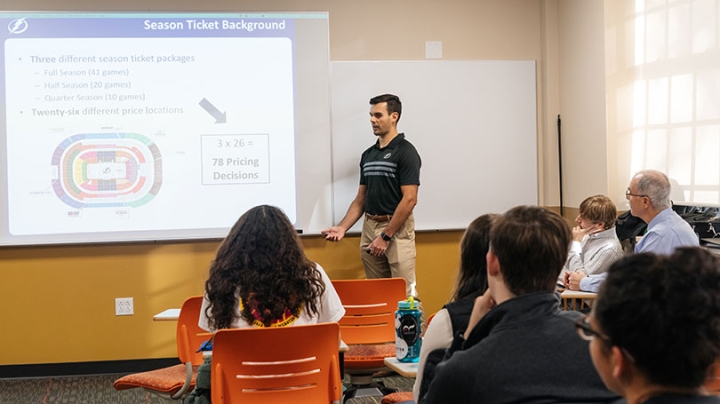 Dartmouth’s program in Quantitative Social Science (QSS) is opening doors for recent alumni to fields where big data solve problems and predict outcomes. Some of those dream jobs are in professional sports.

Meet Shane Weisberg ’16 and Garrett Schirmer ’16. Right after graduation, Weisberg landed an internship that turned into a job with Major League Baseball. In the growth and strategy department, he’s been collecting and analyzing data to help the MLB harness the power of social media, and perhaps add new teams in locations most likely to support them.

Schirmer took a similar marketing position, first with the Cleveland Indians, and later with the Tampa Bay Lightning, his longtime favorite hockey team.

In late October (in the middle of the 2018 World Series), the two friends came back to campus to speak to QSS students in the “Sports Analytics” class co-taught by President Philip J. Hanlon ’77 and Michael Herron, the Remsen 1943 Professor of Government and chair of QSS.  In this course, students learn statistical methods needed to analyze game outcomes and evaluate players and strategies.

“One of the really important phenomena in recent years has been the growth of data related to people and people’s activities,” said President Hanlon. “Quantitative social science is all about bringing advanced analytical tools to this new trove of data.”

“We like to invite to the class young people who are working for organizations that are attempting to use analytical tools in interesting ways,” said Herron.

Schirmer has been using his QSS skills to figure out how much the Lightning can raise season ticket prices without losing customers. The cost of a season pass varies, depending on seat location and games package. “We have three packages in 26 different arena locations, so we have to make 78 different pricing decisions each season,” Schirmer told the class.

Before he began working for the NHL team, he says, season tickets went up 3 to 5 percent each season across the board. “I identified that as a place for improvement, because we know that some groups of customers are willing to pay more than others. So a flat increase is not optimal.”

Schirmer identified and analyzed variables, including seat location, purchase history, team performance, plan type, number of tickets used, number of team emails customers opened, and the projected package price. A set of color-coded graphs (with over 11,000 rows of data) led him to predict that if season ticket prices rose from 6 to 15 percent, depending on the package, the renewal rate would be at least 90 percent.

“We’d never raised the price of a season ticket more than 7 percent, and never had a renewal rate better than 89 percent,” Schirmer said. “The executive team looked at me like I was crazy.”

At the MLB, Weisberg gathered data to show that certain teams (think Red Sox and Yankees) will fill seats even for away games. He’s also trying to learn which kinds of social media posts are the best click bait.

“We built a system that allows team employees who post on social media to label their posts,” he told the class. “For example, do home run highlights outperform pitching highlights? Next season we can do an analysis on what kinds of digital advertising are most effective in terms of ticket sales.”

Both Weisberg and Schirmer say that QSS has given them an edge over competitors in their field and within their workplaces.

Weisberg says he learned at Dartmouth not just how to collect and interpret data, but how to present his findings to others using engaging, informative graphics. “Just the fact that I have the background to develop presentations to show anticipated effects of changes—that adds a lot of credibility to my proposals,” he said.

Schirmer agreed. “A lot of people come in from math or economics, but they don’t have the applied side of things, which I got from this sports analytics course, so I have definitely found that to be an advantage,” he said after class. “This one course opened my eyes to a different way of thinking about problems.”