Professor Thomas Luxon talks about the way the production at the Hop blends past and present.

André Sills, second from left, plays the title role in Coriolanus, opening Friday at the Hop. (Photo courtesy of the Hopkins Center for the Arts)
11/25/2018
Body

The U.S. premiere of Coriolanus, Shakespeare’s tragedy about a patrician Roman general who destroys his political career by failing to conceal his contempt for common people, comes to the Hopkins Center for the Arts Nov. 30 through Dec. 2. 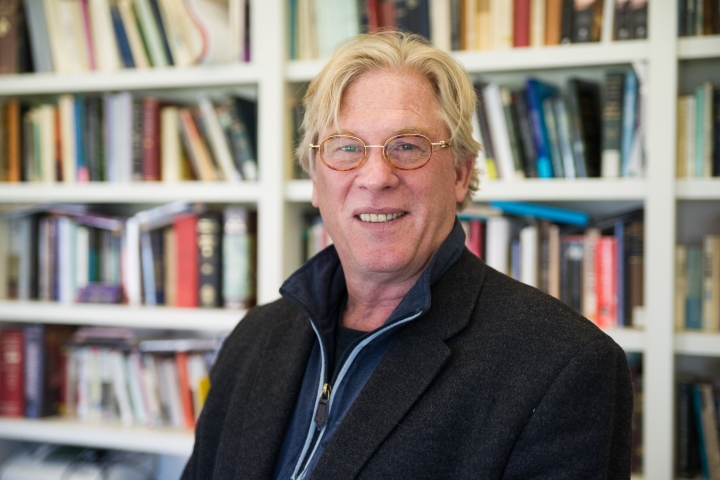 The collaboration with the Ontario-based Stratford Festival has been a springboard for master classes and public conversations led by Dartmouth faculty and members of the theater company and crew. Professor of English Thomas Luxon recently spoke with Dartmouth News about the play’s historic context and contemporary resonance.

What do you think audiences should know about Shakespeare’s time, as well as ancient Rome, before they take their seats in the Moore Theater?

Well, there are multiple levels here. There’s Shakespeare’s Coriolanus and there’s the Coriolanus he learned about from Plutarch—because that’s how he would have been schooled. Shakespeare asks, “How do I understand where I am now in 1609, in Jacobean England, by using Rome as a lens? The Coriolanus that I think Shakespeare sees first and foremost is a patrician who holds plebeians in utter contempt.

How did that gulf between haves and have-nots play out in the political landscape of Coriolanus’ era?

In Rome at this time there are 52 patrician families—including senators and consuls—and then there’s everybody else. When the play opens, Rome has just thrown off the tyranny of monarchy and decided to set up a republic. Well, just what is a republic? The people, the public, must have some role in a republic. And just what is that role? As Coriolanus opens, those questions are aggravated by a food riot. The public thinks that the patricians are hoarding grain, and the public thinks that the patricians are feeding off them and their work and starving them.

This will strike a chord, won’t it, for audiences in a world where much of the wealth is held by the so-called “1 percent”?

Yes. In Shakespeare’s play, the people think that the patricians, the 1 percent, are getting richer at their expense, even at the expense of their lives. Coriolanus is a patrician and a warrior who wants to be a powerful leader—a consul. Traditionally, in that time in Rome, consuls were often chosen from among war heroes. That’s why at first he seems to be a shoo-in for the consulship.

But first he has to seek public approval?

In order to assume the role of consul, he needs the blessing of the senate and the voice of the people. Traditionally, he’s supposed to put on the robe of humility and show the people his war wounds, and by so doing, recruit their support. This is the only way that people have a voice, other than through representatives called tribunes, an innovation Coriolanus detests.

But against his mother’s advice, Coriolanus refuses to do this, because he openly hates commoners. Does that make him a villain? At least he’s not a liar.

Well, if we see Coriolanus as a tragic figure, and there are scholars who’ve been arguing about this for a long time, then he’s tragic because he has too much integrity to hide his disdain from the people just long enough to get power. But if he did get power, he would starve the people, basically, and the consulship would become a kind of tyranny.

How does this story set in ancient Rome relate to Shakespeare’s Jacobean England at the turn of the 17th century?

In this production, parallels to modern politics are hard to escape. For example, you see ancient characters in the Roman Forum texting what could be fake news to each other.

Old-fashioned texting, I guess. Also, some of the action and speeches in this production are projected on film, yet actors also walk around on stage in real time. What’s that like to watch?

At first, when I saw the performance in Stratford earlier this year, I found it unsettling. The lighting is what you’d expect from a cinematic experience, and there are panels on stage, projections, with different aspect ratios. I kept asking myself, am I watching a person, or a projection of a person? Are those actors? Where is the line between people and their projections? Lepage does it so skillfully with lighting and sound that it’s hard to tell, at first. And then you sort it out and go with it.

What do you think is the artistic purpose behind all that multimedia?

Dramatically, the director, Robert Lepage, is forcing you to ask yourself, all the time, “Is this my screen reality, or is this my present reality? Is this in real time? What is real time?” But over the course of watching this production, you realize that’s a naive question.

Because we trade screen reality for present reality all the time.

So that’s the media-obsessed 2018 lens through which we view this tragedy?

I would call this production a temporal palimpsest. Our time is overlaying Shakespeare’s time, reproducing the kind of overlay that Shakespeare was doing with Roman time. The play and what the director has done with it—they are both incredibly rich.