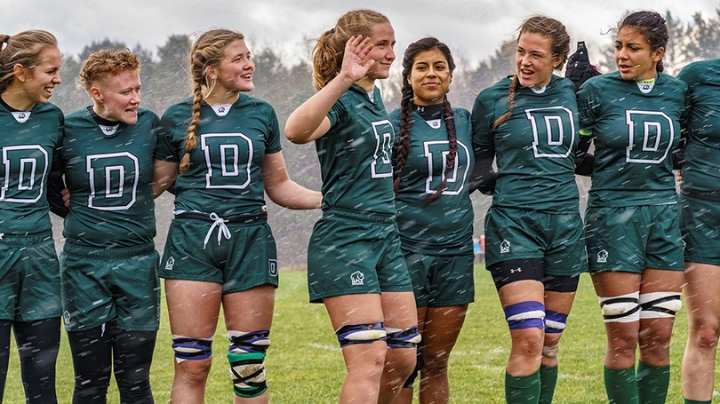 Two of three Big Green championship contenders will be battling the elements along with their rival teams this weekend as a Nor’easter swept through New England.

Dartmouth football and women’s rugby will play for top league honors at home this weekend, while women’s cross-country heads to the 2018 NCAA National Championship meet this weekend in Madison, Wisc., where a forecast of 33 degrees and fair skies offers welcome relief from Hanover’s winter storm warning.

Big Green football (8-1 overall and 5-1 Ivy League) needs to defeat visiting Brown (1-8, 2-4) Saturday at Memorial Field, and have Penn (6-3, 3-3) upset undefeated Princeton (9-0, 6-0) to claim a share of the Ivy League crown. Dartmouth’s only loss of the season came at the hands of the Tigers at home on Nov. 3 in a heartbreaking 14-9 loss after Dartmouth had led for three quarters.

Regardless of what the wintry storm brings to the field, Athletics had already been contending with side effects from the early cold snap. The extreme cold this week has left a good deal of ice on the Memorial Field bleachers, particularly on the shadier west side. As a result, spectator seating will be available only on the east side when Dartmouth Football hosts Brown University on Saturday afternoon.

Because of the modified conditions, Dartmouth will not charge admission to Saturday’s game, and all requests for ticket refunds will be honored, Athletics announced today. Requests should be submitted to Big.Green.Tickets@Dartmouth.edu by Dec. 15.

The artificial playing surface has remained ice-free, and crews are plowing the snow from this today’s storm. Kickoff is scheduled for 1:30 p.m. tomorrow.

The game will be video streamed live on ESPN+ and broadcast on ESPN Radio 94.5 FM.  The Hanover Inn will be showing the game live in their Ford Sayre/Brewster function room.

After winning its quarterfinal match against Brown handily last Saturday, the Dartmouth women’s rugby team advanced to the National Intercollegiate Rugby Association Semifinal today, where it will play No. 4 seed Army West Point. Due to the storm making its way toward Hanover, today’s games have been moved to Scully-Fahey lacrosse field on campus.

The Big Green and the Black Knights will face off at noon before Harvard and Quinnipiac meet at 3 p.m. The winner of semifinal one and two will meet at 1 p.m. on Sunday, Nov. 18.

The Dartmouth women’s cross country team heads to the 2018 NCAA National Championship meet this weekend in Madison, Wisconsin. The team earned one of two automatic berths to nationals, thanks to a second-place finish at the Northeast Regional last weekend in suburban Buffalo.

Dartmouth is currently 18th in the U.S. Track & Field Cross Country Coaches Association ranking, second among Ivy teams only to No. 17 Columbia. The team is 28th in the national poll.