The win over Harvard earned the first NIRA title in the varsity team’s four-year history. 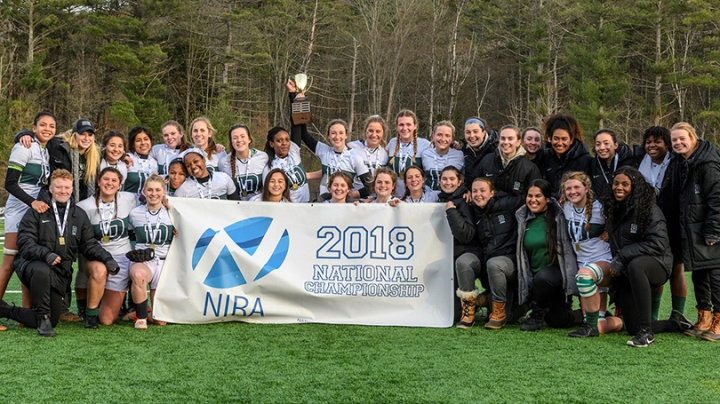 This is the Big Green’s first NIRA championship title since women’s rugby became a varsity sport four years ago.

Captain Camille Johnson ’19 was named Most Valuable Player after the game.

“This was an incredible final from both teams and a great example of NCAA women’s rugby at its best,” head coach Katie Dowty said. “I’m extremely proud and grateful and so happy, especially for our seniors. They were the first class when we went varsity, and for them to see us get to number one following four years of really hard work is huge.”

Big Green football ended the 2018 season 9-1 with a 49-7 triumph over Brown on Saturday afternoon at an icy Memorial Field, finishing second in the Ivy League behind the undefeated Princeton Tigers.

Headed into the weekend, Dartmouth had a chance to share top Ivy honors, but the team did not get the help it needed (that is, Penn winning), as Princeton finished off a 10-0 season with a 42-14 victory over Penn, leaving the Big Green as the second team in Ivy League history to win nine games but not take home at least a share of the conference crown.

Run on the University of Wisconsin’s Thomas Zimmerman 6K Course, the Big Green were led by Georgia Fear ’20, who finished the race in 21:19.79 to earn 103 points.

Dartmouth placed seventh out of 10 teams that are among the best in college sailing.