250th Anniversary: Honoring Our Past, Inspiring Our Future

Kicking off the year will be a day of celebrations taking place in locations all over campus on Jan. 10. 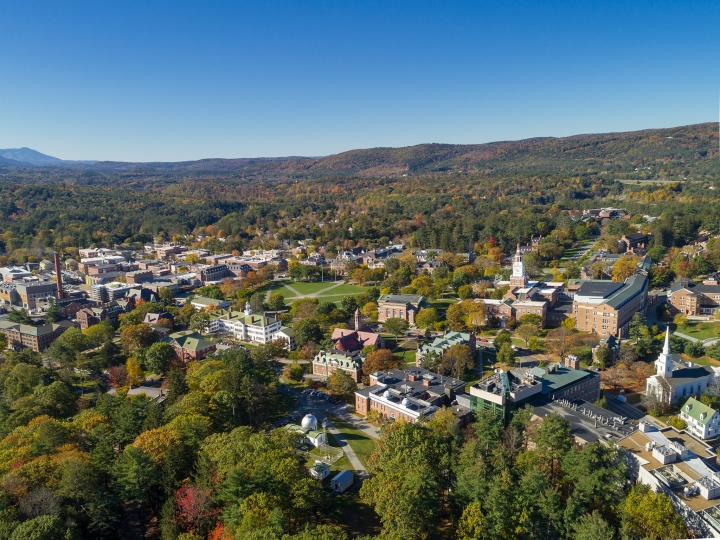 Dartmouth will commemorate the 250th anniversary of its founding throughout 2019 with a slate of celebrations, academic and arts programming, and an unprecedented service opportunity for the entire global community. Activities for the sestercentennial anniversary will begin in January with the theme “Honoring Our Past, Inspiring Our Future.”

“This is an ideal time to reaffirm our liberal arts foundation, our tradition of world-changing research, our profound sense of place, and the unique Dartmouth spirit,” says President Philip J. Hanlon ’77. “As we reflect on our history of impact and influence, we will also look ahead to a bright future creating new generations of leaders.”

Cheryl Bascomb ’82, vice president for alumni relations, says, “There is much to celebrate, much to learn, and much to consider as we move into 2019. We’ve created many ways for the Dartmouth community to get involved. The anniversary is an opportunity for our global community to mark the enduring nature of our institution and to become inspired by—and participate in—where we’re going.”

The sestercentennial will be celebrated in a range of academic courses for students, at conferences and symposia, reunions and homecoming, and much more.

“Dartmouth’s 250th celebration bears the promise and challenge of a refounding moment in that it offers the entire Dartmouth fellowship the yearlong occasion to honor and learn from the best of what we are and have done and wholeheartedly embrace future possibilities for improving ourselves and the world,” says Donald Pease, the Geisel Third Century Professor in the Humanities, who is co-chairing the 250th celebration with Bascomb.

The 250th website will be updated frequently as activities and events are added to the anniversary celebration. The sestercentennial events are organized into six areas:

Celebrations: Kicking off Dartmouth’s 250th year will be a day of celebrations taking place in locations all over campus on Jan. 10.

Special series taking place throughout the year include Dartmouth on Location 250 events—for alumni and other Dartmouth friends—in a number of U.S. cities, in which Dartmouth leaders and scholars talk with alumni and Dartmouth parents on a variety of issues. The first event is set for New York City on Jan. 12, to be hosted by CNN news anchor Jake Tapper ’91 and actor David Harbour ’97.

Also on Jan. 12, alumni and friends are encouraged to show their Dartmouth pride by wearing green clothing for Greenlighting Day, when landmarks around the world will be illuminated in green light to celebrate the College’s anniversary. The landmarks include: Niagara Falls; One World Trade Center and the Empire State Building, both in New York City; Boathouse Row, in Philadelphia; the Capital Ferris Wheel in National Harbor, Md., just outside Washington, D.C., and Dartmouth Hall. Alumni groups across the country and abroad are welcome to join Greenlighting Day on social media and with their own hometown landmarks awash in green light.

On July 26, Dartmouth will host a summer celebration on the Green for the Upper Valley community that will feature music, family activities, area vendors, a Friday night movie, and a Saturday night concert.

Learning and Ideas: Courses, conferences, and symposia are planned for the year, including a March 1 and 2 conference on the Dartmouth College Case, the landmark U.S. Supreme Court ruling in 1819 that held that the College would remain a private institution and not become a state university. As alumni through the ages have learned, arguing the case for Dartmouth was Daniel Webster, Class of 1801, who told the justices, “It is, sir, as I have said, a small college. And yet there are those who love it!” Legal experts say the case has great significance, with the court’s decision determining that the U.S. Constitution’s contract clause prohibits states from impairing a contract—in this case, Dartmouth’s charter.

The legal ruling will be the theme of a Dartmouth Library exhibit and the basis for a new undergraduate course, one of a number in the works for 2019 winter and spring terms. The course will be taught by Pease, Professor of History Robert Bonner, and J. Russell Muirhead, the Robert Clements Professor of Democracy and Politics.

Also planned is a June 14 conference in Hanover on Dartmouth’s vision of a liberal arts education for the 21st century. Conferences are also being planned on 100 Years of Women on the Dartmouth faculty; the tumultuous year of 1969 (Dartmouth’s 200th anniversary); and the College’s relationship to slavery.

Courses in the works will focus on Dartmouth as a religion taught by Susan Ackerman ’80, the Preston H. Kelsey Professor of Religion; Dartmouth fiction from Richard Hovey, Class of 1885, to Louise Erdrich ’76, taught by James Dobson, a lecturer in English and in the Master of Arts in Liberal Studies program; Collective Memory of Slavery at Dartmouth, taught by Deborah Karyn King, an associate professor of sociology; and the legacy of George Ticknor, Class of 1807, for his seminal academic work in Spanish literature.

Service: A yearlong service initiative called The Call to Serve seeks to involve thousands of community members—students, faculty, staff, and alumni—volunteering their time for meaningful causes, with a goal of donating a total of 250,000 volunteer hours. Members of the Dartmouth community will also be invited to events around the country and abroad highlighting the impact of The Call to Lead fundraising campaign. Also related to the campaign, Dartmouth will invite alumni and parents to support access and affordability for the future generations of Dartmouth students by creating 250 new scholarship endowments in Dartmouth’s 250th year. Financial aid is a core component of The Call to Lead campaign, allowing Dartmouth to attract outstanding students regardless of their ability to pay tuition.

“We welcome the community’s efforts to use this anniversary as an opportunity to make an impact around the globe,” says Bascomb. “We hope our alumni and the entire Dartmouth community will answer the call to serve as well as the call to lead. We encourage you to initiate an event with your organization, your former athletic teams, your classmates, your friends. There is no better time than our anniversary to come together in the name of  Dartmouth and to have an impact on our world.”

Arts: The Hopkins Center for the Arts is hosting a series of events in January that recognize Dartmouth’s Native American history, including a documentary film, Rumble: The Indians Who Rocked the World, on Jan. 20 and, on Jan. 30, an evening of performances called Indigenous Rising: An Evening of NextGen Native Artists. On May 25, the Dartmouth Symphony Orchestra will premiere a commissioned work inspired by the mural cycle painted in 1932-34 by José Clemente Orozco. The concert will be recorded for rebroadcast on the National Public Radio show “From the Top.” The murals, which have been designated a national historic landmark, are located in the Dartmouth Library reserve reading room and are considered one of the finest examples of mural painting in the country. A second 250th commission, this one for the Dartmouth College Wind Ensemble by composer Oliver Caplan ’04, will premiere in the fall of 2019 and will highlight special places at the College. Caplan has asked members of the Dartmouth community to tell him about the places that are special to them.

Exhibitions: In honor of the College’s sestercentennial year, the Hood Museum of Art will present an exhibition of 25 major new gifts of art ranging from individual works to entire collections, transforming the art that the Dartmouth community can see on campus and building on the leading collection established over Dartmouth’s first two-and-a-half centuries. In addition, a documentary film on early Dartmouth women is in the works.

Community Connections: In addition to campus- and community-wide celebrations, such as the football matchup against Princeton at Yankee Stadium on Nov. 9, events will be held for members of affinity groups and athletics team boosters. One such project is an oral history series called SpeakOut in which current students interview LGBTQIA+ alumni about their College experiences. Dartmouth also plans to convene international alumni and parents in the fall of 2019 through a series of Global Summits in planning for London, Hong Kong, Toronto, and Lima, Peru.

Dartmouth Undying is the commemorative book telling the Dartmouth story through a collection of essays and photographs edited by David Shribman ’76, trustee emeritus and executive editor of Pittsburgh Post-Gazette, and writer Jim Collins ’84, a past editor of Yankee Magazine. The book may be ordered in advance of its publication.