Acceptances Offered to Most Diverse Early Decision Group Ever

“These first members of the Class of 2023 are really remarkable,” says Lee Coffin. 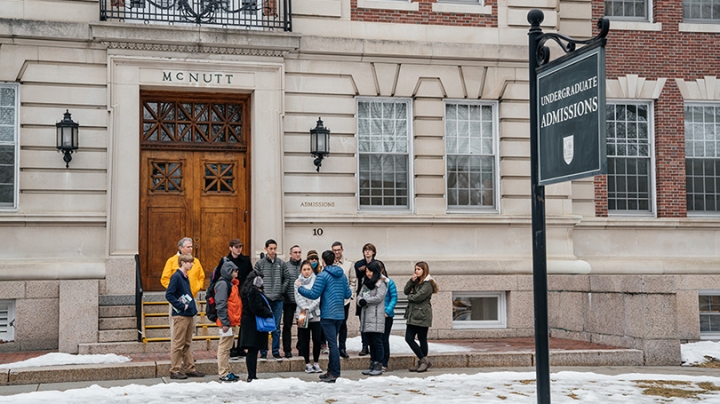 “These first members of the Class of 2023 are really remarkable,” says Lee Coffin, vice provost of enrollment and dean of admissions and financial aid. “Both cohorts were selected from record applicant pools, and their academic and personal narratives are amazing.”

Early decision applications to the Class of 2023 rose 9 percent to a record 2,474. This represents the fifth consecutive year in which early applications set an institutional record, as volume has soared 24 percent during the past two years alone.

“It is very exciting to see so many great students identifying Dartmouth as their college of choice,” Coffin says.

As part of the 2023 recruitment cycle, admissions officers visited nearly 1,500 high schools across the U.S. and in over 50 countries while hosting more than 10,400 prospective students in Hanover for a campus tour, information session or open house with faculty. Over 40 faculty from 22 departments participated in the new outreach initiatives that spotlight excellence in teaching.

The outreach initiatives paid off, as some of the applications made clear. “The demanding liberal arts programs’ depth and ability as well as Dartmouth’s mindset of cross-field research sold me,” a prospective philosophy and linguistics major from Memphis wrote.

In addition to the early decision increase, a record pool of high-achieving, low-income students listed Dartmouth as one of their QuestBridge Match options. The resulting match cohort of 25 students will be the largest to enroll at Dartmouth since 2011 when the College joined the QuestBridge partnership—a national access organization that helps identify talented students from low-income backgrounds and match them with top colleges and universities.

“QuestBridge continues to introduce Dartmouth to a vibrantly diverse group of impressive students from under-resourced schools and backgrounds,” Coffin says. “Each adds a rich personal narrative to the incoming class.”

The first wave of ’23s reflects what Coffin describes as “the shifting face of early decision,” as the demographics of the early pool and the resulting cohort of acceptances reflect “a much more heterogeneous portrait” than was previously the norm. Including the match cohort, the first invitations to join the Class of ’23 were extended to students in 44 U.S. states, Washington, D.C., Puerto Rico, Guam, and 29 countries. For the first time, California produced the largest number of early acceptances. In another geographic shift, the American West represents the largest domestic region at 22 percent. Eleven percent of the accepted student live abroad, with the most coming from the United Kingdom, Canada, and China.

The accepted cohort is evenly balanced by gender; a third are Americans of color and 138 are recruited athletes. Children of Dartmouth alumni represent 15 percent of acceptances; an additional 5 percent have non-parent relatives who are Dartmouth graduates or current students. Fourteen percent are first-generation college bound, a record high for Dartmouth.

Accepted students also post some of the strongest academic profiles the College has seen in the early rounds. When rank or class standing information is available, 94 percent are projected to graduate in the top 10 percent of their high school class, with 119 as the likely valedictorian or salutatorian, a new high. The mean SAT score rose 20 points to a new high of 1479, while the mean ACT composite remained steady at 32.

The socioeconomic background of the first members of the Class of ’23 also reflects the evolving pattern of early applications. Fifty-seven percent of accepted students applied for need-based financial aid and 13 percent are projected as eligible for a Pell Grant, federal awards offered to students from the lowest socioeconomic quartile. The Pell figure is also a record for the early rounds and reflects the growing presence of low-income students in the early pools.

“This expanded degree of socioeconomic access is an important new trend,” Coffin said. In addition to the College’s expanded partnership with QuestBridge, he credits increased travel and outreach programming by admissions and financial aid officers to schools and organizations serving under-resourced communities as well as the College’s adoption of MyinTuition, an innovative net-price calculator developed by a Wellesley economist and implemented at Dartmouth last year.

Dino Koff, director of financial aid, concurs with Coffin’s assessment. “Dartmouth’s generous financial aid policy continues to attract the best and brightest students from all backgrounds as our remarkable scholarship resources and steadfast commitment to meet the full need of each student ensure access to all.” Koff estimates that the College will award more than $10 million in need-based scholarships to these first members of the class, with an average scholarship of more than $52,000. Both are all-time highs.

Coffin projects a 96 percent yield on these initial 574 offers of admission, resulting in an enrollment of approximately 550 of the 1,150 seats in the next entering class. “The dynamism of these first offers of admission sets the stage for the next phase of the selection process as the admissions staff begins our evaluation of the regular decision pool in the coming days,” Coffin said. The deadline for regular decision is Jan. 2, with the final round of acceptances expected in late March.

“We’re ready for an interesting winter,” Coffin said. “And part of that will be the start of Dartmouth’s 12-month celebration of its 250th anniversary, which coincides with the matriculation of the Class of 2023.”