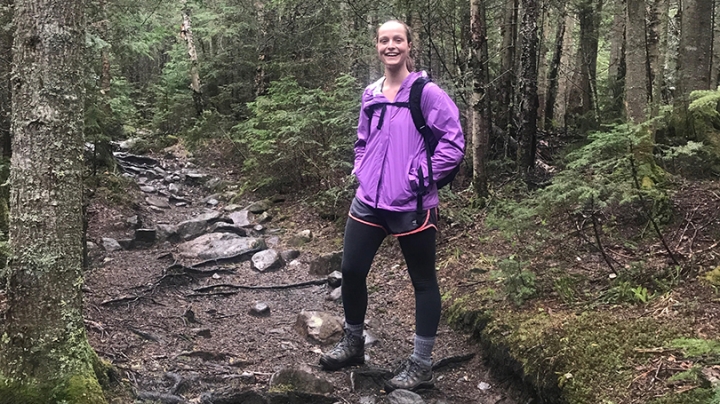 “For people who have their land in current use, they really have to be thinking long-term about land management, even longer than their lifetime,” says Alisa White ’17. (Photo courtesy of Alisa White ’17)
12/12/2018
Body

As an undergraduate, Alisa White ’17 conducted a survey of 992 Vermont forest landowners to assess their willingness to join a carbon offset program and generate carbon offsets from their forest land. Carbon offsets allow individuals and companies to offset their carbon footprints by investing in environmental projects around the world.

Her senior thesis was based on the survey, the results of which—yes, the landowners were interested—were reported in a recent issue of the journal PLOS One.

“Carbon offsets are a way to keep forests standing by creating incentives—paying people who own forest land to keep the trees,” says White, whose co-authors on the PLOS One paper included her adviser, Professor of Environmental Studies Richard Howarth.

The California Air Resources Board (CARB) establishes limits for carbon dioxide emissions for companies, says White, which must meet those limits “by either changing their technology, reducing their emissions, or buying credits to offset their emissions. The money from the California offsets can then be used to support carbon storage elsewhere, in places such as Vermont.”

In developing the survey, White spoke with landowners and land trusts—nonprofits that own land and work with landowners—as well as owners of larger tracts of land who don’t necessarily rely on the land for income. Many were interested in mitigating climate change while gaining revenue from their forest land.

“Most current offset program participants in New England are large landowners—people who have 2,000 acres or more,” says White, “but much of the land in New England is in smaller parcels, and these were the focus of my research.”

Living trees are known to absorb and store carbon—the main ingredient in the greenhouse gas carbon dioxide. The U.S. Forest Service reports that the nation’s trees take in about 750 million metric tons of carbon dioxide each year, an amount equivalent to 10 percent of the country’s annual emissions.

Offset programs offer people a chance to be paid to keep their forests standing despite other pressures to develop them or cut them down. However, small-scale foresters must sign a contract for a specified time period, and there are stipulations about how the forests are managed.

A drawback for some prospective participants is the long contract duration typically associated with these programs, with lengths of time commitment ranging from 20 to 100 years. “For people who have their land in current use, they really have to be thinking long-term about land management, even longer than their lifetime.”

As an undergraduate, White spent her sophomore winter in Ecuador, learning how forests in the Amazon are managed. She started thinking about New England forests and how management practices might mitigate climate change while offering the foresters new sources of revenue.

“Ecuador was a formative experience that encouraged my interest in forestry in general, and in carbon credit-offset programs in particular,” White says. “Carbon offsets are a way to keep forests standing by creating incentives—paying people who own forest land to keep the trees, to not cut them down, or to just selectively harvest.”

The Study and the Foresters

“Overall, we found that landowners significantly prefer working with a nonprofit organization,” the authors write in the PLOS One paper. “Based on monetary estimates of willingness-to-accept compensation, our results suggest that aggregated forest carbon offset projects incorporating small forest landowners could be piloted successfully in Vermont by nonprofit organizations.”

Jared Nunery, the forester for Orleans County in Vermont, says White’s study “provides helpful insight into understanding the variables impacting landowners interested in managing their land for both forest products and carbon storage. Understanding the financial thresholds impacting landowner participation in carbon offset programs is a critical component in evaluating viability of this work in Vermont. This study will be a valuable tool in furthering the discussion of the role our forests can play in mitigating the impacts of our changing climate.”

Tara Nolan, who owns forest land in northern Vermont, says she’s been interested in finding a way to make small, privately owned parcels more economically feasible. “As I am sure you know, there is no clear, easy path for most small landowners,” she says. “I own about 200 acres, of which 160 acres is under a conservation easement with the Vermont Land Trust, and I have a keen interest in being able to participate in the CARB market, or any other high value offset market.”

Pieter van Loon, director of forest stewardship for the Vermont Land Trust, finds the results encouraging “as we move forward with our own work on the subject of engaging Vermont forest land owners in carbon offset projects. The feedback we got from owners of conserved land and the general public after releasing our report perfectly aligns with Alisa’s conclusions.”

“The whole intent of this research was to reach out to forest land owners, land trusts, and Vermont legislators,” says White, who works for an environmental consulting firm in Cambridge, Mass. “I am happy to get the word out because there may be potential for carbon offsets in Vermont. I am hoping to spread the word and get people out there talking about it.”