The project will integrate experiential learning in engineering, computer science, and entrepreneurship. 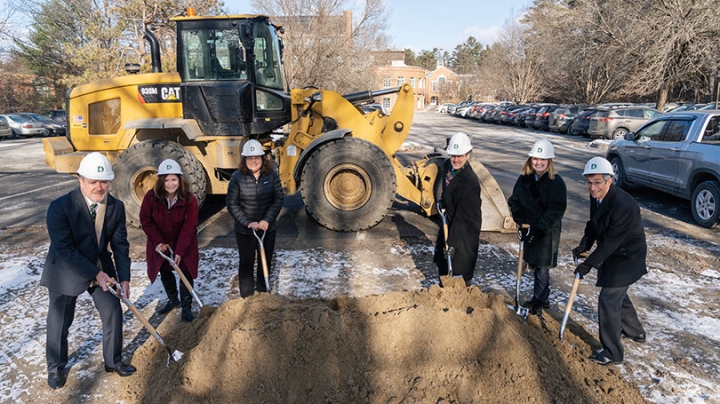 In photo above: Participating in a ceremonial groundbreaking recently were Terry McGuire, Thayer ’82, chair of the Thayer Board of Advisors; Christine Cook, Thayer’s chief financial and administrative officer; Laura Ray, interim dean at Thayer and a professor of engineering; David Kotz, the Champion International Professor in the Department of Computer Science; Liz Cahill Lempres ’83, Thayer ’84, Dartmouth trustee and Thayer Board of Advisors member; and Provost Joseph Helble.

When Dartmouth employees return to work after the holiday break, they’ll notice construction underway on the expansion of the west end of campus that will mean changes for those who usually park there.

The $200-million project, funded entirely through gifts to the College, will integrate experiential learning in engineering, computer science, and entrepreneurship in a new building to be shared by Thayer School of Engineering, the Department of Computer Science, and the Magnuson Center for Entrepreneurship. The Dartmouth Electron Microscope Facility will also be housed in the building.

Construction of a three-level, 340-car underground parking garage and loading facility—which will be located beneath the building—will begin in January. The building will be located on the Cummings parking lot land. The educational portion of the building will sit above the parking garage and will connect to the MacLean Engineering Sciences Center and Cummings Hall. Work on the above-ground portion of the structure is scheduled to begin in late 2019, with the building expected to open to students in the fall of  2021.

With the Cummings lot closed, Thayer and Tuck School of Business employees and graduate students will be able to park in the Ledyard lot, down the hill from the schools at the edge of the Connecticut River, and also in a 150-space lot directly across the river in Norwich. The Norwich property is referred to as Lewiston, which used to be the name of a village in that area in the town of Norwich. In addition, the Channing Cox lot, behind Thayer and Tuck, will be available for Thayer and Tuck employees. A shuttle bus will stop at the Lewiston and Ledyard lots and at Tuck Circle every 15 minutes between 7 a.m. and 7 p.m.

The parking changes on the west end won’t reduce the total number of parking spaces on campus, as new spaces were created this fall in several locations: 65 spaces were added to Channing Cox; 60 spaces were added on land near where the Gilman building was taken down on the north end of campus; and, also in that area, approximately 60 spaces have become available in the Dewey Field lot as Facilities, Operations and Maintenance vehicles and rental cars have moved to A Lot, which is located east of campus on East Wheelock Street, and has been expanded.

Thayer Drive, a short road off West Wheelock Street that leads to the west end of campus, will be closed to all but construction vehicles beginning Jan. 1, when Old Tuck Drive re-opens to traffic. Old Tuck Drive has been improved and widened during fall term and will be open to one-way traffic heading to campus off West Wheelock Street. Also, the pedestrian stairway near Thayer Drive will remain open during the construction period.

The west end project will include installation of sidewalks on West Street and a traffic light at the intersection of West Wheelock and West streets. The timing of the installation of the light, which will be handled by the town of Hanover, hasn’t been finalized.

The integration of engineering, computer science, and entrepreneurship in the new building will increase opportunities for collaboration as faculty and students share an open space designed to encourage informal conversation and meetings. The new building will feature a large atrium connected to student design spaces, making project work and studios visible to passersby.

Turner Construction, a national company, is building the new facility.

Information about the project is available on the Planning, Design and Construction website. Questions about the work can be directed to the planning office at pdc@dartmouth.edu.