‘Girls Who Code’ Get a Jump Start in Computer Programming

The club for young girls was started by Dartmouth technology staffer Nidhi Singh. 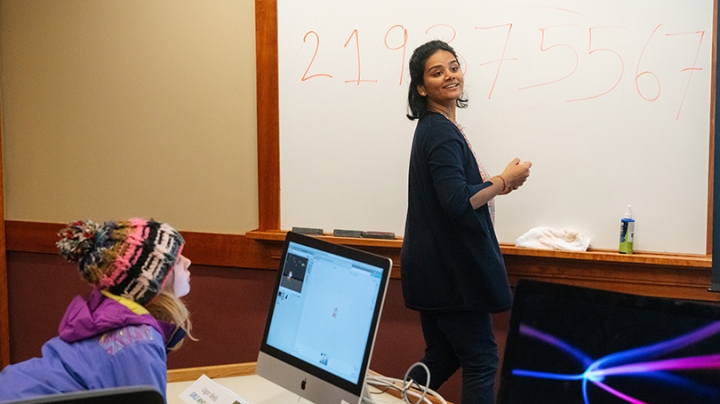 On a Thursday afternoon, in a Dartmouth computer lab, 20 girls from the Upper Valley, ages 8 through 13, tap keyboards, instructing the machines to make cartoon kittens and gremlins dance on their screens.

They’re members of “Girls Who Code,” a new after-school club started by Nidhi Singh, who works in Dartmouth’s Information, Technology, and Consulting Organization (ITC).  “Coding is converting human language to machine language, and girls as well as boys need to learn the many ways of doing that,” says Singh.

Growing up in India, Singh says, she didn’t know many women who made their living programming computers.

“It was really difficult for me to imagine myself entering the field until much later in life,” she says. Emigrating to the U.S. to attend the University of Vermont, Singh landed her job at Dartmouth soon after graduation. “My team deals with campus servers,” she says. “Right now, I spend a lot of time restoring email addresses for alumni after their student email expires.”

After hours, as a volunteer, she teaches children to code.

In the back row, waiting for class to start, 9-year-old Miyu McNamara logs in to a computer program developed at MIT called “Scratch.” To make a cat do a pirouette, she chooses from a list of simple commands and stacks them up like colored blocks in a tower. It’s a challenging trial-and-error process. Her father, Sean McNamara, looks over her shoulder as she works, but doesn’t intervene. McNamara, Dartmouth’s associate director for information security, co-facilitates this class with Singh and her ITC colleague Todd MacKenzie.

“Technology is the cornerstone of understanding everything,” says MacKenzie. “Getting a start on that is key. So when Nidhi came up with this idea I said, sure, I’ll jump in, and it’s been a great opportunity for my daughter.”

“At NASA,” Howard says in the video, “I was in charge of a small team of engineering scientists tasked with building robots that can navigate on Mars. The challenge was to make a robot that could think like a human. I was excited, but also nervous. This would be my first opportunity as a leader. As I walked into the room, I saw an older guy already there. He said, ‘The secretaries aren’t here; they moved their meeting down the hall.’”

Howard recalls reaching out her hand, smiling, and saying to the man, “Hi, I’m Dr. Ayanna Howard. You’re working for me on this project.”

Singh shows lots of video vignettes about women in science. “We want to shine that spotlight, and to say technology is for everyone,” she says.

“Girls Who Code” can also be the gateway to more advanced learning. According to the website, alumni of the coding clubs who have gone on to college are choosing to major in computer science or related fields at a rate 15 times the national average.

Because ages and abilities vary widely in this club, McNamara takes some girls to another lab to work on more advanced projects. Beginners stay put with Singh and MacKenzie. To teach a lesson about variables, MacKenzie projects on the screen three colored buckets. The buckets store variables—like first names, or ages—that a computer can use to follow flexible instructions.

Returning to “Scratch,” the girls apply this newfound knowledge to animate a cute, sprite-like creature. Their faces are serious at first, as they concentrate on their task, but success brings smiles.

“In my experience, girls don’t play video games as much as boys, so they tend to see computing as work,” says Singh. “Here, we want it to be fun.”