A year in the life of Dartmouth students, faculty, alumni, and staff. 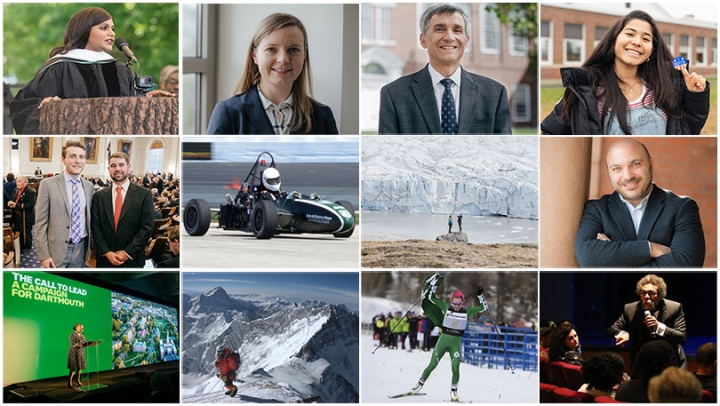 Dartmouth News stories, videos, and slideshows reached more than 660,000 readers this year from almost every country in the world—an increase of more than 25 percent over 2017. The site published 350 stories and 65 videos, garnering well over a million views.

In words and images, these stories paint a picture of the people and places that make Dartmouth extraordinary: scholars who love to teach and believe in the value and power of the liberal arts, and adventurous students who are using Dartmouth as a basecamp to follow their intellectual curiosity around the globe. The most popular feature? The commencement address delivered by writer, actor, and comedian Mindy Kaling ’01, which was viewed 85,000 times from the Dartmouth News website (and more than 300,000 times overall).

Here are some of highlights from the year past.

To keep up with Dartmouth News in 2019, subscribe to daily and weekly email updates. 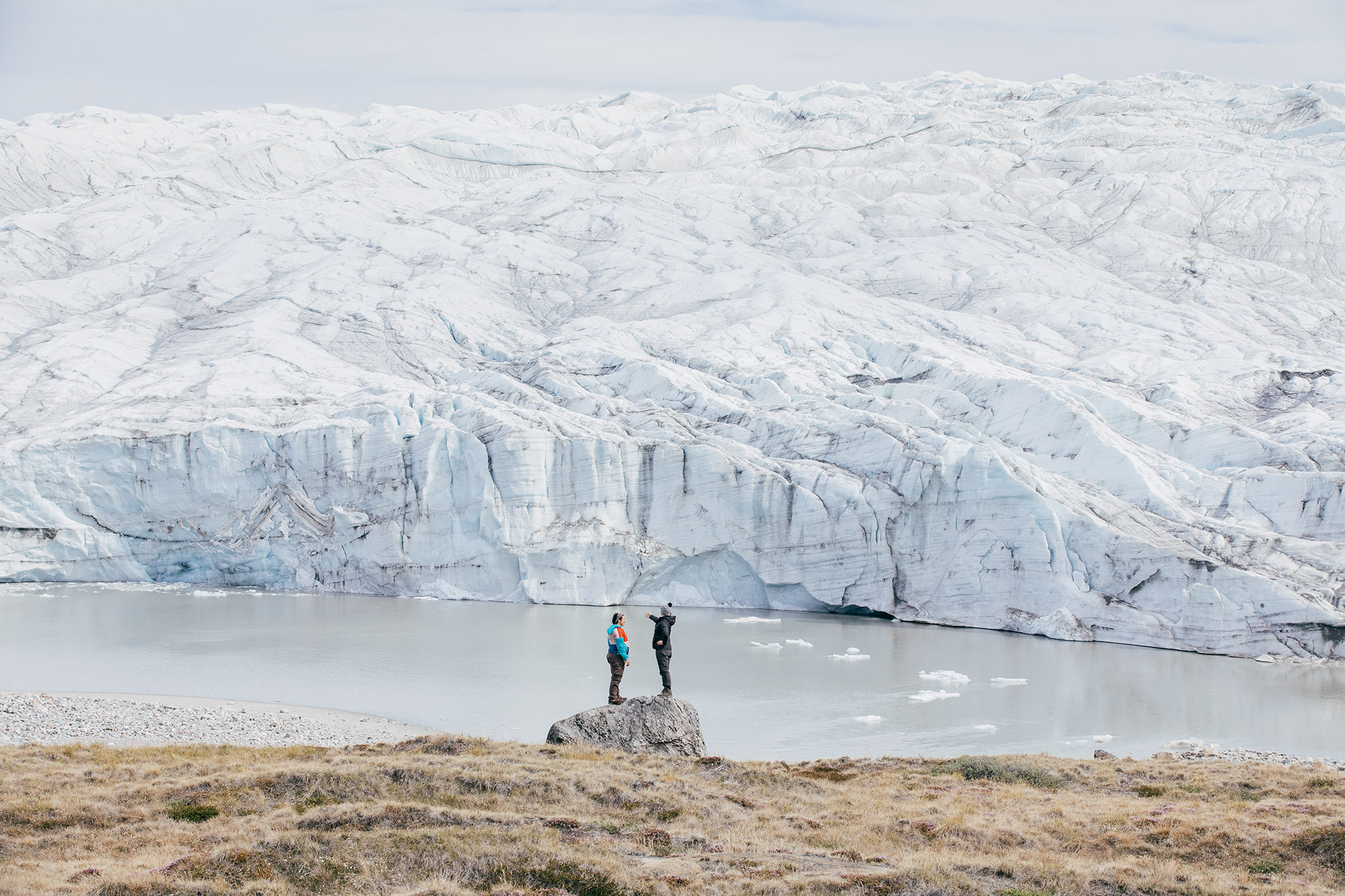 On a Dartmouth trip this past summer to Greenland, where Dartmouth scientists have spent at least a decade tracking climate change and doing other research, graduate student Melissa DeSiervo, left, and Alex Stendahl ’19 take a long look at the ice sheet. (Photo by Robert Gill)

On the World Stage

More than a dozen Dartmouth alumni and students competed in the 2018 Winter Olympics in Pyeongchang, South Korea, representing the United States, Bermuda, and Canada—the greatest number of Dartmouth athletes ever to march in the opening ceremony. Dartmouth News followed their Olympic journey from making the teams to competing in the Paralympics.

Alumni and students also competed in the political arena, standing for elections for everything from the U.S. Senate to the office of New Hampshire Secretary of State. In December, Dartmouth News was on hand in Concord, N.H., to see an alumnus and a member of the class of 2020 sworn in to the New Hampshire legislature.

Dartmouth News traveled to Greenland with students and faculty doing research on the front line of climate change. 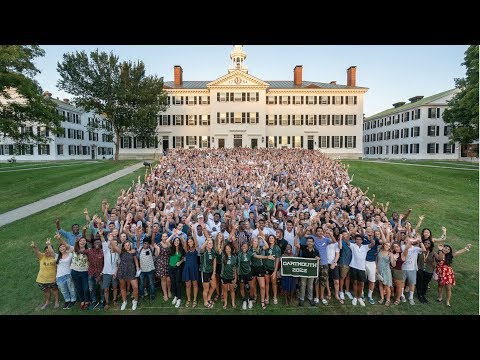 Thirty-five scholar-teachers joined the faculty this year, including four new members of the academic cluster initiative. Dean of Faculty Elizabeth Smith reported to the board of trustees on the College’s efforts to increase hiring of underrepresented minority faculty (up 2 percent over the previous year), part of the College’s Inclusive Excellence initiative. Eight members of the faculty were honored with endowed professorships. Among numerous achievements this year, faculty received Guggenheim awards and Sloan Fellowships; presented work at the World Economic Forum in Davos, Switzerland; interned at Google; made the short list for the National Book Awards; lit up giant screens in Times Square with avant-garde animation; and received funding to study treatments for opioid addiction. Dartmouth News also published in-depth interviews with chemist Katherine Mirica, economist Douglas Irwin, Arabic literature scholar Tarek El-Ariss, and philosopher Amie Thomasson.

Students did extraordinary things, including searching for a cure for cystic fibrosis, winning an award for the Formula Hybrid contest, staging original theater productions, and summitting Mount Everest.

The Class of 2022 joined the Dartmouth community this fall as admissions applications hit a five-year high (and the acceptance rate reached an all-time low). The ’22s were the first to experience new safety rules for the homecoming bonfire. The “most diverse early decision group ever”—and one of the strongest academically—has been accepted to the Class of 2023 after early decision applications rose by 9 percent. It’s the fifth consecutive year early applications set an institutional record, rising 24 percent in just the past two years.

In sports, Dartmouth athletes won big in skiing, women’s rugby, ultimate, and tennis—all while maintaining the highest graduation rate in the NCAA. Football led by hiring the first female coach in Division I. 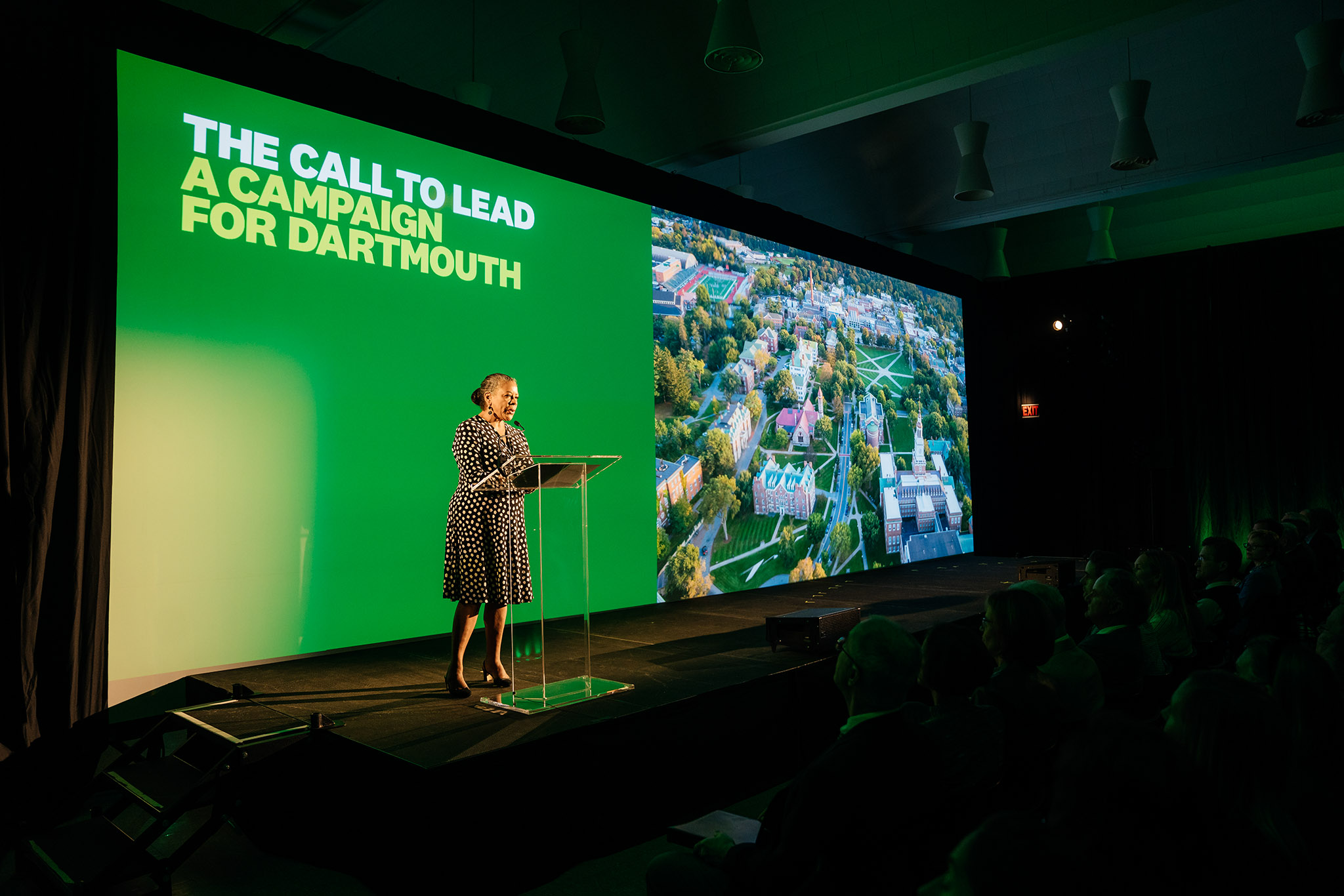 Laurel Richie ’81, chair of the Dartmouth Board of Trustees, speaks at the kickoff for the Call to Lead campaign. (Photo by Eli Burakian ’00)

Answering the Call to Lead

The Call to Lead—a comprehensive campaign to raise $3 billion to advance Dartmouth’s distinctive liberal arts model, pursue research with global impact, and prepare students for lives of leadership—was launched in April. The College announced several milestones toward those goals—including major gifts to name the Frank J. Guarini School of Graduate and Advanced Studies, to help eliminate student loans from financial aid packages, and to fund scholarships at the Tuck School for Business, as well as a new plan to redesign the west end of campus to better integrate engineering, computer science, and entrepreneurship.

There were some new faces in leadership roles on campus as the College hired Timothy Burdick ’89, MED’02, to direct outdoor programs, Sarah Palacios to direct the Native American Program, Rabbi Meir Goldstein to lead Dartmouth College Hillel, and Cheryl Bascomb ’82 as vice president for Alumni Relations. And some familiar faces also assumed leadership positions: Joe Helble, former dean of Thayer School of Engineering, took up the mantle of provost, while computer scientist David Kotz ’88, who had served as interim provost since late in 2017, was named a distinguished member of the Association for Computing Machinery. Professor of Sociology Kathryn Lively signed on as interim dean of the College. Professor of Mathematics Scott Pauls took over as director of the Dartmouth Center for the Advancement of Learning. Kristi Clemens was named Title IX Coordinator, Tracy Dustin-Eichler became director of the Center for Social Impact, and Professor of Engineering Laura Ray began serving as interim dean of Thayer. 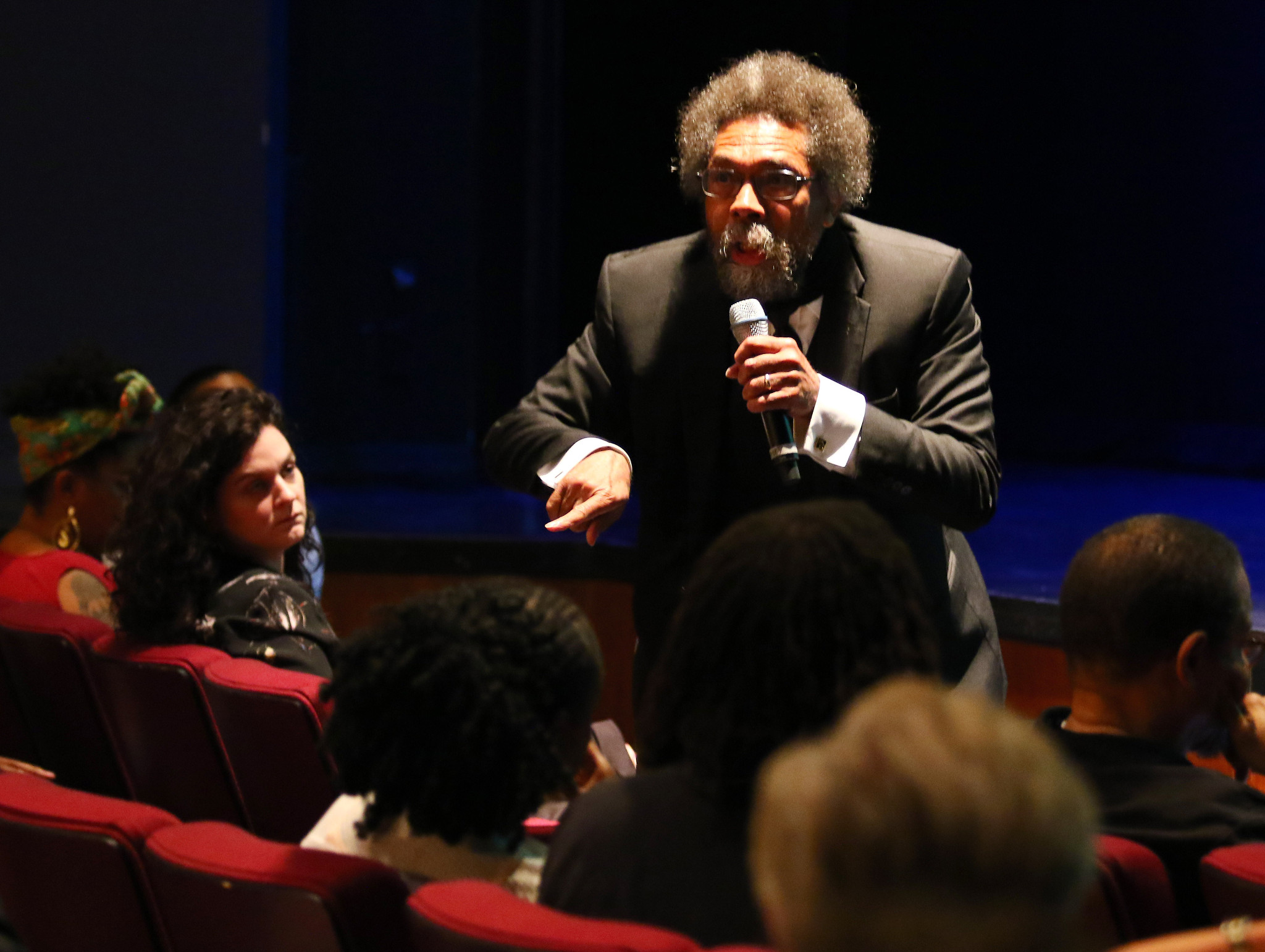 Professor of the Practice of Public Philosophy at Harvard Divinity School Cornel West speaks at the Race Matters conference to celebrate the 25th anniversary of the publication of “Race Matters,” West’s seminal analysis of race and democracy in America. (Photo by Herb Swanson)

On the Hanover Plain

Among the notable events on campus in 2018, Dartmouth hosted a conference celebrating the work of Cornel West and reconvened a historic summit on black theater first held in 1998, when theater legend August Wilson was a Montgomery Fellow. The Hopkins Center for the Arts was the stage for the U.S. premiere of the Stratford Theater Festival’s multimedia production of Shakespeare’s Coriolanus, which generated public conversation and master classes with faculty and members of the theater company. U.S. Secretary of Defense Gen. James Mattis met with students in September, Godfather father Mario Puzo’s papers came to Dartmouth Library’s Rauner Special Collections Library, and in the spirit of Fred Rogers ’50, Mindy Kaling ’01 reminded the Class of 2018 that “success isn’t a zero-sum game.”

This year, Dartmouth joined other universities in a brief defending DACA. The College formally repatriated bones excavated from Inuit gravesites in the 1960s, and a study group recommended moving the controversial Hovey Murals to storage. Heading into 2019, the College is preparing to announce a new plan to address sexual misconduct.

The Hood Museum of Art hired its first curator of Native American art. The museum has been closed for renovation since spring 2016, but staff moved back in this fall and have been hard at work installing art in the new galleries ahead of its Jan. 26, 2019, opening.

Steele Hall was closed for renovations over the summer, and solar panels were installed on eight College buildings. In other building and facilities news, the community gave input into where to site new residence halls. The public also weighed in on the future of the golf course. In September the trustees met to discuss options for both, and in November, the College received the green light to build a new indoor practice facility and expand the Friends of Dartmouth Rowing Boathouse.