Undergraduate and Alumnus Are Sworn In as State Lawmakers 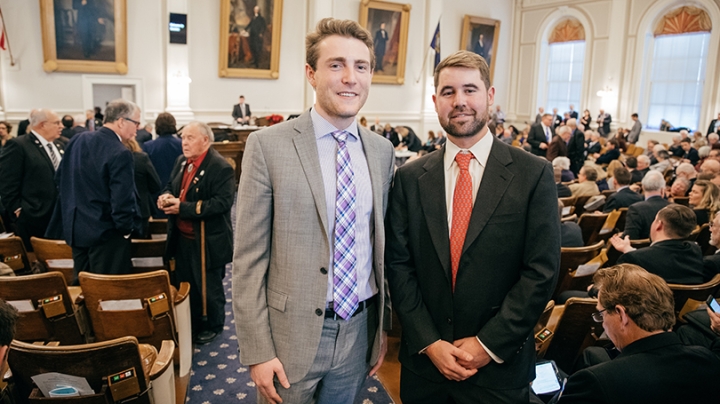 Democratic Rep. Garrett Muscatel ’20, left, and Republican Rep. Gates Lucas ’16, meet on the floor of the New Hampshire House during a break after being sworn in. (Photo by Robert Gill)
12/05/2018
Body

Dartmouth saw two of its own sworn in at the State House in Concord with the wave of young representatives who have changed the face of the New Hampshire legislature.

Recent alumnus Gates Lucas ’16, a Republican from Sunapee, and undergraduate Garrett Muscatel ’20, a Democrat from Hanover, were sworn in Wednesday by Gov. Chris Sununu during Organization Day, when all 400 of the new and returning state representatives take the oath of office together and begin the new session.

Chatting in the House chamber during a break after they were sworn in, Lucas and Muscatel agreed that being part of a freshman class of lawmakers that includes some 20 new representatives under the age of 30 is an important shift—it lowered the average age of New Hampshire state representatives from 66 years to 62.

“This new perspective is the biggest thing. The experiences we have and the things that affect us as young people in the state can speak to issues in a way that’s different from the older reps,” Lucas said.

Though the two come from different points on the political spectrum, they can find common ground in their life and College experiences. Both studied government at Dartmouth; Muscatel’s double major includes economics.

“There is definitely a generational gap in a lot of areas we will deal with in the legislature. This means for young people, there can be a shared perspective on some issues regardless of party,” Muscatel said.

A driving force in Muscatel’s decision to run for a House seat was opposition to new voting rules that he felt were aimed at suppressing the student vote. He was a strong supporter of the ultimately unsuccessful bid of Colin Van Ostern, Tuck ’09, to unseat 21-term Secretary of State Bill Gardner, who won another two-year term in a joint-session vote of the House and Senate, 209 to 205.

Although Muscatel was disappointed in the results, which followed extended debate and required a historic second ballot to settle, he has already submitted a bill to create a study committee on civic engagement. The proposal is to consider not only questions of voter access, but also more bipartisan issues such as lawmakers’ pay—$187 after taxes for a two-year term, paid in advance—and enabling working people to Skype into committee hearings for example, he said.

“It’s a really important issue. New Hampshire prides itself on having a citizen legislature, but we have a citizen legislature where only the elderly and the wealthy can serve. So trying to make it easier for young people to serve is something that really interests me,” he said.

Lucas started on his path to the legislature while at Dartmouth, where he worked on the campus campaign for John Kasich, the Republican governor of Ohio. After graduation, he worked on Chris Sununu’s first and second campaigns for governor. Although the November election swept in only the second Democratic majority in the New Hampshire house since the Civil War, Lucas, like Sununu, bucked this trend, defeating five-term Democratic incumbent Sue Gottling of Sunapee in a close race.

“Working for Sununu inspired me,” Lucas said. “He’s one of the youngest governors and a normal guy who wanted to serve New Hampshire, and that’s what I am also trying to do. I grew up in Sunapee and felt that I wanted to serve the town that I grew up in and the state and country that I love. So I decided this would be a good way to do that.”

One of the first bills Lucas filed would extend summer vacation for New Hampshire schools until after Labor Day, a proposal strongly backed by Sununu.

Both Muscatel and Lucas say they learned important lessons from their campaigns, Muscatel working with the New Hampshire Young Democrats and Lucas with the Sununu campaign. They both knocked on a lot of doors and spoke with many voters. And they were both inspired by the people they met.

“I found people are generally pretty happy when you knock on their door and you take the time and effort to go and see them,” Lucas said. “I think it’s a New Hampshire thing. That’s what makes New Hampshire great—that people take a deep interest in politics and are willing to have those conversations. I think that comes from being the first in the nation primary. People understand that New Hampshire is a model for the rest of the country.”