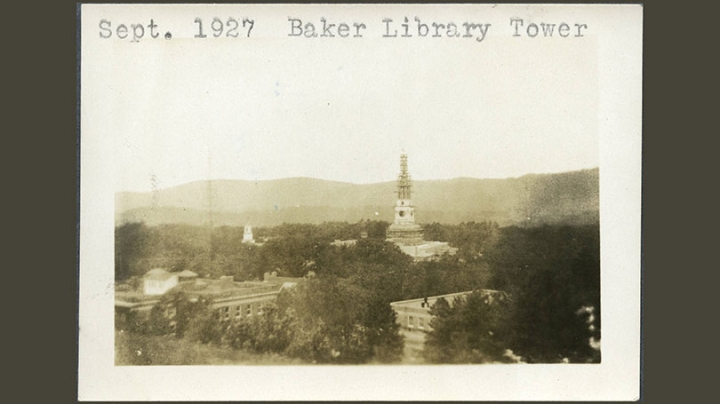 What is central to the Dartmouth experience? How does the College’s past inform its future?

Such questions befit a year of celebration at the College, which will be commemorating the 250th anniversary of its charter with events, symposiums, and courses throughout the coming year. The theme of the celebration is “Honoring Our Past, Inspiring Our Future.”

With five exhibits planned for its galleries over the course of this milestone year, including two that opened on Jan. 2, the Dartmouth Library is well positioned to contribute to ongoing conversations about identity and community that are expected to result from this period of celebratory reflection.

“This is an exciting time for the Dartmouth Library,” says Dean of Libraries Susanne Mehrer. “Our library is, as President Hanlon has noted, the lifeblood of Dartmouth’s liberal arts mission, both a treasured archive of Dartmouth’s long history and an essential part of taking this distinguished institution forward. We are thrilled to be part of celebrating Dartmouth’s 250th anniversary as we look toward the future.”

One of the first exhibits will be in the main hall of Baker-Berry Library. From Jan. 2 through March 21, On Solid Ground will explore the everchanging boundaries of the College’s “social, physical, and intellectual space.” As stated in its introduction, the exhibit hopes to “provide a kind of map of campus—one that shows the spaces that make up Dartmouth, but one that also shakes the illusion of stability and questions who and how these spaces serve.”

“Dartmouth’s identity has always been grounded in its physical space,” says Jay Satterfield, head of special collections and co-curator of the exhibit with College Archivist Peter Carini. “From the original motto, ‘Vox clamantis in deserto,’ to the Dartmouth Outing Club, Dartmouth has embraced its rural location and woodsy image. Combine that with the fact that the site of Dartmouth Hall has been a center for learning for 250 years, and you realize a kind of sacred space has been created. The irony, of course, is that it suggests utter stability, but Dartmouth has always been in flux.”

One exhibition case explores residential life at the College, with images from residence halls from the late-19th-century to coeducation in 1972. Other artifacts include a hand-drawn map by a first-year student from his first weeks in 1918, a photo of women visiting campus in 1967 for “The Great Day,” and traveling papers for new students making their way to Eleazar Wheelock’s Moors-Indian Charity School. 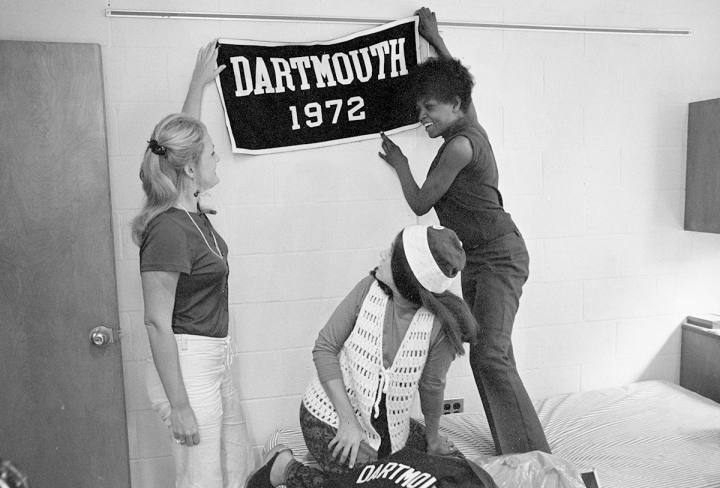 (Photo courtesy of the Dartmouth Library)

On Solid Ground covers territory familiar to the exhibit’s curators, as does another exhibit curated by Carini and also opening Jan. 2. In the Class of ’65 Galleries at Rauner Special Collections Library, Limits to Power: Daniel Webster and the Dartmouth College Case takes a look at the famous court victory of 1819, the year the College celebrated its 50th anniversary.

Satterfield and Carini acknowledge the ease of curating the exhibits, which both touch on topics that frequently serve as jumping off points in the class sessions that the Dartmouth Library staff offers students. “Most of the exhibits’ materials and artifacts have been used in classes over the past several years as we have worked with students to increase their understanding of both working with primary sources and Dartmouth’s complex history,” says Carini.

Considered a landmark ruling in the development of U.S. constitutional and corporate law, Trustees of Dartmouth College v. Woodward (1819) held that the College would remain a private institution and not become a state university. The court’s decision confirmed that the U.S. Constitution’s contract clause prohibits states from impairing a contract—in this case, Dartmouth’s charter.

Generations of Dartmouth students will have at least some familiarity with the 200-year-old case thanks to the oft-quoted words of Daniel Webster, Class of 1801, spoken during his argument on behalf of the College’s trustees: “It is, sir, as I have said, a small college, and yet there are those who love it!”

Asked about the case’s influence, Carini points to its application within recent cases before the Supreme Court. “The Dartmouth College case set up the concept of the private charitable organization in United States constitutional law. The case is also still referenced today as the basis for the protection of corporate persons under the Constitution, and has been cited in recent opinions such as Burwell v. Hobby Lobby and Citizens United v. FEC.”

Artifacts featured in the exhibit, which will be on display through March, include the notes and brief that Webster brought with him into the court. The exhibit will be of particular interest to attendees of the Dartmouth College Symposium planned for March 1 and 2. The schedule of the symposium, a joint effort by Conferences and Events, Alumni Relations, and 250th Academic Working Group, provides time each day for viewing the exhibit.

The Library’s commemoration of the milestone year is not limited to those who can make the trip to Hanover. The Library’s new podcast, Hindsight Is 20/19, was launched at the end of 2018 and will continue with new episodes throughout 2019. There will be 25 in all—one for each decade the College has been in existence—each detailing a different artifact from the College’s history.

In addition to the podcast, the Historical Accountability Program is another yearlong project that is already underway. It offers four term-long, full-time research fellowships for students who want to explore the Rauner Special Collections Library’s holdings and create original content based on primary sources. It’s part of Dartmouth’s Inclusive Excellence initiative, which is aimed at fostering a culture of inclusion. Caroline Cook ’21, the program’s first fellow, wrote a research paper and made a video about Hannah Croasdale, an associate professor of biology who became the first tenured female faculty member in the College’s history.